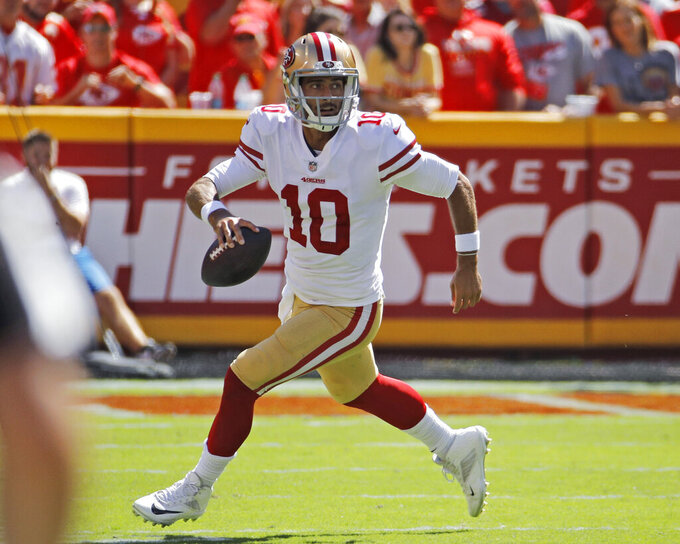 FILE - In this Sept. 23, 2018, file photo, San Francisco 49ers quarterback Jimmy Garoppolo runs with the ball during the first half of the team's NFL football game against the Kansas City Chiefs in Kansas City, Mo. Garoppolo has resumed throwing and taking drop backs as he rehabilitates from a major knee injury that derailed his first full season as San Francisco's starting quarterback. The process of coming back is going smoothly and Garoppolo hopes to be able to take part in seven-on-seven drills when the 49ers begin OTAs next month and be fully cleared by the time training camp starts in late July. (AP Photo/Charlie Riedel, File)

The process of coming back is going smoothly and Garoppolo hopes to be able to take part in seven-on-seven drills when the 49ers begin OTAs next month and be fully cleared by the time training camp starts in late July.

Once the season begins Sept. 8 in the opener at Tampa Bay, Garoppolo believes the only difference will be the brace he will wear on his surgically repaired left knee.

"I wore one initially as a rookie," he said. "Then, I kind of got away from it. I think this year it's a certainty. But, we'll see how it goes down the road."

Garoppolo said he doesn't believe the brace will impact his mobility a bit since the new ones are so lightweight that it's almost "like you're not wearing anything sometimes."

The 49ers are counting on Garoppolo being back to the player he was when they acquired him during the 2017 season from New England and he won his first five starts with the team to end that season.

He was rewarded with a five-year, $137.5 million contract that offseason to be San Francisco's franchise quarterback only to go down with the season-ending ACL injury in a Week 3 loss at Kansas City last season.

"I think initially probably was the hardest part, the acceptance of everything," he said. "The first couple weeks, really, you can't put any weight on it with the meniscus and all that stuff. Probably the first month or two was the worst. But, after that, you get running and everything and you start to feel like yourself again."

Garoppolo was helped in his rehab by the fact that running back Jerick McKinnon tore his ACL earlier in September and was a good guide and partner during the process that has continued throughout the offseason.

Garoppolo said it took some time to get the trust back in his knee, but now feels comfortable running and throwing the ball.

"It's encouraging," he said. "Every day gets easier and easier. Able to make this throw better than I was a week ago. It's small victories like that. Throughout the whole process, it's all about small victories because you're not going to jump out and be able to throw it 60, 70 yards again. Small victories."

Having a healthy Garoppolo and McKinnon will be key this season for the 49ers, who are coming off a 4-12 season in coach Kyle Shanahan's second year with the team.

Shanahan let the players know as they gathered this week for the start of the offseason program that improvement is necessary.

"His big thing was the past couple of years we really needed to get the culture and everything," defensive lineman DeForest Buckner said. "He feels like the culture is here and we have the talent. Now we have to go out and execute. We had setbacks on the way, especially last year. We had big expectations for the team and we didn't achieve those expectations and those goals."

Buckner was one of the few bright spots for the Niners last season with a career-high 12 sacks. The seventh overall pick in the 2016 draft proved he was a foundation piece for the 49ers.

Now the team will have to start planning on how to keep Buckner. He is eligible for a contract extension this summer if the 49ers want to lock him up long term before he can become a free agent following the 2020 season.

"We had conversations here and there," Buckner said. "It's very early. Just because I'm eligible for a new contract going into my fourth year, it's still very early in the process."