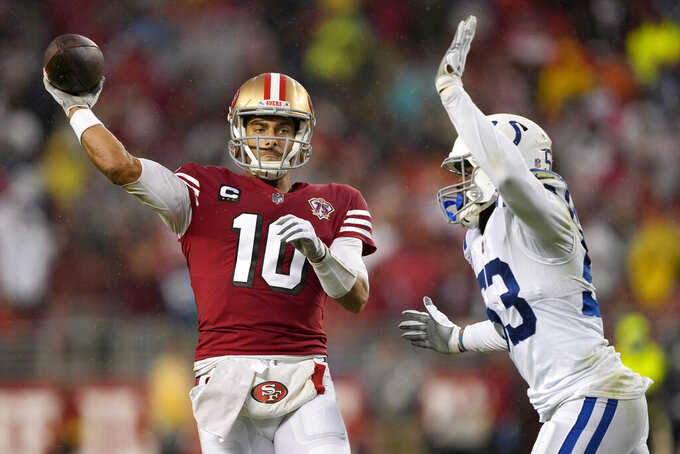 SANTA CLARA, Calif. (AP) — When San Francisco traveled to Chicago four years ago, it was a memorable homecoming for quarterback Jimmy Garoppolo, who made his starting debut for the 49ers that day.

Now, as the Niners head back to the Windy City near where Garoppolo grew up, the excitement and promise of Garoppolo being the new franchise quarterback has been supplanted by time ticking down on his hold on the starting job in San Francisco with rookie Trey Lance waiting in the wings.

“Well, we’ve come a long way,” Garoppolo said Wednesday. “A lot’s happened in four years here. It’s pretty cool though. Just to go back there, talking to friends and family about it, and it’s a cool experience. You know, a lot of memories come back when I think to the last time we played them.”

Garoppolo went 26 for 37 for 293 yards and led the game-winning drive for a field goal that day in a 15-14 win. That started a run of five straight wins to end the season and helped earn Garoppolo a $125 million, five-year contract in the offseason.

That was followed by a season-ending knee injury early in 2018, a Super Bowl run the following season and then an injury-plagued 2020 that led to the decision by San Francisco to search for his replacement. The Niners traded three first-round picks this past spring to draft Lance third overall.

The plan for 2021 was to keep Garoppolo as starter and groom Lance to replace him as the Niners hoped to contend for a Super Bowl again.

Four straight losses have left San Francisco looking up at the contenders in the NFC but haven't sped up the timetable just yet to make a change to the untested Lance, who started only 15 games in college at lower-level North Dakota State.

“I get that because we’ve lost four games in a row and we’re sitting here at 2-4 and that’s the easy thing to talk about, but that’s not a very smart thing of us,” coach Kyle Shanahan said of making a change. "You don’t just do that because you’re not playing the way you want to play and think you’re just going to put in a rookie and he’s going to be the answer to everything. I don’t think that’s fair to him and I don’t think that’s right for our team.”

Lance also is working his way back after spraining his left knee in his one start at Arizona on Oct. 10 when Garoppolo was hurt. Lance returned to practice on a limited basis Wednesday.

Shanahan said Lance could ramp up his work if he comes out of his first practice feeling healthy and could be used in a situational role on Sunday if he has no setbacks this week.

Lance played seven snaps the first three weeks in a limited role before getting more action when Garoppolo injured his calf in Week 4 against Seattle. In six quarters against the Seahawks and Cardinals, Lance went 24 for 47 for 349 yards, two TDs and one interception, and had 130 yards rushing.

Then the knee injury slowed his progress.

“I think it was real unfortunate that, at the time he got to play, I thought he was ready to take off a little bit after that getting that experience,” Shanahan said. "I thought that that was going to be great for him to come back the next week, especially with Jimmy banged up a little bit, but he had an unfortunate injury and it’s lasting a little longer than expected. So, I’m excited to get him out there today. But he hasn’t done anything in a couple of weeks, so we’ll see where his progress is now.”