Garoppolo returns to practice for 49ers on limited basis 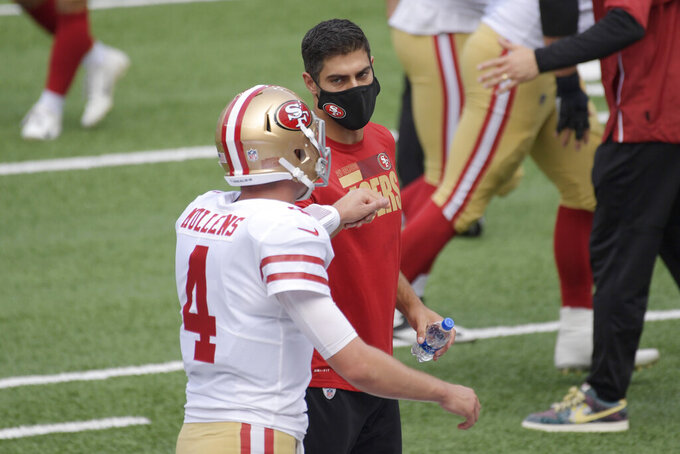 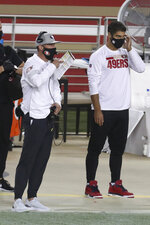 SANTA CLARA, Calif. (AP) — Quarterback Jimmy Garoppolo returned to practice on a limited basis for the San Francisco 49ers on Wednesday after missing two games with a sprained ankle.

Coach Kyle Shanahan said the fact Garoppolo is able to practice for the first time since injuring his ankle in a Week 2 win against the New York Jets is an encouraging sign that he will be able to play Sunday against Miami.

“The fact he’s coming out today and going a little more reps, it has,” Shanahan said when asked whether his outlook on Garoppolo’s status has improved. “I haven’t seen him yet. He did a good job at walkthrough. We’ll see how he goes."

If Garoppolo isn’t ready to play for the 49ers (2-2) against the Dolphins (1-3), Shanahan isn’t ready to reveal which backup will start in his place.

Nick Mullens played well during the first game Garoppolo missed, throwing for 343 yards and a touchdown in a 36-9 win over the Giants. But Mullens struggled last week in a loss to Philadelphia, committing three turnovers in the game.

C.J. Beathard replaced him late in the 25-20 loss and went 14 for 19 for 138 yards, leading a TD drive and getting San Francisco in position for a desperation pass into the end zone on the final play.

Shanahan said he doesn’t want to give the Dolphins any hints, but the Niners are hoping it’s Garoppolo. San Francisco has a 20-6 record when Garoppolo starts, compared to a 5-21 mark with any other quarterback since Shanahan arrived in 2017.

Garoppolo threw for 3,978 yards and 27 TD passes last season to lead the Niners to 13 wins and was 33 for 49 for 390 yards, four TDs and no interceptions in six quarters this season.

In other injury news, running back Raheem Mostert was also back at practice on a limited basis after missing two games with a knee injury. His return would spark a running game that has gotten only 61 yards per game and 2.71 yards per carry from running backs the past two weeks.

The Niners are dealing with a new injury on defense with safety Jimmie Ward nursing a sore wrist that forced him to miss practice Wednesday. Shanahan remains hopeful he will play Sunday.

Top cornerback Richard Sherman remains on injured reserve with a calf injury. He was eligible to be activated this week but now the Niners are hoping he will be back for next week’s game against the Rams.