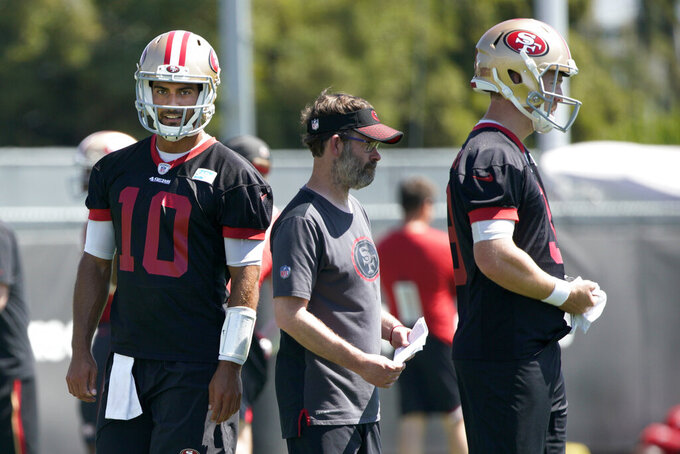 The 49ers coaching staff allowed Garoppolo to participate in seven-on-seven passing drills but not 11-on-11 team drills. So backup quarterbacks C.J. Beathard and Nick Mullens split time with the starters.

Those two are competing to be the 49ers' No. 2 quarterback behind Garoppolo next season. Of the two, Beathard has played particularly well this offseason, said coach Kyle Shanahan.

"C.J. has had a hell of a camp," Shanahan said Wednesday. "You can't fully know how much better he has gotten until game time when you know they can tackle him, but C.J. has gotten more and more comfortable, more automatic. He knew the offense right when he got here and now, in his third year, he has a lot more reps than he did last year."

Beathard started five games in 2018 after Garoppolo tore his ACL against the Kansas City Chiefs on Sept. 23. In five starts, Beathard threw eight touchdown passes, seven interceptions, passed for 1,252 yards, posted a quarterback rating of 81.8 and lost all five games. During his fifth start, an 18-15 loss to the Arizona Cardinals, Beathard injured his right wrist and did not play the rest of the season.

Beathard said he believes the quarterback competition during minicamp has brought out the best in him. "I really do," he said. "Anytime you have competition, especially from good players, it makes you better."

Mullens has responded to the challenge, too.

"The biggest thing is just playing decisive football," Mullens said. "How quickly can you make your decisions? How quickly can you skip a read to get to the next read because you know it's going to be open? That's one thing that helps me play my best. Throughout camp, I've just tried to be quick on my decisions, and I think it has helped."

Mullens signed with the 49ers as an undrafted free agent in 2017 and became their starting quarterback after Beathard injured his wrist in 2018. Mullens started the final eight games of the season, passing for 2,277 yards with 13 touchdowns and 10 interceptions. He posted a quarterback rating of 90.8.

Of all the quarterbacks who have started 16 or fewer games in the NFL, only Cleveland Browns quarterback Baker Mayfield — the first pick of the 2018 draft — had a higher passer rating than Mullens last season. Mayfield's rating was 93.7.

"(Mullens and Beathard) have both proven they can play in this league," Shanahan said. "We're going to have to make a tough decision at the end of preseason to which one we want to give that No. 2 job. You don't get to compete much during the season. There's not enough reps. You hope Jimmy stays healthy so it's irrelevant who's the No. 2 guy. But the No. 2 guy does get a lot more reps in practice (than the No. 3 guy), so that's going be very important for them."

The 49ers expect to keep all three quarterbacks on their 53-man roster for the regular season. So the competition may continue after training camp.

Beathard and Mullens like competing against each other. They even golf together every weekend.