Garrett backs up words, Browns hang on to beat Ravens 24-22 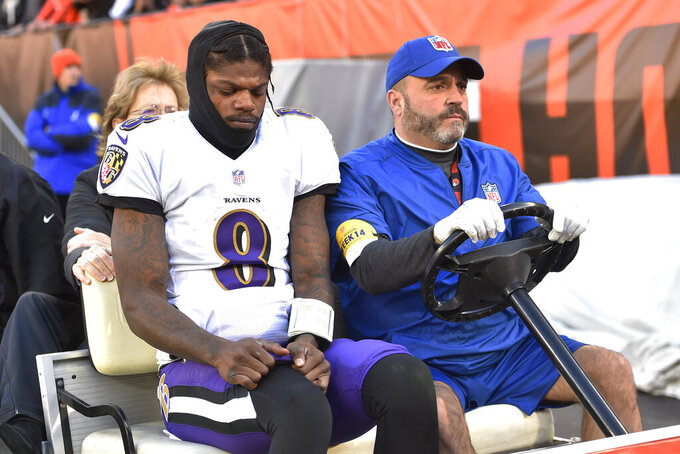 Baltimore Ravens quarterback Lamar Jackson (8) is carted off the field after an injury during the first half of an NFL football game against the Cleveland Browns, Sunday, Dec. 12, 2021, in Cleveland. (AP Photo/David Richard)

CLEVELAND (AP) — Myles Garrett wasn't going to let this season escape his grasp — or get away from the Browns.

Displeased with an overall lack of focus during practice last week, Cleveland's star defensive end spoke up and challenged his teammates, urging them to do more, pushing them to be better.

Garrett backed up his words.

He scored his first career TD and Baker Mayfield threw two touchdown passes as the Browns stayed in the thick of the AFC playoff race, surviving Baltimore's late comeback for a 24-22 win Sunday over the Ravens, who lost superstar quarterback Lamar Jackson with a sprained right ankle.

Garrett stripped Ravens backup QB Tyler Huntley, scooped up the fumble and rambled 15 yards for a TD in the first half as the Browns (7-6) built a 24-3 lead and held off the injury-riddled Ravens (8-5).

Following Friday's practice, Garrett made some pointed comments toward his teammates that some interpreted as trouble inside Cleveland's locker room. Instead, it seemed to be a message of inspiration.

“That’s the type of player Myles is,” said cornerback Denzel Ward, who made a tackle to stop Baltimore's final drive. "He’s a leader for our team. That’s what he’s got to do. He challenged everybody. Even though he challenged us, Myles, he’s going to come in and back it up, though, as well.

“He’s going to go out there, make plays. We needed it.”

Garrett said he didn't worry about any negative feedback about his remarks. His teammates knew they were well intentioned.

“I’ve got to stand there for what I want out of this team and what we want to achieve and if I have a vision, I want everybody to be part of it and I’m going to lead it,” he said.

Healthier than he's been in weeks following Cleveland's bye, Mayfield connected with Jarvis Landry and Austin Hooper on first-half scores as the Browns avoided fading out of the playoff picture.

Of course it helped that Jackson went down on the first play of the second quarter and didn't return.

The 2019 NFL MVP was unable to put any weight on the ankle, a frightening and concerning sight for the AFC North-leading Ravens, who have been overrun by injuries this season.

“When Lamar went down, I started becoming more aware of the situation,” said Huntley, who started for an ill Jackson on Nov. 21 at Chicago. “I knew at that moment I had to lock in. And after that fumble, I was very locked in because I couldn't make any more mistakes.”

Huntley spent much of the second half scrambling from trouble, but he kept Baltimore close and the Ravens, who trailed 24-6 at half, pulled within 24-22 on Huntley's 8-yard TD pass to Mark Andrews with 1:17 to go.

Baltimore then recovered an onside kick, but couldn't convert on fourth-and-6 as Ward tackled receiver Rashod Bateman well short of the marker and the Cleveland crowd could finally exhale.

Ravens kicker Justin Tucker made field goals of 50, 42 and 55 yards.

The Browns opened their 21-point lead late in the second quarter when Garrett set Cleveland's single-season sacks record in style — scoring on the play.

With the Ravens at their own 20, Garrett got around left tackle Alejandro Villanueva and knocked the ball free from Huntley. Garrett scooped it up and went down the left sideline for the score.

“It was a great play,” said Browns end Jadeveon Clowney, who had a key late sack. “I was trying to tip it to myself. I saw him come up there and get it and I was like, ‘You’ve got the whole trifecta — the sack, the fumble recovery and the touchdown.’

“Great play by a great player.”

Moments after his TD, Garrett was shown on the giant scoreboard, the star shook his head and said, “I'm not done.”

Neither are the good-one-week-bad-the-next Browns, whose postseason chances would have been badly damaged with a loss.

“We don’t want to be going into the building these last four games for nothing,” Clowney said. “We know we’ve got something to keep playing for right now.”

Garrett broke the club sacks record he came in sharing with Reggie Camp (14, 1984). The Browns have players with higher numbers, but the league didn't count sacks as an individual statistic until 1982.

Browns: RB Kareem Hunt hurt his left ankle while making a third-down catch in the first quarter. It was Hunt's second game back after missing five with a calf injury. ... Mayfield was checked for a concussion and cleared in the third quarter. Backup Case Keenum replaced him for one play.

Browns: Are home against Las Vegas on Dec. 18, the first of two consecutive Saturday games.