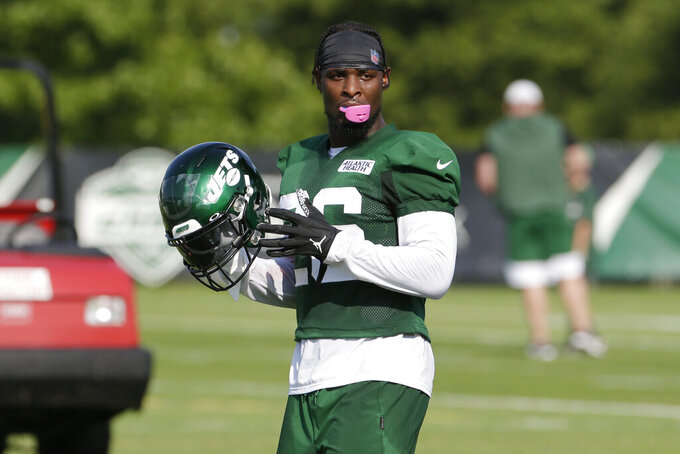 FILE - In this July 25, 2019, file photo, New York Jets running back Le'Veon Bell participates during practice at the NFL football team's training camp in Florham Park, N.J. Bell's debut with the New York Jets will not come until the regular season after Adam Gase announced the star running back will be held out of the final two preseason games. Gase says Sunday, Aug. 18, he was leaning toward that decision, but a season-ending knee injury to linebacker Avery Williamson in the Jets' preseason loss at Atlanta on Thursday night sealed it. (AP Photo/Seth Wenig, File)

EAST RUTHERFORD, N.J. (AP) — Le'Veon Bell will have to wait a little longer for his debut with the New York Jets.

Coach Adam Gase announced Sunday night that the star running back will be held out of the team's final two preseason games.

"I was about 99% sure heading into the preseason," Gase said after the Jets' practice at MetLife Stadium. "It was all based off of how he practiced, conditioning and all those types of things."

Gase and Bell spoke about the plan when training camp started, and Bell's snaps increased in practiced last week.

Bell has been practicing fully and looked good in training camp after sitting out all last season in a contract dispute with Pittsburgh. Gase and the Jets don't want to take any unnecessary risks with Bell.

"We'll just get him as game ready as possible," Gase said. "He's not really going to know until we get into a real game, but I feel like he's in great shape and he's been contacting about as good as anybody on the practice field.

That would be the regular-season opener against Buffalo on Sept. 8. It will mark the first time Bell will play in a game since the Steelers' playoff loss to Jacksonville on Jan. 14, 2018 — a span of nearly 20 months.

"I'll see y'all in September," Bell wrote on Twitter about an hour after Gase's announcement.

Gase acknowledged that a season-ending knee injury to linebacker Avery Williamson in the Jets' preseason loss at Atlanta on Thursday night sealed his decision to sit Bell until the regular season.

Williamson tore the anterior cruciate ligament in his right knee with 3:52 left in the first half with mostly backups playing. Cornerback Tevaughn Campbell dived to defend a pass in the end zone and hit into the linebacker's knee.

An MRI on Friday revealed the severity of the injury, and Williamson was placed on injured reserve Saturday.

Gase took the blame for leaving Williamson in the game as late as he did, and said he regretted doing so.

Williamson was playing a new position with the starters at weakside linebacker this season instead of middle linebacker with the arrival of C.J. Mosley. Williamson remained in the game with the second-team defense because backup Neville Hewitt is also playing a new spot, and Hewitt would benefit from the veteran's presence on the field.

"Just looking back on it and hindsight's 20/20, but I wish would've gotten him out of there a series earlier," Gase said. "But, I've talked with him, and it's on me."

Recently unretired center Ryan Kalil practiced in team drills for the first time since signing with the Jets nearly three weeks ago.

The 34-year-old Kalil had retired after last season, his 12th with the Carolina Panthers. He has been working to get into football shape, and took the snaps with the first-team offense Sunday night.

Kalil said he is still getting used to quarterback Sam Darnold's cadence, which led to a couple of bad snaps, and doesn't quite have the offensive playbook down yet.

"They don't have a Rosetta Stone for this, so it's like learning a new language," Kalil said.

Gase said he's hoping to play Kalil in a series in the Jets' next preseason game Saturday night against New Orleans.

"I love football, I just do," he said. "We all do. It took me walking away to know that it was done, that I really wanted it to not be done just quite yet. I'm so fired up."

S Marcus Maye (shoulder) has shed the red no-contact pinnie and is a full participant at practice. ... LB Jamey Mosley (knee) didn't practice. ... LB Harvey Langi (knee) is set to return this week. ... RT Brandon Shell sat out the game at Atlanta after injuring a knee in practice, but should be OK. "It was probably more of a scare than anything," Gase said.