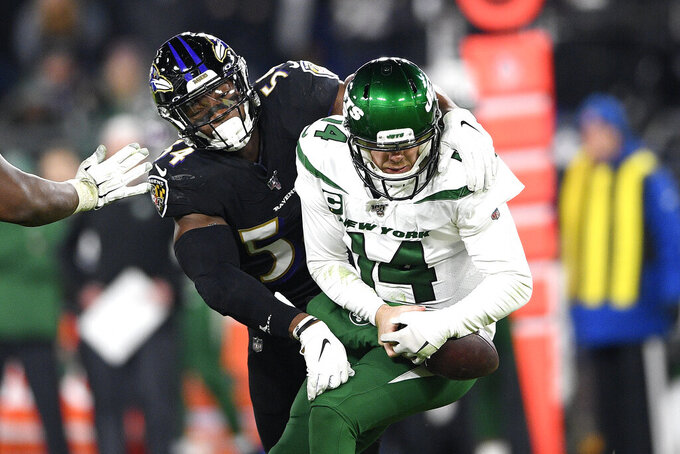 NEW YORK (AP) — The game was all but over when the New York Jets faced fourth-and-1 in Baltimore territory and Sam Darnold's hurried pass was knocked away from Jamison Crowder.

A frustrated Darnold trudged to the sideline, where he was met by an equally exasperated coach Adam Gase.

With the Jets trailing 42-21 — the eventual final score — with just over four minutes left Thursday night, Darnold and Gase were caught by TV cameras having an animated discussion. There was some questionable body language by Darnold, the video went viral on social media, and many wondered: Was this the moment the relationship between the franchise quarterback and the beleaguered head coach finally cracked?

“We were both in the same mind frame, where somebody didn't execute their job," Gase explained Friday, “and basically I was (talking) about that and he was doing the same thing."

Darnold echoed his coach, insisting there was no disagreement between the two.

“For me, where we were at in the game, especially not executing, especially on a fourth down, a really key down, I was just frustrated about the circumstance," Darnold said. “It wasn't anything more than that. We were just having a conversation about not executing the way that we were supposed to and that was really it."

Neither Darnold nor Gase would say who didn't get the job done on the play, but video of the play shows tight end Daniel Brown not blocking Jaylon Ferguson — who ran free and caused the quarterback to hurry his throw.

Adding to the buzz was backup quarterback David Fales' wide-eyed expression while Darnold and Gase were chatting.

“I mean, David always kind of has that weird look on his face anyway," Darnold joked. “We were not in a disagreement at all. It was just me being frustrated, again, in kind of the circumstance of what was going on in the game at the time."

It was that kind of night for Darnold and the Jets, who dropped to 5-9 and assured themselves of a losing record for the fourth straight season.

New York came to Baltimore having won four of five, but was no match for the dynamic Lamar Jackson and the AFC North champion Ravens. From beginning to end, it was clear the teams are in way different classes at the moment.

And the Jets have lots of work to do to even get close.

“We just knew what kind of game we had to play," Gase said. “We just didn't play a complete game. We knew we had to play a specific way to beat a team like that."

The Jets' training staff — probably around the clock. New York has a league-leading 16 players on injured reserve, with tight end Ryan Griffin the latest to join the walking wounded a few hours before the game after injuring an ankle last Sunday. Offensive lineman Brent Qvale was activated from IR to take Griffin's roster spot, but injuries to key players has been a theme all season. Among the starters sidelined: linebackers C.J. Mosley and Avery Williamson, wide receiver Quincy Enunwa, cornerback Trumaine Johnson, tight end Chris Herndon, guard Brian Winters and center Ryan Kalil.

The strength of the team all season has been rolled on in two straight games. The Jets went into their matchup Sunday against Miami with the NFL's top-ranked run defense, but allowed 122 yards on the ground — including 65 by 37-year-old quarterback Ryan Fitzpatrick. It got worse against Baltimore and its No. 1 rushing attack, with New York giving up a whopping 218 yards, Jackson running for 86 and Mark Ingram getting 76.

The common denominator in both performances has been the absence of safety Jamal Adams, the defensive leader who has missed the first two games of his NFL career with a sprained ankle.

Tarell Basham. With so many injuries on defense, the third-year outside linebacker is getting opportunities to make plays and took advantage Thursday night. Basham had his second sack of the season, tying a career high. He also had the biggest play on special teams with a blocked punt that was recovered by B.J. Bello for a touchdown.

Sam Ficken. He has been alternating all season between the “Stock Up” and “Stock Down” lists — not ideal for your kicker. Four days after hitting a winning 44-yard field goal to beat Miami, Ficken missed an extra point (his third of the season) and had a 49-yard field goal attempt blocked.

Gase said Adams and rookie DL Quinnen Williams (neck) both have a chance to return to practice next Wednesday on a limited basis. ... WR Jeff Smith suffered a high ankle sprain in his NFL debut Thursday night and will miss the rest of the season — and likely join the Jets' lengthy IR list.

2 — The number of turnovers Darnold had against Baltimore, with both being crucial mistakes. With the Jets trailing 21-7 just before halftime and at the Ravens 25, Darnold's throw intended for Brown was intercepted — keeping it a two-score game. About 10 minutes into the third quarter, Darnold was sacked and fumbled, with Baltimore recovering. Two plays later, the Ravens scored to make it 28-7 and putting the game out of reach.

After two games in five days, the Jets have some time to heal up a bit and prepare for their final home game of the season against the Pittsburgh Steelers — whose loyal and well-traveled fans are sure to fill out MetLife Stadium on Dec. 22.