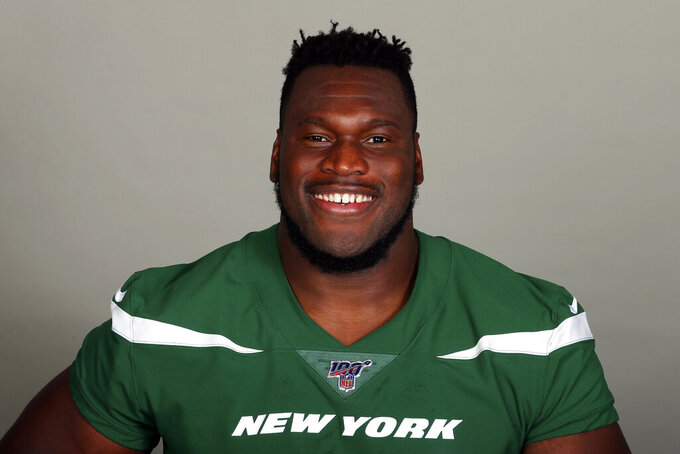 FILE - This is a 2019, file photo, shows Kelechi Osemele of the New York Jets NFL football team. Osemele says he needs season-ending shoulder surgery and is waiting for the team to authorize the procedure. Osemele said Friday, OCt. 18, 2019, that the team doctor and an outside doctor have both recommended the surgery. But a person with direct knowledge of the situation tells The Associated Press both doctors determined it is actually a pre-existing injury and cleared Osemele to play through the injury and not have the surgery until after the season. (AP Photo/File)

FLORHAM PARK, N.J. (AP) — Adam Gase is keeping the focus of his team on the field, not the escalating feud off it.

The New York Jets coach opted Thursday to not address the standoff between the team and guard Kelechi Osemele, who is having surgery on his right shoulder Friday — whether or not the team approves it.

"You have to ask those guys," Gase said, referring to general manager Joe Douglas and the Jets' front office. "I haven't been involved in this. My job is to coach the team."

Osemele says he needs surgery now on his torn labrum and can't play through the pain, while the Jets think the guard can hold off and remain on the field, based on medical reports.

New York has been fining Osemele for sitting out practice, which he did again Thursday, saying it is "conduct detrimental to the team." Osemele and his representatives have filed a grievance against the Jets. The team had not yet approved Osemele having the surgery.

The NFL Players Association released a statement Thursday saying it supports Osemele and is "considering all options to protect" him. The NFLPA also says it's "not appropriate or ethical" for an employer to dictate any employee's medical needs or treatment.

The Jets have not commented publicly on the situation, which could soon become a legal matter.

Osemele said the team doctor recommended he could play through the injury with pain-killers and a brace. An independent doctor in California had similar findings, recommending surgery only if the symptoms dictated it. But a person with direct knowledge of the situation told The Associated Press last Friday that both doctors determined it is a pre-existing injury and cleared Osemele to continue playing through it — and hold off on the surgery.

Osemele flew to Boston on Tuesday for a third medical opinion and was examined by orthopedic surgeon Dr. Glen Ross, who informed him that his shoulder injury is "pretty bad" and the labrum is "torn off the bone." The doctor recommended surgery, and Osemele is opting to have it — news he gave an "upset" Douglas on Tuesday night.

On Wednesday night, Osemele posted a photo of his doctor's report from Ross on Instagram. It details Ross' findings, which call for Osemele to have "a right shoulder arthroscopy, labral repair and cyst debridement." The report also shows that Osemele has "a posterior/inferior labral tear and a large cyst."

While speaking to reporters Wednesday, Osemele said he and Gase haven't spoken in "weeks," but had no issue with the coach. Gase said Osemele spends most of his time in the trainer's room while he's running practices.

"That's not a coach's job," Osemele said. "So, there's really no disappointment. ... I feel like that's just a general thing when you're trying to be focused on winning football games and not have to deal with all this other stuff. I'm not sure he makes those types of decisions."