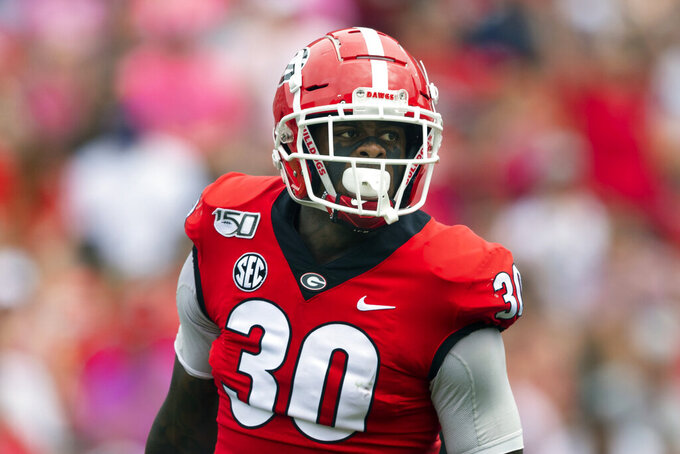 FILE - In this Sept. 14, 2019, file photo, Georgia linebacker Tae Crowder looks over the offensive lineup of Arkansas State during an NCAA football game in Athens, Ga. Crowder is going to have to settle for being Mr. Irrelevant without the frills for now. Still, the Georgia linebacker is just happy being picked by the New York Giants in the NFL draft. (AP Photo/John Amis, File)

Tae Crowder is going to have to settle for being Mr. Irrelevant without the frills for now.

To be honest, the Georgia linebacker is just happy he was picked by the New York Giants in the NFL draft Saturday, even if it was with the 255th and last selection of the three-day event that was held remotely for the first time because of the coronavirus pandemic.

“It was crazy just because I was already planning on signing as a free agent," Crowder said Wednesday in a conference call. “I can’t even explain how it felt. My family was happy. I was happy. That’s all that matters.”

The roots of the Mr. Irrelevant award date to 1976. It was started by former NFL player Paul Salata to honor the last player taken in the draft, someone who symbolized a person trying to overcome long odds.

Melanie Salata Fitch, Salata's daughter, said the organization has always been flexible with arrangements because teams had their June minicamps at different times. The current restrictions related to the virus are another issue to handle.

The planned Mr. Irrelevant week in Newport Beach, California has a parade, a “Lowsman Banquet” that includes a roast, a trip to Disneyland like the MVP of the Super Bowl and a number of other events.

Social distancing will make it harder to plan everything.

“He will be Mr. Irrelevant until the next one is selected,” Salata Fitch said in a telephone interview from California on Wednesday. “We have 12 months to honor him. We can do it in December. There is a lot of support here in Newport and I think people would rally to it once it's safe to get together.”

Crowder spoke with the organization shortly after being drafted and he is looking forward to his day.

“I guess when everything clears up we’ll just have to find a way to plan with them,” he said.

Crowder, who started 14 games for the Bulldogs last season playing all three linebacker positions, spent plenty of time on the final day of the draft talking with his agent, discussing what teams might be good for him. Teams also called saying they were interested.

"You know, it was really stressful," Crowder said. “A lot of teams were kind of saying the same thing. So it came down to, you know, who I thought was the best. But New York was one of the them. They end up pulling the trigger. So, you know, I just thank God for that.”

Being taken in the draft was big news in his hometown of Hamilton, Georgia. There were banners in the town of less than 2,000 and the Harris County High School put up his name in lights: “Congrats. Tae Crowder. NFL Draft 2020.”

“I’m one of the first ones from my town to get drafted, that’s pretty big,” Crowder said. “I’m from a small town. People really don’t make it from here. And this brought the city out.”

Most Mr. Irrelevants don't make an NFL team. If they do, they don't last long. But there are exceptions.

Ryan Succop of South Carolina kicked for 11 seasons in the NFL with Kansas City and Tennessee after being Mr. Irrelevant in 2009. He played in 166 regular-season games and scored 1,046 points

Crowder, who was recruited as a running back and switched to defense, is the type of player new coach Joe Judge wants. He is eager, wants to learn, and is versatile. He can play any of the three linebacker spots, cover backs coming out of the backfield, and play special teams.

The Giants had two other Mr. Irrelevants: running back John Tuggle in 1983 and quarterback Larry Wanke in 1991. Tuggle played for the Giants for a season. He died of cancer in 1986 at the age of 25.

Running back Jim Finn was drafted by the Chicago Bears with the last pick in 1999. He went to the Giants and was on injured reserve when they won the Super Bowl for the 2007 season.