Giants' Barkley on verge of returning from sprained ankle 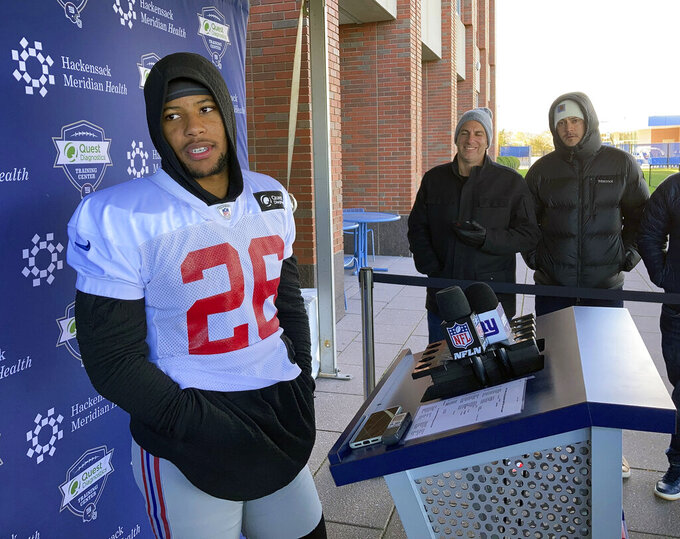 CORRECTS TO DALLAS INJURY ON OCT. 10 NOT OCT. 18 - New York Giants running back Saquon Barkley, left, talks to the media after an NFL football practice Friday, Nov. 19, 2021, at the team's headquarters in East Rutherford, N.J. It was the first time in weeks Barkley has spoken about the ankle he sprained against Dallas on Oct. 10. He has missed the Giants' last four games but hopes to play Monday night in Tampa against the Buccaneers. (AP Photo/Tom Canavan)

EAST RUTHERFORD, N.J. (AP) — When Saquon Barkley stepped on the foot of a Cowboys defensive back while running a pass pattern last month and sprained his ankle, the New York Giants star running back envisioned he would be out only a few weeks.

The MRI after the Oct. 10 game quickly dispelled that idea.

When he appeared ready to return weeks later against the Las Vegas Raiders on Nov. 7, a false positive COVID-19 test again put his return on hold. He missed three days of practice while in the virus protocol.

The Giants' bye week followed, so there went another week.

What's made the wait even tougher is that Barkley missed most of last season after tearing his ACL in a game in Chicago.

“As a competitor, you want to be out there,” Barkley said Friday. “I just went a whole year, missed 14 games because of a knee and having to watch all the games on TV or being there. Then having to miss three or four games, however many games I just missed, obviously it sucks.

"Just missed the game and just hopeful that I get that opportunity this week. Just got to keep trusting it and keep building.”

Barkley has moved well in the periods of practice open to the media this week. He acknowledged being a little sore.

Veteran Devontae Booker has carried the load in the four games Barkley missed. Signed as a free agent in the offseason, he has had a least 120 total yards from scrimmage in each of the last two games.

Coach Joe Judge has not said whether Barkley will play. There also is a question about Booker's status. He banged up a hip against Las Vegas. Both players practiced on a limited basis the past two days.

The 2018 NFL Offensive Rookie of the Year, Barkley drew some laughs talking about staying at home while in the COVID protocol. He had to stay away from his family and spent a lot of time playing Madden video games.

“There’s nothing that’s going to feed it like playing football. It’s not just a competitive side, it’s just the love of the game and just how passionate I am about it,” Barkley said. “Every single day so far this week, just trying to come back and just get better and show the coaches that I’m able to go out there and protect myself and be able to help the team.”

Barkley smiled when asked if he handed the ball to himself on 75 straight plays on Madden. He said he focused on the managerial side, making his team bad and then getting rid of his top players and rebuilding the team.

“I don’t play with Giants because it’s too close to home,” he said. “Say if I’m playing a game and if I fumble the ball, I’ve got to take myself out of the game. It’s too weird for me, so I stay away from the Giants.”

Now in his fourth season, Barkley understands the injuries may have a financial impact when it comes to getting a new contract. He had 54 carries for 195 yards and two touchdowns in four-plus games. He also had 14 catches for 130 yards and a TD.

“All the things I want to obtain are still out there for me to obtain,” he said. “That’s how I’ve got to live by it. There are going to be setbacks. There’s going to be adversity – not just as a football player, but in anything you do in life. Just because you have a little adversity, little setbacks, doesn’t mean you’ve got to start listening to all the noise.

"You’ve got to ignore the noise, put your head down and keep working.”