Giants in corner after Vikings burst bubble and Pats up next 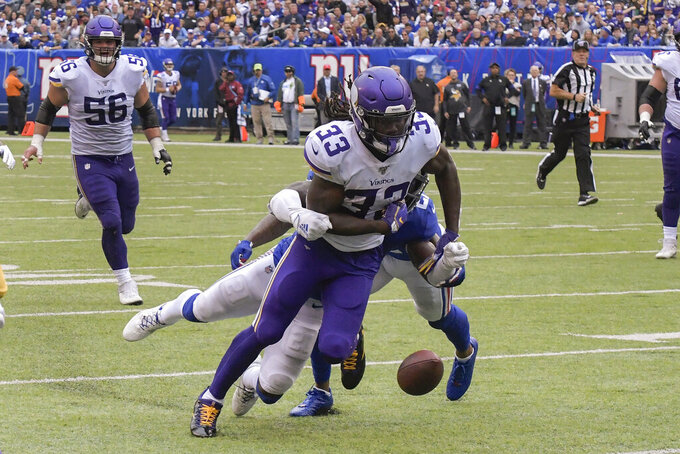 Minnesota Vikings running back Dalvin Cook is stripped of the ball for a fumble by New York Giants free safety Jabrill Peppers (21) during the second quarter of an NFL football game, Sunday, Oct. 6, 2019, in East Rutherford, N.J. (AP Photo/Bill Kostroun)

EAST RUTHERFORD, N.J. (AP) — The hope rookie sensation Daniel Jones generated for a turnaround season for the New York Giants with wins in his first two starts at quarterback is fading.

The Giants (2-3) were outclassed by the Minnesota Vikings in a 28-10 loss Sunday, and there were few positives.

The Vikings (3-2) outgained the Giants 490-211, including 211-64 on the ground. Jones was punished by Minnesota's talented front four on almost every pass attempt and running back Wayne Gallman, who was replacing the injured Saquon Barkley, had to leave early with a concussion. The defense did little right.

If that isn't bad enough, this is a short week. Pat Shurmur's group is back on the field Thursday to play Tom Brady and the undefeated Super Bowl champion New England Patriots (5-0).

It's hard to imagine New York winning the game. A loss would drop it to 2-4. That would leave 10 regular-season games to play, including six with teams who currently have a winning record.

There are two games with the Philadelphia Eagles (3-2), who are tied with Dallas for first place in the NFC East.

The prospects for the playoffs would be slim, especially since the Giants have not beaten a team with a winning record — Tampa Bay (2-3) and Washington (0-5) this season were their victims. It would be a seventh time in eight years without a playoff berth.

If there is a positive, it's Jones. The sixth pick overall in the draft is the real thing. He has replaced Eli Manning and transformed the offense with his throwing and ability to extend plays with his legs. He also makes rookie mistakes. Two came Sunday, missing receiver Sterling Shepard on throws that might have been touchdowns.

Make those plays, and Sunday might have been different. It wasn't though and the 2019 season, which started off 0-2 under Manning, is again in trouble with Jones running the show.

Special teams. Rookie Corey Ballentine had a 52-yard kickoff returned to set up the Giants' touchdown. Riley Dixon averaged 44.7 on three punts, with one rolling dead at the Vikings 2. The Vikings scored a TD on the ensuing series. Aldrick Rosas hit his only field goal attempt.

The revamped offensive line allowed Jones to be hit or sacked on 12 of 38 pass attempts, and the running game netted 64 yards on 20 carries, or 3.2 yards. The longest run was 11 yards. That might have been the play on which Gallman was hurt. The 211 total yards were the team's lowest since 170 yards against Washington on Nov. 23, 2017.

Wide receiver Darius Slayton. The fifth-round draft pick caught four passes for 62 yards, including a diving catch on a 35-yard touchdown pass from Jones. He showed an ability to get open — he was targeted five times — and go deep.

Nate Solder. The team's highest paid lineman was called for two holding penalties and appeared to give up two sacks and at least that many pressures. Through five games, the left tackle has allowed roughly 20 pressures and five sacks.

Gallman left the game with a concussion in the first quarter and Shepard is back in concussion protocol. Their chances of playing Thursday aren't good. Rookie Jon Hilliman and Eli Penny as the only healthy backs. Barkley might return from his high ankle sprain, but that might be pushing it for such a valuable piece of the offense. Linebackers Alec Ogletree (hamstring), Lorenzo Carter (neck) and Tae Davis (concussion) were inactive and might return.

490s — The defense has given up more than 490 yards in three of five games, with Dallas getting 494, Tampa Bay 499 and Minnesota 490. Buffalo had 388 yards in beating the Giants. That's got to drop if New York is going to be competitive.

The defense has to stop blowing coverages and missing tackles. The Vikings had 10 plays of 19 yards or more, including two of more than 40. That totaled 259 yards, or an average of 25.9 yards. The other 54 plays netted 231 yards, 4.2 yards per, still not good. The offense needs to re-establish the running game. It might be hard with the injuries.