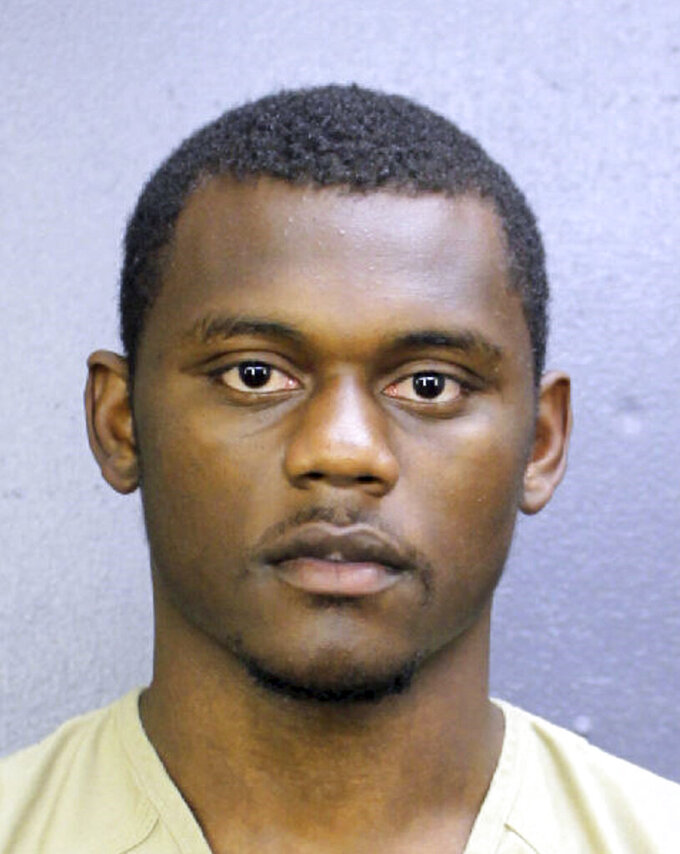 This booking photo provided by the Broward County, Fla., Sheriff's Office shows DeAndre Baker. The New York Giants cornerback surrendered to police Saturday, May 16, 2020, after being charged with robbing people of money and valuables at a cookout he was attending with another NFL football player. Baker is charged with four counts of armed robbery with a firearm and four counts of aggravated assault with a firearm. He turned himself in at the Broward County Jail. (Broward County Sheriff's Office via AP)

FORT LAUDERDALE, Fla. (AP) — New York Giants cornerback DeAndre Baker surrendered to police Saturday after being charged with robbing people of money and valuables at a cookout he was attending with another NFL player.

His lawyer, Bradford Cohen, says he has affidavits that will clear Baker.

Baker and Seattle Seahawks cornerback Quinton Dunbar were sought by police since Thursday, when arrest warrants were issued. Dunbar’s lawyer, Michael Greico, also says he has such affidavits.

Cohen posted on Instagram: “We believe our client is innocent of all charges. We urge people not to rush to judgment. We have affidavits from several witnesses that exonerate my client.”

Dunbar had not surrendered to police as of Saturday afternoon. On Friday, Greico said that “law enforcement and the state attorney’s office are both now aware that my client is innocent.”

Police in Miramar, Florida, issued arrest warrants for both men after multiple witnesses accused them of an armed robbery at a party.

Baker, 22, and Dunbar, 27, were attending a cookout at a Miramar home Wednesday night when a fight broke out, and Baker pulled out a handgun, the warrant said. Baker, Dunbar and two other men began robbing other people at the party of thousands of dollars in cash, watches and other valuables, witnesses told investigators.