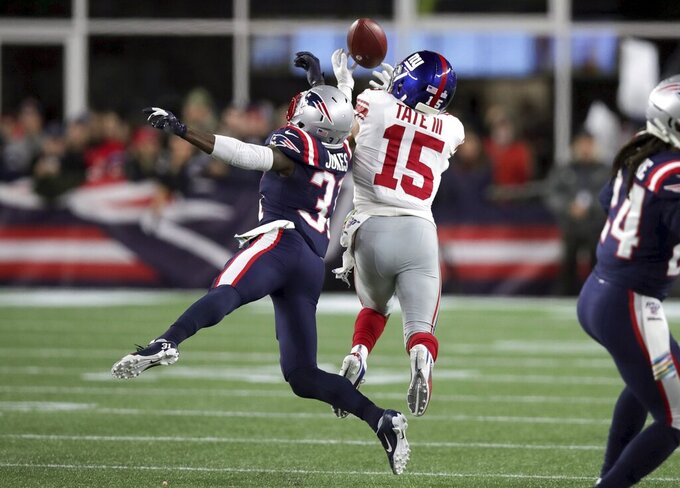 EAST RUTHERFORD, N.J. (AP) — The anemic and injury-plagued New York Giants' offense expects to get a little help when it plays the Arizona Cardinals this weekend in a game matching the first two quarterbacks taken in this year's NFL draft.

Giants tight end Evan Engram was optimistic Monday about playing Sunday at MetLife Stadium, and there is a chance 2018 NFL Offensive Rookie of Year Saquon Barkley also will be back.

Engram, who is having a breakout season, missed Thursday night's 35-14 loss to the New England Patriots with a knee injury. Barkley has missed the last three games with a high ankle sprain suffered against the Tampa Bay Buccaneers on Sept. 15.

The status of top receiver Sterling Shepard is uncertain. He missed the Patriots' game with his second concussion this season. He took part in individual drills Monday, but coach Pat Shurmur refused to talk about his status.

"It's unfortunate," Engram said of the team not having three major cogs in the offense. "We've talked about it. We can't dwell on it. We have to keep moving."

One sign that Shepard may be out a little longer was New York signing veteran receiver Bennie Fowler, who was cut before the game against the Minnesota Vikings. Shepard was hurt in that contest.

The Giants (2-4) have done very little offensively in the last two games, being limited to 211 total yards in a 28-10 loss to the Vikings and 213 against the Patriots.

Engram, who had a team-high 33 catches for 373 yards and two TDs, and Barkley watched Thursday night's game at Shepard's home.

"It's tough, definitely opportunities in that game," Engram said. "It (hurt) not being out there, but like I said, there are things out of our control. When they do happen we can't really dwell and pout and not gain anything from it. We just have to do what we can and be ready."

In the last two games, Daniel Jones and the offense accounted for one touchdown in each game. A big kickoff return by rookie Corey Ballentine set up the TD against the Vikings and the one against the Patriots was on a 64-yard pass to Golden Tate III.

The good news for the Giants is that while they have lost their last two games, Dallas and Philadelphia (both 3-3) lost over the weekend. New York is a game out of first place in the NFC East heading into the matchup with Kyler Murray and the Cardinals (2-3-1).

Murray was the No. 1 overall pick in the draft. Jones was taken No. 6.

"I have seen some crazy things happen in this league," veteran safety Antoine Bethea said. "Two-and-four is not where we wanted to be. We just have to focus on Arizona. That's our biggest test right now. We get this one, get to 3-4, and then it's one game at a time."

NOTES: The Giants are not accepting mistakes. Rookie RB Jon Hilliman, whose fumble led to Kyle Van Noy's game-breaking 22-yard fumble return in the fourth quarter against New England, was waived Friday, when RB Buck Allen was signed. Linebacker Nate Stupar, whose man pushed him back so close to Riley Dixon that the punter's kick deflected off him and was returned for a touchdown Thursday, was waived Monday. Fowler was signed to replace him. ... Second-year CB Sam Beal, who has been on injured reserve since the start of the season, may start practicing Wednesday.