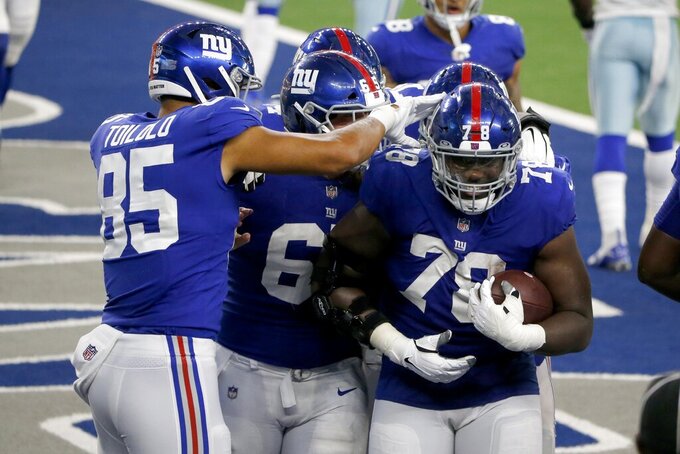 FILE - In this Sunday, Oct. 11, 2020, file photo, New York Giants tight end Levine Toilolo (85) and Nick Gates (65) celebrate with Andrew Thomas (78) who caught a pass for a two-point conversion in the second half of an NFL football game against the Dallas Cowboys in Arlington, Texas. Thomas has been the focus of the team's youth movement since being taken with the fourth pick overall in the draft, but almost all of the Giants draft picks have worked their way into the lineup at the halfway point of the season. (AP Photo/Michael Ainsworth, File)

EAST RUTHERFORD, N.J. (AP) — The New York Giants' youth movement is expanding in all phases of the game.

First-round draft pick Andrew Thomas has been the focal point of the movement since being taken with the fourth pick overall in the draft.

However, almost all of the Giants draft picks have worked their way into the lineup in some form at the halfway point of the season.

The lone exceptions are safety Xavier McKinney, who broke a foot in training camp and remains on injured reverse, and seventh-round pick Chris Williamson, a cornerback on the practice squad.

Seven of the other nine draft picks have made their presence felt as the Giants (1-7) prepare for Sunday's game against the Washington Football Team (2-5).

The most recent contributor of notice was seventh-round selection Carter Coughlin, who got his first career sack with a takedown of Tom Brady in the 25-23 loss to the Buccaneers on Monday night.

“It’s really cool to see the way that our team has really brought along the rookies,” Coughlin said Thursday. “I know that’s not the place everywhere, but I know at least in the outside/inside linebacker room, all of the veteran guys have been incredibly helpful for me, for Cam (Brown), for the rest of the linebackers, and I know that’s throughout the team.”

A former star at national powerhouse Georgia, Thomas was thrust into the starting lineup at left tackle after veteran Nate Solder opted out of the season because of concerns about the coronavirus pandemic.

Thomas has had his good moments and his struggles, particularly in pass protection. He has allowed more pressure than either the Giants or quarterback Daniel Jones would like.

However, he played one of his better games Monday against the Bucs, one of the NFL's top defensive teams.

What also made that game interesting was the Giants used a line that had three rookies at times, with third-round pick Matt Peart playing right tackle and fifth-round pick Shane Lemieux starting at left guard for Will Hernandez, who tested positive for COVID-19.

“Still a lot of work to do,” Thomas said of his performance this season, which included a reception on a 2-point conversion pass against Dallas. “I think I’m making progress every week. Small steps every day, but I’m continuing to work on getting better.”

Thomas, who did not start the previous game against Washington after showing up late for a meeting the previous night, said his biggest problems are not using his hands properly and messing up his footwork.

“It’s hard to play in the National Football League as a rookie,” offensive coordinator Jason Garrett said. “It’s particularly hard to play left tackle in this league, and particularly hard to go against some of the rushers he’s gone against over the first half of the season. Throughout the season, he’s done some good things. Obviously, there are plenty of areas where he needs to get better. But we all need to get better.”

Coughlin has gotten a chance to rush against Thomas and face Lemieux. He called Thomas “a stud” and said Lemieux will thump you.

Here's a rundown on the rest of the draft picks.

Peart started against Washington, alternating quarters with Thomas. He got more time on the right side last week.

Cornerback and fourth-round pick Darnay Holmes has been part of the sub package in passing situations. He has started two games, has 16 tackles, a fumble recovery and a quarterback hit.

Lemieux got his first start against the Buccaneers and did OK, bringing a nastiness to the offensive line.

Four of the five players taken in the sixth and seventh rounds are contributing. Linebacker and sixth-round pick Cam Brown did well on special teams and is getting more time in recent weeks on passing situations with the trade of Markus Golden and the season-ending injury to linebacker Lorenzo Carter.

The same holds true with Coughlin. Linebacker and seventh-rounder TJ Brunson has been getting his chance on special teams recently.

The biggest surprise may have been linebacker Tae Crowder, the last player taken in the draft and the current “Mr. Irrelevant.” He got two starts, had 18 tackles overall and scored on a fumble return against Washington last month to give the Giants their winning margin against Washington in the team's only W. He hurt his hamstring on the play and is on IR, waiting to get back.