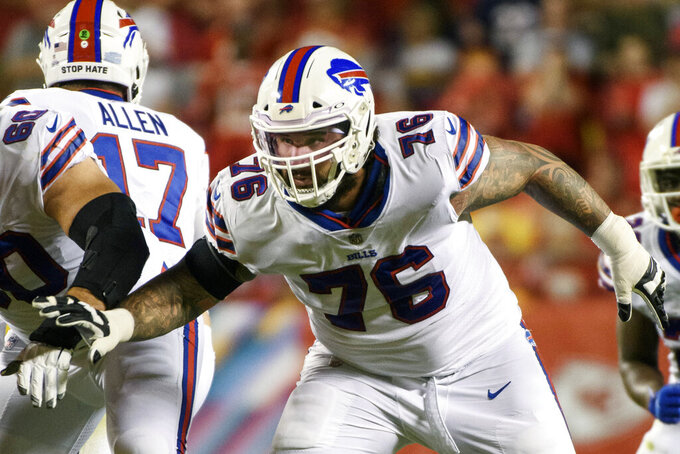 FILE -Buffalo Bills guard Jon Feliciano (76) blocks during the first quarter of an NFL football game against the Kansas City Chiefs, Sunday, Oct. 10, 2021 in Kansas City, Mo. Dehydration is one of the biggest concerns during football camps in the summer, and New York Giants saw its effects close up on new center Jon Feliciano. (AP Photo/Reed Hoffmann, File)

EAST RUTHERFORD, N.J. (AP) — Dehydration is one of the biggest concerns during football camps in the summer, and the New York Giants saw its effects on new center Jon Feliciano.

On the second day of practice, Feliciano developed severe dehydration after a practice without pads. The 30-year-old had experienced it before while playing at the University of Miami, so he knew what was happening.

Feliciano jumped into a cold tub and planned to get an IV immediately.

“I’m kind of a hard stick sometimes and then, (they) missed me a few times,” Feliciano said Sunday in discussing the July 28 incident with reporters for the first time. “And then after that, I started profusely sweating. And then, I just started full body cramping. Good times.”

“Imagine your muscles just — especially my legs mostly cramped up just like that (a fist) for a while,” Feliciano admitted, adding he did a lot of screaming.

While not hospitalized, Feliciano was dehydrated over the next four days and not back at practice until Aug. 3, and that was on a limited basis. He complained every day and was not happy when he was limited to 20 plays on Friday when the team practiced in front of fans in MetLife Stadium.

Feliciano is considered a major piece of the new offensive line. The former Buffalo Bill veteran was signed as a free agent in the offseason and the team is counting on him to replace Nick Gates at center.

Gates sustained a gruesome break of his left leg in the second game of last season and it's still unknown when he will be able to play again, if ever.

Feliciano took on a full load of work Sunday on a line that is showing the potential to be good this season. It's been poor over the past three seasons.

Most of the faces are new with the exception of left tackle Andrew Thomas, the fourth pick overall in 2020, and left guard Shane Lemieux, who missed all but one game last season with a knee injury.

Evan Neal, the No. 7 pick in this year's draft, is the right tackle and plays next to guard Mark Glowinski, another free agent signing.

“I think we can be really good,” Feliciano said. “It’s all about getting our reps together and getting our verbiage the same.”

The biggest difference in camp compared to last season is that Saquon Barkley is healthy (ACL tear in 2020) and running well. Coach Brian Daboll also is allowing his defenders to occasionally take the 2018 NFL Offensive Rookie of the Year to the ground. It happened during the inside run session Sunday.

“We are all out there having fun for probably the first period and then we started realizing what kind of day it was going to be and, at least for me, practice got easier the longer we went,” Feliciano said. “Just because run plays for a lineman, we like putting our bodies on people.”

The line lost rookie tackle Marcus McKethan last week. The fifth-round draft pick from North Carolina tore an ACL in a non-contract drill on Friday and was placed on injured reserve.

“He’s down now,” Ezeudu said. “So now for him, all I have to do is just to come out here every single day and work for him and me, too.”

NOTES: Daboll said everyone who is healthy will play in Thursday's preseason opener on the road against the New England Patriots. ... Assistant defensive line coach Bryan Cox has been working with the unit with line coach Andre Patterson sidelined with an undisclosed medical issue. Daboll thinks Patterson will be back sooner rather than later. ... One of the funnier moments at practice was defensive lineman Leonard Williams responding to a fan who offered him a glazed doughnut for an autograph. Williams walked to the fence, signed a football and ate the doughnut.