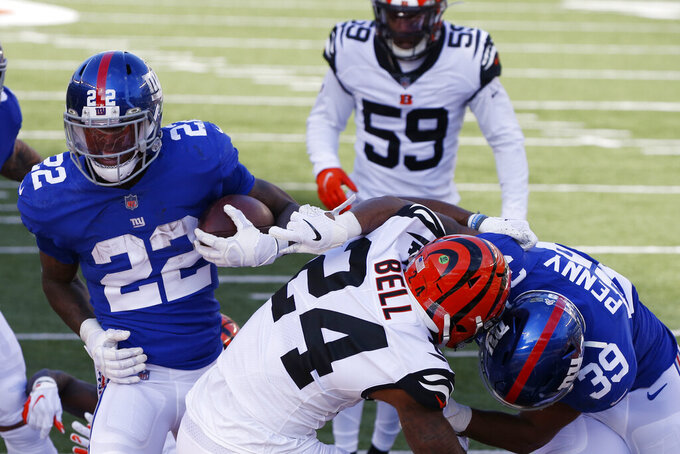 New York Giants running back Wayne Gallman (22) rushes for a 1-yard touchdown during the first half of NFL football game against the Cincinnati Bengals, Sunday, Nov. 29, 2020, in Cincinnati. (AP Photo/Gary Landers)

It’s the last week before most fantasy playoffs, so it’s as important as ever that we’re getting the most from key players. These are my best bets to find the end zone in Week 13.

Montgomery has only one rushing touchdown this season, but he’s coming off his best game of the season against the Packers in Week 12, and this week he faces another NFC North team in the Lions that also happens to be the best matchup for RBs in the league. Detroit has allowed 21 TDs to RBs this season, five more than the next closest team, the Packers. With Mitch Trubisky under center, expect the Bears to lean heavily on Montgomery, who could have another big fantasy outing.

Gallman has evolved into a scoring machine as of late, finding the end zone six times in the past five games. Devonta Freeman is eligible to return from IR this week, but the 44.94% TD dependent Gallman is running better than Freeman was when he was healthy, and with quarterback Daniel Jones possibly out with a hamstring injury, the Giants will rely on their run game. It’s no coincidence that Gallman received his highest carry total (24) in the same game that Jones went out. He’ll face a Seattle team that is middle of the pack against the run.

Taylor missed the Colts’ previous game because of being placed on the COVID-19 list, but he came back negative and should be good to go against the Texans this week. It’s a somewhat crowded backfield in Indianapolis, but Taylor had 26 touches and 114 yards in the game before he was listed, so he should step back into his previous role. His opponent, the Texans, are the second-best matchup for RBs, allowing 15 TDs to RBs in addition to a league-leading 1,564 yards.

Cook has only scored once in the past three games, but he’s still the league leader in rushing TDs (13) and has a 37.75% TD dependency despite having more than 215 attempts this season. Cook gets to face the Jaguars this week, a team that has given up 12 TDs to RBs this season and is the sixth-best matchup.

Henry has been on a roll the past two weeks with more than 300 yards and four TDs in that span. The Titans play Cleveland this week, and though they’re stout against the run, Henry has just proven that he’s matchup proof by running for 178 yards and three TDs against the Colts, a team that was touted as having the best defense up to that point. The 34.78% TD dependent Henry will continue to feast and could find the end zone in Week 13.

Metcalf has been slowed a bit in two of his past three games, but he’s still finding the end zone more than most, as he’s fifth in the league for WR scores (nine). He’ll come into Week 13 fresh off his highest yard total of the season (177 yards) in Week 12 to face a Giants team that has allowed 10 TDs to WRs this season. The Giants’ secondary is respectable, but Metcalf’s size/speed combo makes him difficult to stop.

Allen has scored in five consecutive games as Justin Herbert’s main red zone target. The fact that he has a 32.94% TD dependency, despite leading the league in targets (122) and receptions (85) is impressive. He’ll go up against a Patriots secondary that is good in stifling yardage, but has given up 14 TDs to WRs this season, tying them for fourth most in the league.

Thielen had to sit out Week 12 on the COVID-19 list, but he should return this week in time to find the end zone against the Jaguars. Even with missing last week’s game, Thielen is tied for second in the league with 11 TDs, for a 49.22% TD dependency. The Jaguars have allowed 12 TDs to WRs this season.

Parker has benefited from Ryan Fitzpatrick taking over the QB position for Miami last week, putting up a season-high 118 yards on eight receptions. The only thing missing was a score, and he has a great opportunity to make up for it this week against the Bengals.

Scoring two TDs in the past four games and getting double-digit targets in the past two, Woods is heating up down the stretch, and he’s got a matchup with the Cardinals in Week 13. Arizona has allowed the fifth-most TDs (13) to WRs this season, and the 35.18% TD dependent Woods should be no exception.