Giants get future QB and start rebuilding defense in draft 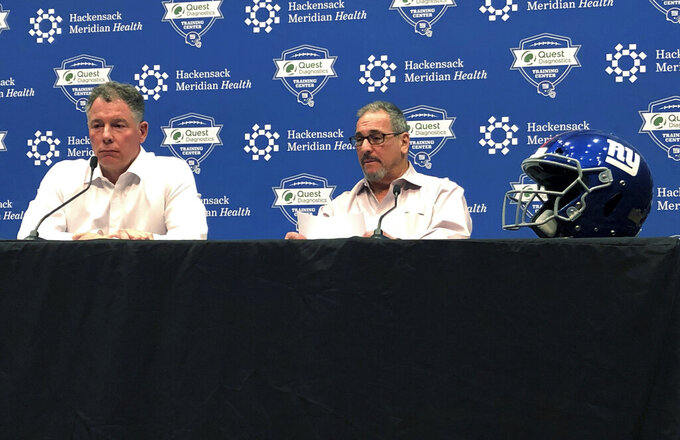 EAST RUTHERFORD, N.J. (AP) — After making three picks on the opening day of the NFL draft, New York Giants general manager Dave Gettleman was quick to say how great it is when need and value match.

It ended up being the story of all three days of the draft for the Giants, who are in a serious rebuilding mode after winning eight games over the past two seasons.

Much had to be replaced with the trades of star receiver Odell Beckham Jr and top sacker Olivier Vernon to Cleveland, the loss of Pro Bowl safety Landon Collins to Washington in free agency, and a roster that had holes and a lack of depth.

Gettleman got top-quality players with three first-round picks, but he also put his job on the line taking Duke quarterback Daniel Jones with the No. 6 pick overall.

The Giants aren't going to shove Jones into the starting lineup. He is going to learn for a year or so behind two-time Super Bowl MVP Eli Manning, who is 38 years old and entering the final year of an $84 million contract.

However, that's a big sacrifice. The Giants need a quarterback for the future. Their fans also want them to win now, especially after missing the playoffs six of the past seven seasons and finishing 5-11 last season.

The problem is there is no guarantee Jones is going to be a sure thing. He was rated by some as the fourth-best quarterback prospect in the draft. Gettleman and coach Pat Shurmur believe he can be a franchise player.

"That's the box I am in. Coaches have to win now and I ask myself a million times, 'Have I given Pat and the guys enough players to win?' It's tough."

Gettleman said he knew two teams would have taken Jones had he not done so at No. 6, adding it was not easy to pass on Kentucky edge player Josh Allen, who was taken at No. 7 by Jacksonville.

"But I think that much of Daniel Jones and his future as an NFL quarterback," he added.

Time will tell, but there is a lot riding on it for the 68-year-old Gettleman, who just finished his second draft since replacing Jerry Reese.

Here's the quick takeaway from the draft:

In addition to Jones, the Giants drafted seven players on defense, a speedy wide receiver and an offensive tackle.

The defense needed the most help after finishing 24th in the league and registering 30 sacks, tied for second lowest in the league in 2018.

The D line and the secondary got the most help.

Defensive tackle Dexter Lawrence of Clemson was the 17th pick overall. He is a run stuffer at 344 pounds who can get a push in the middle to help the rush.

Cornerback Deandre Baker of Georgia was the third of New York's three first-round picks, No. 30 overall. The Giants feel he was the top cover cornerback in the draft.

Defensive end Oshane Ximines was taken in the third round. He is the first player drafted out of Old Dominion, where he had 33 sacks.

Notre Dame cornerback Julian Love was taken in the fourth round. He is fast and can play both the slot and the outside in coverage.

Wisconsin inside linebacker Ryan Connelly was the first of two fifth-round picks. He is a fast sideline-to-sideline player who had 89 tackles before his season was ended by hernia surgery. Auburn wide receiver Darius Slayton is a sprinter who averaged 20.3 yards per catch in his career.

The Giants wrapped up the draft by picking Kentucky tackle George Asafo-adjei and Syracuse defensive tackle Chris Slayton in the seventh round.

Asafo-adjei was the feel-good story. He was born in New York City and raised by a single mother who worked three jobs. He didn't get a chance to meet his sister until he was 14 years old because she was living in Ghana and the family could not get her to the United States.

Picking Jones at No. 6. It's going to be debated for some time.

The Giants met every major need, except drafting a young safety.

Right tackle is the big issue. Asafo-adjei will be given a chance to challenge incumbent Chad Wheeler. There is a chance veteran free agent right tackle Mike Remmers will be signed. He visited during free agency and is currently rehabbing an injury.