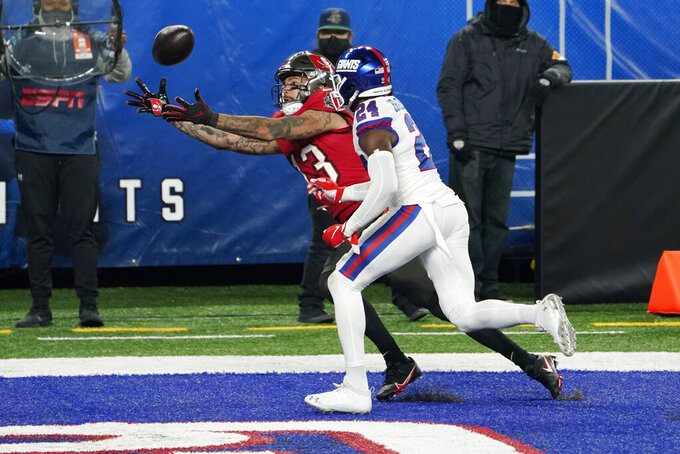 Tampa Bay Buccaneers' Mike Evans, left, catches a ball in the end zone for a touchdown in front of New York Giants' James Bradberry during the second half of an NFL football game, Monday, Nov. 2, 2020, in East Rutherford, N.J. (AP Photo/Corey Sipkin)

EAST RUTHERFORD, N.J. (AP) — The New York Giants had another close call and came up on the losing end again.

The blame for this one clearly can be directed at second-year quarterback Daniel Jones for throwing two second-half interceptions that led to 10 Tampa Bay points in a 25-23 loss to the Buccaneers on Monday night. The flags also didn't fall right for coach Joe Judge's team.

After scoring a last-minute touchdown, the Giants (1-7) saw the officials pick up a flag for pass interference on a 2-point conversion attempt that took away a potential shot to tie the game.

Jones was also stunned by the decision.

“You don't see that often,” said Jones, who finished 25 of 41 for 256 yards and two touchdowns. “I was certainly surprised.”

What's not surprising is seeing Jones make mistakes. He has thrown nine interceptions this season after racking up 12 in his rookie year. Both picks against the Bucs came when he was under pressure and both were ill-advised throws, something the coaching staff has repeatedly talked to him about.

“I think the message is to understand when it is not there and the ball is in my hand, I have to prevent the big mistake,” Jones said. “The communication is clear. The coaching is clear. I have to do a better job of applying it.”

After being questioned several times about Jones' play, Judge backed his quarterback.

“Daniel is our quarterback,” Judge said. "What we have to do is continue improving everything around him, and we coach every player the same way. I told Daniel both times the play happened tonight to be patient with it, stay committed to it, we are going to need you down the stretch."

Jones was outstanding leading a late 13-play, 70-yard drive that he capped with a 19-yard TD pass to Golden Tate. Jones had Dion Lewis open on the 2-point try but Antoine Winfield Jr. arrived at the same time as the pass, which was a little behind Lewis.

“The communication between the side judge and the down judge was that the defender contacted the receiver simultaneously as the ball came in,” refereee Brad Rogers said to a pool reporter in explaining why the flag was picked up. “And in order to have defensive pass interference, it has to be clearly early and hinder the receiver’s ability to make the catch.”

The Giants have now lost five times this season with the game on the line in the closing seconds.

“We are turning in the right direction," safety Jabrill Peppers said. “I truly believe that.”