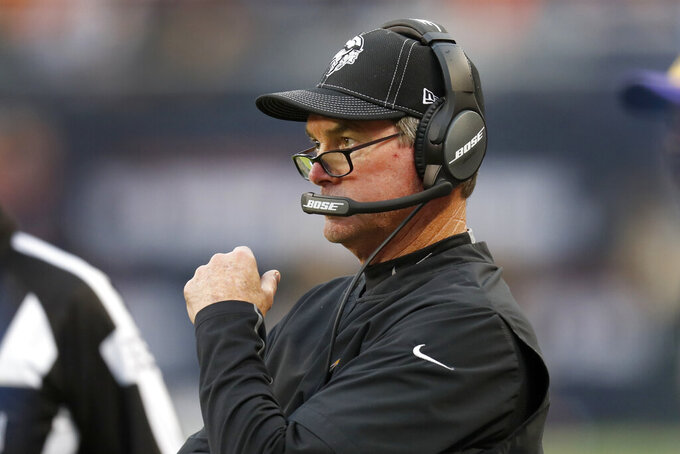 Minnesota Vikings head coach Mike Zimmer watches from the sidelines during the second half of an NFL football game against the Chicago Bears Sunday, Sept. 29, 2019, in Chicago. (AP Photo/Charles Rex Arbogast)

EAST RUTHERFORD, N.J. (AP) — On the surface, the Minnesota Vikings’ game against the New York Giants is a meeting of old friends.

It’s the first time Vikings coach Mike Zimmer is going to face his former offensive coordinator since Pat Shurmur left to become the head coach of the Giants in 2018.

There’s a lot at stake for both men, and their teams.

The Vikings (2-2) are coming off a disappointing 16-6 loss to the NFC rival Chicago Bears in a game when their offense did little.

The Giants (2-2) are riding a high since Shurmur benched Eli Manning and made rookie Daniel Jones the starting quarterback a little more than two weeks ago. They are looking for their first three-game winning streak since 2016, and this would be a win over a team with an outstanding defense.

“They are a good unit, a good team,” Jones said the Vikings’ defense. “We’ll be prepared. I think when you look at them they are a strong front seven and they are good in the back end, too. I think we’ll be ready.”

The No. 6 overall pick in the draft, Jones has given the Giants a new look with his ability to avoid the rush, extend plays and run when necessary. Since his taking over, New York is averaging 28 points and it has converted on 14 of 26 third-down chances. It had 31 points combined in the first two games and was 5 of 23 on third downs.

“He’s got two wins,” Vikings safety Harrison Smith said. “Kind of the escapability aspect to him, especially in that Tampa game. He’s got a big arm. He’s obviously a young guy, but he’s done some really good stuff for them.”

Jones will need to do more to beat the Vikings.

Five things to watch as the Vikings try to snap a five-game losing streak in outdoor stadiums:

The new scheme directed by offensive coordinator Kevin Stefanski, whom Shurmur tried to bring with him to the Giants but was blocked by Zimmer, has helped the Vikings re-establish themselves as a productive running team. Dalvin Cook is 1 yard off the league rushing lead and the team has an NFL-high eight rushing touchdowns. The success hasn’t opened the passing game for Kirk Cousins. His 88.6 passer rating is 23rd in the league, while his 7.4-yard average per throw ranks 16th.

Golden Tate III has returned to the Giants after serving a four-game suspension for PED use. The 10-year veteran, who signed in the offseason as a free agent, was expected to be the other half of a 1-2 punch at wide receiver with Sterling Shepard. Jones will have to find a way to integrate him into the offense. Tight end Evan Engram (27 catches for 331 yards and two TDs) and Shepard (20 catches for 218 and a TD) have carried the load.

The Giants come into the game ranked 19th against the run, and they are thin at inside linebacker. Rookie starter Ryan Connelly was lost for the season last week with a knee injury. Veteran Alec Ogletree missed last week with a hamstring injury, while fellow inside linebacker Tae Davis sat out with a concussion. David Mayo stepped in for Ogletree against Washington and had a career-high eight tackles. Minnesota is averaging 155.3 yards rushing, so expect the Vikings to exploit the Giants’ lack of depth behind their three-man front.

THE BALL IS LOOSE

Cousins leads the NFL with 46 fumbles since the beginning of the 2015 season, when he became a full-time starter. His six fumbles in the first four games are the most in the league. He had two last week at Chicago, losing one when Khalil Mack sacked him on the first play of the third quarter to set up a Bears field goal. Cousins has been struggling to find the right rhythm in terms of higher-risk, higher-reward decisions and playing it safe when the situation dictates it.

The Giants have neither forced nor recovered a fumble in four games.

The veteran Giants cornerback has been inconsistent. Jenkins was torched by Mike Evans two weeks ago, when the Bucs receiver had eight catches for 190 yards and three touchdowns. Last week, he won NFC defensive player of the week honors for getting two of the Giants’ four interceptions against Washington, and tipping a ball that Connelly intercepted on the opening drive.