Giants may not have to worry about Eli getting hurt anymore 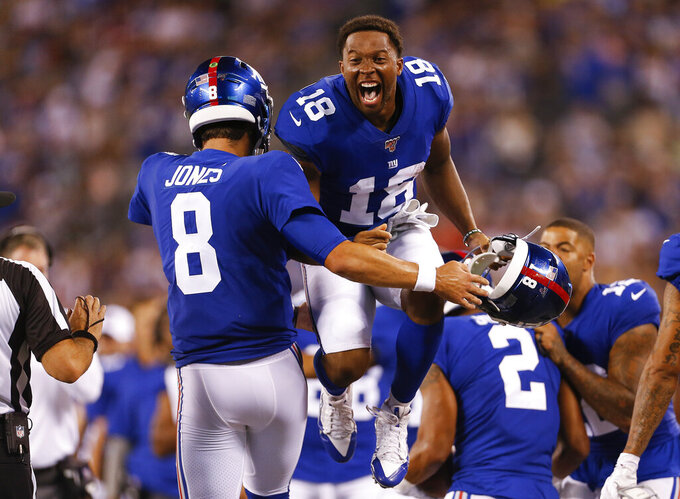 EAST RUTHERFORD, N.J. (AP) — For the first time in about a decade, the New York Giants seemingly don't have to worry about Eli Manning getting hurt.

In just two preseason games, first-round draft pick and heir apparent Daniel Jones has shown he can play in the NFL.

No one ever would have felt the same about former backups Geno Smith, Alex Tanney, Davis Webb, Josh Johnson, Ryan Nassib or Kyle Lauletta in recent years.

Jones has changed that feeling by his play.

When he takes over remains to be seen.

Giants co-owner John Mara said recently he would love to see Manning remain the starter all season and for Jones not to play. Coach Pat Shurmur seconded that approach after New York won its second straight game.

So far, there is no need to make the move. Manning has looked good playing just two series. He had a three-and-out against the Jets and hit all four of his passes in engineering a first-drive touchdown against the Bears. He is 5 of 5 for 42 yards and a TD. His quarterback rating is 143.8.

Shurmur has said Jones is getting ready to play. On Saturday, in discussing the Giants' 32-13 win over Chicago on Friday night, the coach refused to say if Jones was ready.

"I think when his time comes, he's going to be ready," Shurmur said. "I still think we've got training camp left to push through, we've got preseason games left to push through. I would say right now, we're three weeks from any of us being ready, so that's sort of where we're at. We've got work to do, and so that's how I approach that. That would be my answer to that question, I guess."

Jones wasn't perfect against the Bears. He lost two fumbles. The first came when he and center Jon Halapio failed to get together on a snap in the red zone. The second came after he was sacked, the result on not keeping two hands on the ball.

After watching video of the game, Shurmur felt the Giants were a little loose with the ball overall. TJ Jones, who caught a touchdown pass from Daniel Jones on Friday, muffed a punt. Linebacker Nate Stupar dropped an interception, and the Giants' receivers dropped three other passers. Running back Rod Smith also had a fumble.

"Those are all correctable, every one of those, and those are the things that we will continue to focus on as we go through camp," Shurmur said.

If there is a concern for Shurmur, it has to be the defense. The first unit gave up a touchdown to Sam Darnold and the Jets on the opening drive in the first game, and backup Chase Daniel led Chicago's second offensive unit to a field goal on the opening series.

The Bears did not play their starters.

Shurmur downplayed the fast starts, noting the defense limited the Bears to one touchdown and two field goals and had eight 3-out-series.

"There were many things that were good," Shurmur said. "Certainly, you don't want anybody to score on the first drive, but I think there was an improvement this game, we forced them to kick a field goal, so I don't see a trend there. Like everything, though, we're fighting to get better in all areas throughout the game."

At least Jones seems to be ready.