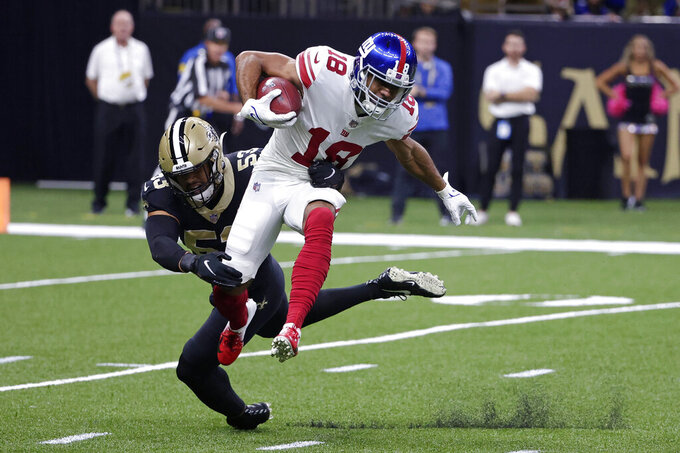 The Giants made the moves on Tuesday after both were hurt on Sunday in a loss to the Los Angeles Rams.

Thomas, the fourth pick overall in 2020, has foot and ankle problems. He missed a game against Dallas the previous week because of a foot injury and sprained an ankle in the 38-11 loss Sunday.

Board broke his arm on a kickoff return.

Thomas must sit out at least three games before becoming eligible to return to the roster. The earliest he can return is the Nov. 22 Monday night game at Tampa Bay.

The roster vacancies were filled with the signing of offensive tackle Korey Cunningham and wide receiver Dante Pettis off the practice squad. They were promoted from the practice squad for the game last weekend.

McKinney has played 80 regular-season games with 77 starts and started all six postseason games in which he played for the Houston Texans from 2015-20. He has 11 1/2 sacks in the regular season.

McKinney, 28, played four games in 2020 before a shoulder injury forced him to go on injured reserve. He was traded on March 17 to the Miami Dolphins and released on Aug. 31.

Kelly had limited action with the New Orleans Saints in 2020. Toivonen was signed as an undrafted rookie out of North Dakota by the Seattle Seahawks on June 8 and released on Aug. 31.