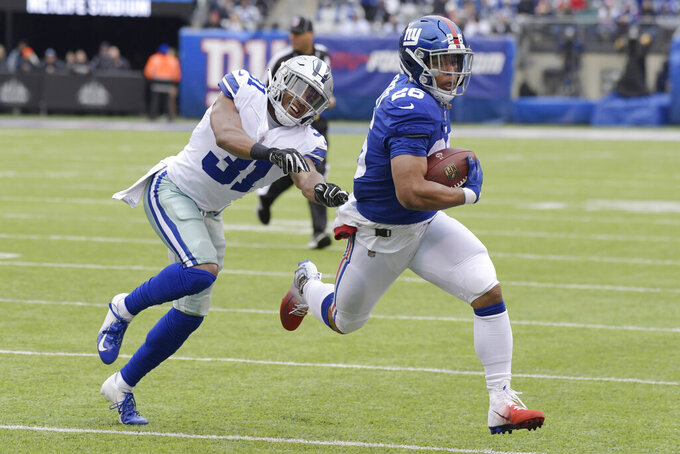 FILE - In this Dec. 30, 2018, file photo, Dallas Cowboys' Byron Jones, left, tries to catch New York Giants' Saquon Barkley during the first half of an NFL football game in East Rutherford, N.J. The dynamic second-year running back is worth the price of admission and can help the team pull off upsets by himself. (AP Photo/Bill Kostroun, File)

Weaknesses: QB Eli Manning's mobility against rush. Four-game suspension of Tate for PED use. Depth on O-line: C-G Spencer Pulley only real backup. James Bettcher's defense hasn't shown ability to pressure QBs. That was problem last year and isn't fixed despite addition of Lawrence and Golden. Unit has trouble getting off field.

Fantasy Players To Watch: NFL Offensive Rookie of Year Barkley led Giants in rushing and number of receptions, and led league in yards from scrimmage. Zeitler and Remmers help O-line. Manning might surprise if he gets time. Jones is wild card: No. 1 pick can play if he gets in.