Giants RB Barkley has no fear returning from torn ACL 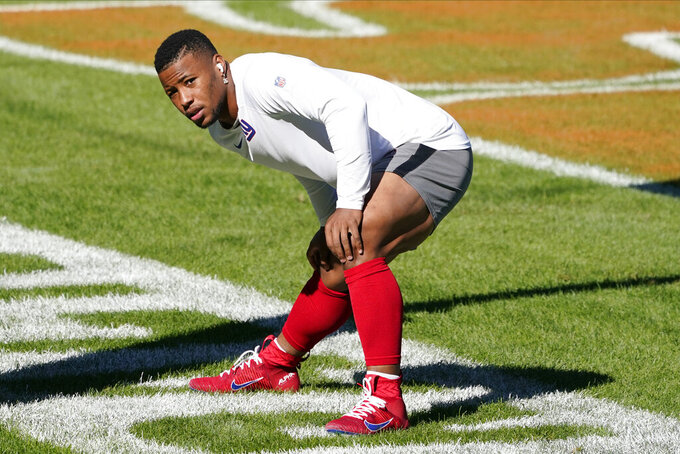 FILE - New York Giants running back Saquon Barkley warms up before an NFL football game against the Chicago Bears in Chicago, in this Sunday, Sept. 20, 2020, file photo. Barkley isn't going to work out with teammates on the field until his rehabilitation from a major knee injury is complete. Barkley, who was hurt in the second game last season, was not on the field Tuesday, June 8, 2021, as the Giants opened a three-day mandatory minicamp at their headquarters near MetLife Stadium.(AP Photo/Charles Rex Arbogast, File)

Saquon Barkley isn't spending a lot of time worrying whether he will return from a major knee injury and be the same running back who gave defensive coordinators headaches preparing for the New York Giants.

His status is uncertain with the start of the NFL season three months away.

All the 24-year-old Barkley can do is show up at the Giants' headquarters in the Meadowlands and put in the work to get his right knee healthy. It's similar to 2019 when he was bothered by an ankle sprain for a month.

It's grinding work, mostly away from his teammates and in the company of trainers, exercise and rehabilitation experts. It's one day at a time, and then do it again the next day.

If he is lucky, he can look out the window and catch a glimpse of his teammates working out.

“I have this belief you can control what you can control,” Barkley said Wednesday. “Both those times I was hurt there was nothing I could have done that would have changed. So for me, I’m going to continue to work and rehab and try to control the things that I control. Go out there and play free and go out there, be 26, and be Saquon Barkley, that big kid who loves to play football, plays with a smile on his face, and plays for the team.”

Barkley said there is no fear in returning. Initially, he said a player will have conversations with himself about returning, and then move on.

On the second day of a mandatory training camp on Wednesday, Barkley shed no clue on whether he would be ready for the start of the season. He's not even on the field with teammates for the workouts and he is being patient.

The question that seems to be on everyone's mind is whether he will perform like the player who was the 2018 NFL Offensive Rookie of the Year and who had consecutive 1,000 yard-rushing seasons.

Barkley carried the ball 19 times for 34 yards last season and caught six passes for 60 before being hurt in the first half against the Bears.

The Giants (6-10) spent the rest of the season using a variety of running backs. Wayne Gallman and Dion Lewis got carries and quarterback Daniel Jones used his legs to add a little extra to the ground game.

Barkley refused to say whether he has reached the point in his rehabilitation where he is running, cutting and making football moves.

Entering his fourth season, Barkley said he is not thinking about a new contract. His only focus is the rehab, for now.