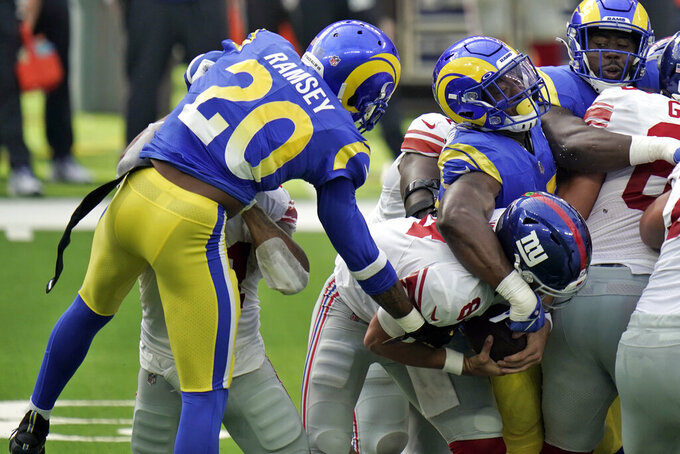 Speaking to the media for the first time since squaring off with Ramsey on the field after the Rams' win Sunday, Tate refused to discuss the incident in detail on Thursday. He insisted he has put it behind him.

Both players face possible fines or suspension from the NFL. Their teams have indicated neither will face any disciplinary action from them.

In a virtual news conference after the Giants (0-4) practiced for Sunday's game in Dallas (1-3), Tate said little when asked what happened after the final whistle in the Rams' 17-9 victory over New York in Inglewood, California.

“I don’t want to backpedal and discuss that because I don’t think, you know, going back to that is going to help us this week,” Tate said. “I really don’t want to draw any more attention or put any more highlights out there that don’t have anything to do with Dallas. So I just kind of want to keep moving forward and, you know, get a win this week. ”

Ramsey has not spoken about the incident.

.The two Nashville-area natives have a feud regarding Ramsey’s former relationship with Breanna Tate, the mother of Ramsey’s two young children and Golden Tate’s sister.

Ramsey and Breanna Tate broke up last year, reportedly while Breanna Tate was pregnant with their second child. Golden Tate made his displeasure with Ramsey known on social media, and it boiled over in their first on-field meeting since then. They had already engaged several times on the field during the game, and Ramsey made a spectacular, bone-crunching hit on Tate on a key third down in the fourth quarter.

Tate said he has spoken with his sister about the event in detail. He did not reveal what was said and again said he wanted to move forward. The 31-year-old receiver also refused to answer a question about regretting the incident.

Coach Joe Judge said his players told him that Tate did not throw the first punch. People in the stadium who saw the fight said it was hard to tell who instigated it.

Now in his 11th season, Tate is not sure whether the NFL will take action against him and Ramsey. A fine would be more probable than a suspension for an incident that was quickly broken up by fellow players and coaches.

“I’m just practicing trying to get ready for Dallas this week,” Tate said. “I mean, we’re hungry for a win right now. That’s all that matters. And I don’t want to draw any attention away from what’s important, which is Dallas.”

At the end of his virtual press conference, Tate was asked about the lack of bruising on his face