Giants to retire Hall of Famer Strahan's jersey in November 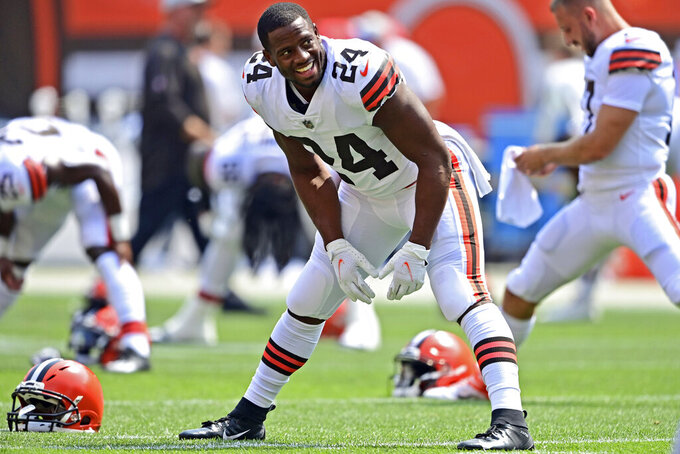 FILE - In this Sunday, Aug. 22, 2021, file photo, Cleveland Browns running back Nick Chubb warms up before an NFL football game against the New York Giants in Cleveland. Cleveland’s star running back has partnered with a charity close to his heart with the launch of “Chubb Crunch,” a cereal being gobbled up by Browns fans in record numbers. (AP Photo/David Dermer, File) 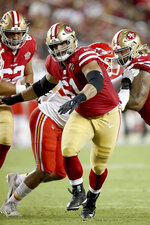 The New York Giants are going to retire the No. 92 jersey of Hall of Fame defensive end Michael Strahan this season. The ceremony will take place on Nov. 28 at MetLife Stadium at a game against the Philadelphia Eagles.

Strahan spent his entire 15-year career with the Giants and was the captain of their 2007 Super Bowl championship team. He was a four-time All-Pro, a seven-time Pro Bowler and the NFL Defensive Player of the Year in 2001 when he set the league’s single-season record with 22 1-2 sacks.

“Michael Strahan was one of the greatest players in franchise history,” says John Mara, the Giants president and chief executive officer. “He deserves to have his number retired as other Giants immortals have, including Mel Hein, Frank Gifford and Lawrence Taylor."

Strahan’s jersey will be the second retired by the Giants this season. On Sept. 26, two-time Super Bowl MVP Eli Manning will have his No. 10 removed from circulation when the Giants host the Atlanta Falcons.

Strahan owns the franchise career record with 141 1-2 sacks. It was the fifth-highest total in NFL history when he announced his retirement on June 9, 2008. It is currently the sixth-highest total.

Since his retirement, Strahan has worked in television. He is a host of ``Good Morning America'' and an analyst on “FOX NFL Sunday.”

Jordan Bryant and Shivanie Ghansiam, who attend the University of Florida, as well as Malia Hollins (Howard University) and Lydia Houie (North Carolina at Chapel Hill) also will be recognized as winners of this year’s Buccaneers Girls in Football Scholarship during Thursday’s NFL season opener between the Bucs and Dallas Cowboys.

“These young women are showing the world that football is a sport for everyone,” Gronkowski said. “They’ve earned this scholarship through their hard work, dedication and love for the game. It’s an honor to meet them and I’m excited that they’ll get to kick off the season with us at Raymond James Stadium.”

Bucs co-owner Darcie Glazer Kassewitz said the franchise is “committed to increasing awareness of the opportunities for girls and women in football and supporting them in this pursuit.”

“These student-athletes are leading the way by pursuing their goals, and that’s what this scholarship is all about,” she said. “We are proud of these young women who represent a generation of girls that are making an impact on the field, in the classroom and in their communities.”

The Girls in Football Scholarship was established for graduating high school seniors participating in a form of organized football with plans to enroll in a full-time accredited four-year college or university.

Bryant, of Hialeah Gardens, Florida, and Ghansiam, of Bradenton, Florida, are majoring in business administration and political science, respectively. Hollins, of Powder Springs, Georgia, is an engineering major. Houle, of Westminster, Maryland, is pursuing a degree in exercise science.

Before a run at the Super Bowl, Nick Chubb’s first stop is a cereal bowl.

Cleveland’s star running back has partnered with a charity close to his heart with the launch of “Chubb Crunch,” a cereal being gobbled up by Browns fans in record numbers.

Chubb is featured on the box in the guise of Batman, a favorite superhero who inspired him after he suffered a knee injury at Georgia.

“I just kind of made that my identity through the rehab, through the training, getting back to 100%,” he said. “That’s why I like Batman.”

A portion of sales proceeds for the cereal benefit First Candle, an organization working to eliminate Sudden Infant Death Syndrome (SIDS) and help families grieving from the loss of a child. A few years ago, Chubb’s sister, Neidra, lost an infant son to SIDS.

“My sister’s been through a lot,” Chubb said. “I’ll never forget that morning, waking up to the text. I was here in Cleveland and we were playing Pittsburgh the next day and it was hard to play that game knowing what was happening back home.”

Chubb said he’s proud to be helping his sister and backing such a personal cause.

“I know she’s happy just to get the awareness out, that’s what she’s big about now,” he said. “She doesn’t want it to happen to anybody else. So for her it’s getting awareness out, telling the world her story, certain ways to prevent it, things like that. I know that’s big for her, so it’s big for me.”

Connor McGovern knew the question was coming as soon as he heard the New York Jets traded for Shaq Lawson.

The two were part of a viral video two years ago when McGovern was playing for Denver and Lawson for Buffalo.

“If you just type my name into Google, it’s always the first thing that comes up,” said McGovern, now a Jets center.

After the Bills’ 20-3 win on Nov. 24, 2019, the teams were coming off the field in Buffalo when Lawson found McGovern. The two exchanged words, with Lawson shouting that he had two sacks on him and “you’ll remember me now!” Apparently, Lawson thought McGovern had said he didn’t know who Lawson was.

“That video did go viral,” Lawson said this week. “And then a couple of days ago, I saw that video went viral again.”

That’s because the two are now teammates with the Jets after Lawson was acquired from Houston last Sunday.

“I said something to him last year, I said, ‘Yo, that’s my dawg from Denver,’” Lawson said with a laugh. “And then we squashed it. Now we’re on the team, so it’s going to be great. It was just a competitive thing.”

The two faced each other last season twice when McGovern’s Jets took on Lawson’s Miami Dolphins.

“It was all cordial,” McGovern said. “It was just playing any other opponent. It’s game time, everybody’s in the moment and what have you.”

And while the details of what exactly caused that initial interaction are still a bit unclear, McGovern made sure to shed some light on one thing.

“I will say, to set the record straight,” McGovern said while smiling, “the two sacks were not on me.”

Dakoda Shepley is far from a household name in NFL circles. The native of Windsor, Ontario and graduate from the University of British Columbia is in his third year as a reserve center who was cut by the San Francisco 49ers earlier this week and claimed off waivers by the Seattle Seahawks.

Despite an NFL career lacking notoriety to date, Shepley has a claim no one else in football can match: He was in the movie “Deadpool 2” portraying comic book villain Omega Red on the big screen.

“I was like an Easter egg character,” Shepley said.

Here’s the story: During his time at UBC, Shepley ended up working as an extra in films being shot in Canada. He joked that his first movie ended up being a Hallmark film. “My grandma loved that.” He also played a body double in a Netflix film “Game Over, Man,” released in 2018.

But his most notable role came by accident. Shepley was cast as an extra for “Deadpool 2” starring Ryan Reynolds. As he was getting set for costume and makeup, the casting director told Shepley his role was getting upgraded.

It’s a very brief scene and was cut from the theatrical release, but Shepley appears as Omega Red during a prison scene. The scene was included in the extended version added for home video release.

Omega Red is a villainous character from the Marvel Comics and mostly associated with the X-Men comics.

“There was people who were working on the movie who were like, ‘You’re Omega Red. I’ve been a Marvel fan my whole life,’” Shepley said. “I had no idea of any of that. But I do like the comics.”

Seattle claimed Shepley hoping to continue his development as a center with some athleticism. Shepley played guard through last season when he moved primarily to center.

“I got told after the end of last season that I’m going to be a center in the league,” Shepley said. “So ever since last season, I’ve been teaching myself and learning how to snap and read the defense like a center should, and I think I’ve gotten pretty good at it.”

Telemundo Deportes, the Spanish-language home of NBC’s “Sunday Night Football,” will begin its league coverage, as will NBC, with the kickoff game between Dallas and Super Bowl champion Tampa Bay next Thursday night.

Throughout the 2021 season, Telemundo Deportes will carry the entire Sunday night schedule, and will conclude its coverage as the exclusive Spanish-language outlet for the Super Bowl on Feb. 13. It will be the first time a Super Bowl will be televised on a Spanish-language broadcast network in the United States.

Universo will televise 20 matches, including two in the playoffs. Telemundo Network will broadcast the Sunday prime-time wild-card playoff game.

“As the Spanish-language home of `Sunday Night Football' for the next 13 years, we look forward to presenting the 2021 season to the growing NFL Hispanic fans, culminating with Super Bowl 56,” said Ray Warren, president of Telemundo Deportes. “We are thrilled to enhance our presentation of the games with more studio content across platforms and NFL experts, providing Hispanic fans more opportunities to engage with NFL content that is relevant and tailored to them.”