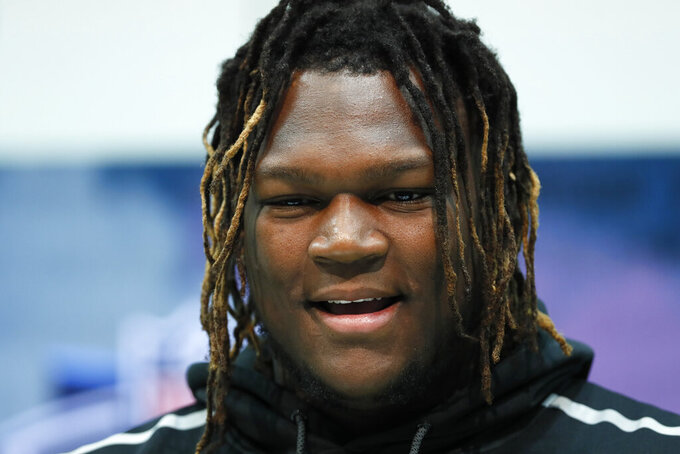 FILE - Georgia offensive lineman Isaiah Wilson speaks during a press conference at the NFL football scouting combine in Indianapolis, in this Wednesday, Feb. 26, 2020, file photo. The New York Giants have signed tackle Isaiah Wilson to their practice squad, giving the former first-round draft pick another chance to overcome off-the-field issues and make it in the NFL.Wilson was taken 29th overall in last year's draft by the Tennessee Titans out of Georgia. (AP Photo/Charlie Neibergall, File)

EAST RUTHERFORD, N.J. (AP) — The New York Giants have signed tackle Isaiah Wilson to their practice squad, giving the former first-round draft pick another chance to overcome off-the-field issues and make it in the NFL.

Wilson was taken 29th overall in last year's draft by the Tennessee Titans out of Georgia. He missed time both with COVID-19 and legal problems and played only three snaps on offense and one on special teams.

The Titans traded him and a seventh-round pick in the 2022 draft to Miami on March 9 for a 2021 seventh-round selection. Wilson was waived by the Dolphins 11 days later after showing up late for meetings and failing to show for workouts he had scheduled.

“I can pretty much deal with anybody as long as they’re themselves and they’re honest and, in this setting, that they love football," coach Joe Judge said Wednesday when asked about dealing with troubled players, without referring directly to Wilson. “So, if you meet those three things — if you’re an honest person, you’re going to be yourself on a daily basis and you love football — yeah, I’ll be able to deal with you, no problem.”

The Giants’ offensive line has lost two starters, with left guard Shane Lemieux out with a knee injury and center Nick Gates lost to a broken leg on Sept. 16.

Wilson had an eventful season with the Titans in 2020. He was placed on the reserve/COVID-19 list when he arrived at training camp and went back on that list Sept. 6.

Wilson had only been off the reserve/COVID-19 list for 12 days before Tennessee State police responded to the smell of marijuana at an off-campus apartment on Aug. 15. Their report said the player went to the second-floor balcony where he appeared to briefly consider jumping.

The rookie was arrested in last September and charged with drunken driving after he was spotted doing “doughnuts” in an intersection before crashing into a concrete wall.

Wilson also was suspended by the Titans for the game against the Browns in early December for violating team rules.

The 6-foot-7, 330 pound lineman was arrested on Jan. 7 in Georgia following a high-speed chase. Wilson and a woman were charged with felony fleeing from police, possession of a controlled substance, marijuana possession, drug-related paraphernalia, reckless driving, reckless conduct and speeding in a construction zone, the Barrow County sherriff’s office reported.