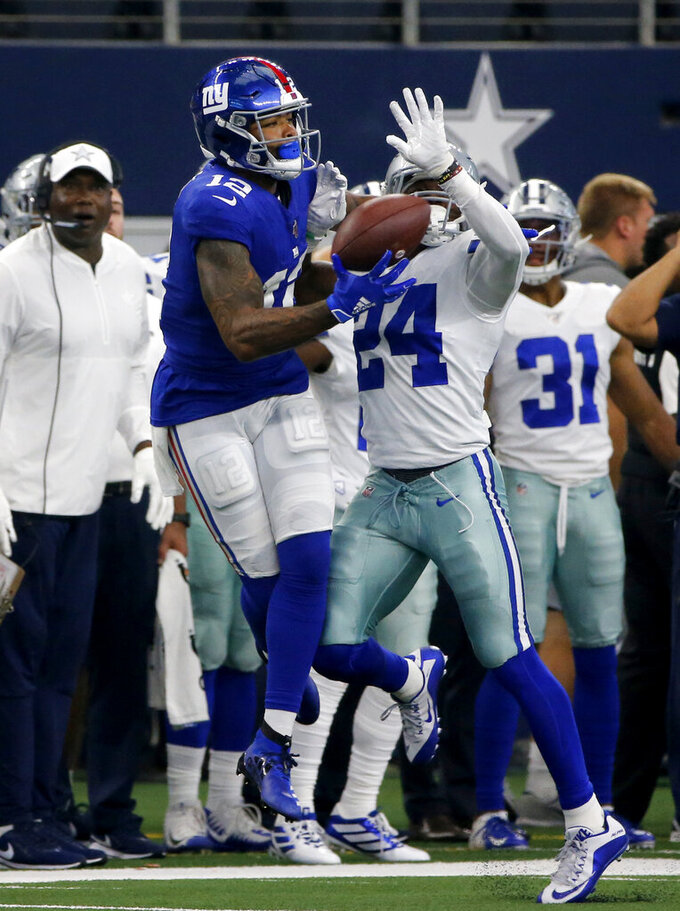 EAST RUTHERFORD, N.J. (AP) — The New York Giants may be without their top starting receivers for the home opener against the Buffalo Bills.

Coach Pat Shurmur said Friday that go-to wide out Sterling Shepard will miss Sunday's game with a concussion and Cody Latimer is questionable with a calf injury. Rookie receiver Darius Slayton will miss his second straight game with a hamstring injury and veteran Golden Tate III is suspended for the first four games for violating the NFL's performance-enhancing substance policy.

Shepard was hurt in the season-opening loss to Dallas last weekend, while Latimer injured his calf in practice Wednesday.

Bennie Fowler, who had five catches for 40 yards in the 35-17 loss to the Cowboys, probably will start at one of the wide receiver spots. Latimer might be the other starter if healthy, but the role could also go to Russell Shepard, Cody Core or TJ Jones, who was re-signed earlier this week after leading the team in receptions in the preseason.

"I don't know if I feel any pressure," Fowler said. "If it is pressure, it is good pressure, especially to go out there and do well. They have the faith and confidence in us to do well."

This is not a group of inexperienced backups. Fowler is in his fifth year and won a Super Bowl with the Broncos and Latimer. Russell Shepard is in his seventh season. Jones is in his fifth and Core his fourth.

Latimer ran a couple of routes Friday and hoped to play Sunday, although Fowler was confident he would be on the field.

Shurmur said Sterling Shepard was able to do some things at practice on Friday but not enough to finish the concussion protocol.

This could be a great opportunity for Jones, who caught 12 passes for 146 yards and two touchdowns in the preseason. He was among the team's final cuts.

During the opening week, he was at home in Atlanta, staying in shape, cleaning the house and playing with his children. He watched the Giants' game.

"Whatever they ask me to do I am ready to do," said Jones, who also handled kickoff and punt returns in the preseason. "I made sure that was my focus back home, that no matter what I was asked to do, I physically would be able to go out and play."

Jones said there have been a few additions to the playbook for the regular season but nothing he can't handle.

The Giants have other options on offense for the game. They can use more two tight-end formations or even employ tight end Evan Engram as a wide receiver because of his speed.

Engram had career bests of 11 catches for 116 yards and a touchdown on Sunday.

"The Bills are going to come out and have a game plan and they are probably preparing as if everybody is going to play," Engram said Friday. "We just have to continue to stay the course and guys will have to step up all across the board."

Shurmur could also decide to give the Bills a heavy dose of halfback Saquon Barkley. He was second in the league in rushing last season and led the Giants with 91 catches. He also scored 15 touchdowns.

Barkley also has the ability to line up as a wide receiver.

"We just have to play with the players you have," Shurmur said. "Anybody you put out there, you expect them to make plays."