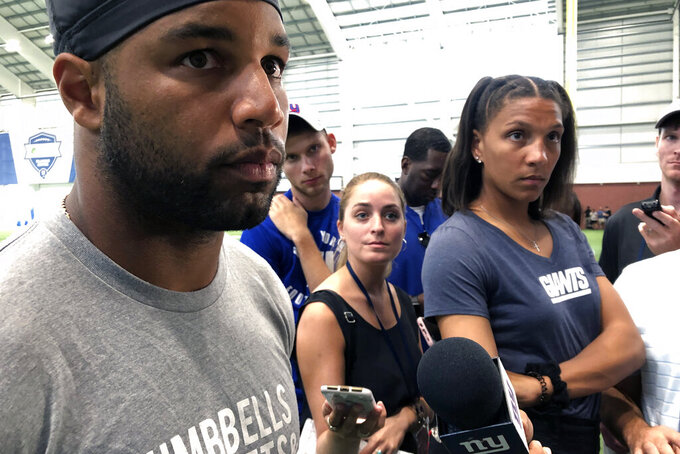 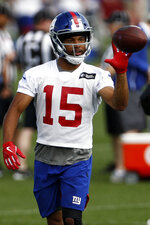 EAST RUTHERFORD, N.J. (AP) — New York Giants wide receiver Golden Tate III never hesitated to take a prescribed fertility drug because the doctor who wrote the prescription told him he had given it to other NFL players and it was not banned.

Speaking to reporters a day after an independent arbiter upheld his suspension for the first four games of the regular season, Tate said Wednesday he was considering legal action against the doctor to recover the $1.2 million in salary he will lose during his suspension. He did not identify the doctor.

In the candid interview after practice, Tate said he was frustrated, accepted both the blame and the punishment, and added he was having a tough time for letting down his teammates and the organization for the start of the season.

"I have been thinking about this since April and May," Tate said. "This has been on my mind. I have lost a lot of sleep. It's kind of hurt me to my core having to explain to the organization what is going on. I'm just ready to move forward. I just want to play football. You look at me. I am not trying to cheat."

Tate signed a $37.5 million contract as a free agent with the Giants in March. He said he started taking a fertility drug in April and a couple of days later said he was randomly tested for drugs by the league. He learned shortly after that the drug, which he said was clomifene, was a banned substance.

Under the current collective bargaining agreement, players can use fertility drugs, but they must get prior approve before taking them. Tate did not.

"Initially the doctor said it was not a banned substance and he had given it to other NFL players, that's why I trusted it and kept living my life," Tate said.

The 10-year veteran said he had second thoughts after talking about another player being suspended with someone who worked for him.

"A light kind of went off in my head and I decided to call the doctor and make sure, just to make myself feel better," Tate said. "I asked what the active ingredient was and he looked it up right then and there, and sure enough it was a banned substance.

Tate and his wife, Elise, had their second child in February. He would not say why they went to a fertility specialist two months later.

While he didn't answer the question, he was reminded he called two former Seattle teammates selfish for being suspended for using a recreation drug.

"That's a completely different situation than me taking a substance trying to have another kid," said Tate, who split last season with the Lions and Eagles, catching 74 receptions for 795 yards and four touchdowns in 15 games.

Clomifene, which has the trade name of Clomid, can increase testosterone in males.

"It's very frustrating. I have no problem accepting the punishment," said Tate, who first tweeted about his suspension in late July, saying he would appeal it. "Ultimately I am responsible for what is put in my body, ultimately. The tough thing I am dealing with is that I am letting down a lot of people. The guys in the locker room. The people in the organization. That's what has been crushing me this whole situation."

Tate is eligible to practice in the preseason and play in games. He can have no contact with the team during his suspension.