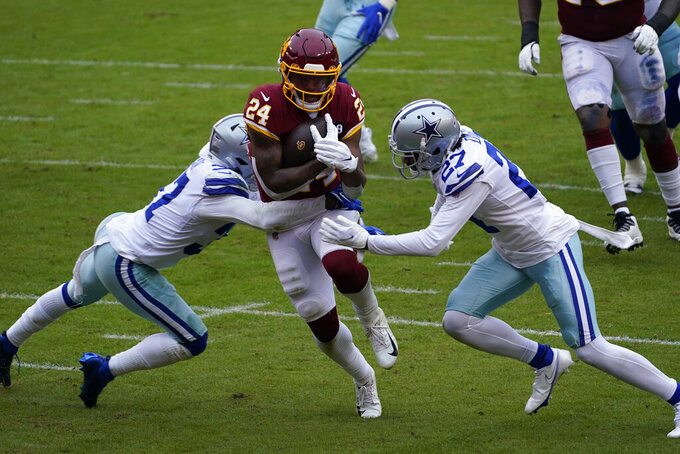 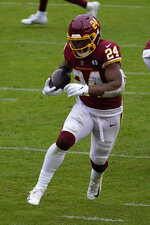 After carrying the ball just 33 times in his college career, Antonio Gibson ran 20 times alone in Washington's most recent game.

Gibson is figuring it out, and the rookie running back may be the key to Washington's offense. He rushed for 128 yards and a touchdown on 20 carries in a 25-3 rout of rival Dallas on Sunday, and getting the ground game going allowed quarterback Kyle Allen to pick his spots and better manage different situations.

“It starts with the run game,” No. 1 receiver Terry McLaurin said. "AG just took the ball and he ran. He ran decisive this week. ... The way he’s running the ball is great behind our offensive line and we have to continue to build on that. It helps our play-action game. It helps a lot of our offensive plays when we run the ball really well.”

Washington racked up 208 rushing yards, which opened up things for Allen to throw for two touchdowns and 189 yards. Building an early lead on the strength of opportunistic offense and dominant defense paved the way, and it's a recipe that could make Washington (2-5) competitive in the weak NFC East.

The defense took a hit with safety Landon Collins' season-ending Achilles tendon injury, so it's a good time for the offense to get on track.

“We want to be balanced and we want to run the ball well,” offensive coordinator Scott Turner said Monday. "We’re growing and getting better. It’s starting to look more and more what we envisioned it looking like.”

The defense piled up six sacks, an interception and a forced fumble that became a safety in the Cowboys game. Beyond recent first-round picks Chase Young (second overall in 2020), Daron Payne (13th in 2018) and Jonathan Allen (17th in 2017), there's enough accumulated talent on this unit to make a difference.

“We’re building confidence because of the way we’re working at it,” defensive coordinator Jack Del Rio said. “When a group of men come in every day with great energy and a great focus and desire to improve and go out and put in the work, I think they should expect to improve.”

It's nit-picking right now, but red-zone conversions could be better for the offense, which missed on fourth-and-goal from the 1 and settled for a field goal later.

“We could’ve converted in the red zone a couple times a little better, but overall, it was a good performance,” Turner said. “I think that’s something that we can really build on going forward.”

Coach Ron Rivera called it running back by committee when Washington released Adrian Peterson, but Gibson is definitely the feature back ahead of J.D. McKissic and Peyton Barber. Gibson played mostly receiver at Memphis and got some jet sweeps and other zone runs, yet team brass saw him as a running back and he's getting more comfortable with all aspects of the position.

“It’s definitely a new ballgame for me, I get beat up a little bit more, but I can take it,” Gibson said. “Just learning every week, know when my blockers are going so I can you know kind of anticipate where I need to go before the play actually happens and it helps a lot.”

It's too early to worry about kicker Dustin Hopkins' job security, but he missed another field-goal attempt, this time from 44 yards, his fourth in 12 chances this season. Hopkins only missed five of 30 in 2019, and Washington has Norwegian kicker Kaare Vedvik on the practice squad, just in case.

67 — Washington's 67% conversion rate on third downs in the first half showed just how big a difference an effective running game has on keeping the ball and preventing the defense from getting fatigued.

Players and Rivera, who underwent his final skin cancer treatment Monday, get to rest up with the bye week before hosting the New York Giants on Nov. 8 with 3,000 fans allowed in the stadium. Washington will want to avenge its loss at New York on Rivera's 2-point conversion gamble, and can keep pace in a bad division.