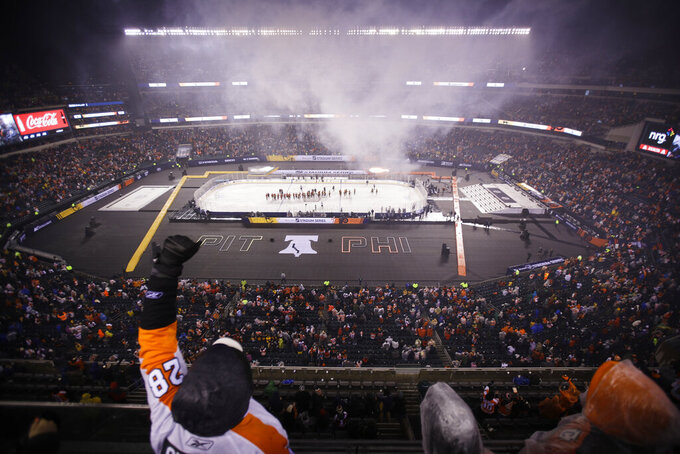 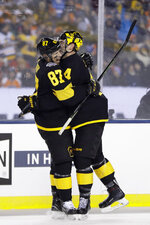 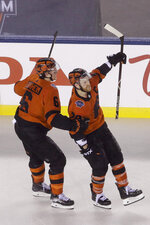 Giroux's shield provided little relief from the heavy rain that turned the ice into such a puddled mess that it needed a squeegee more than a Zamboni. His visor fogged up and he was busy knocking raindrops off to get a clear view of the ice.

Certainly not on the scoreboard.

But with most of the 70,000 fans gone, and Pittsburgh's offense dried up, the Flyers' rain-delayed rally gave the franchise a win to remember.

Down two goals in the third period, the Flyers scored twice in the waning minutes and Giroux had the winner 1:59 into overtime to lift the Flyers to a 4-3 win over the Pittsburgh Penguins on a soggy Saturday night at Lincoln Financial Field.

"I was able to get a step on their D and squeak in my goal," Giroux said.

Giroux scored the winner in his 800th career game and kept the Flyers' slim postseason hopes alive as they head into Monday's trade deadline knowing the team could be on the verge of a breakup.

Wayne Simmonds, the hulking free-agent winger, is a top target to get moved and his teammates seemed to realize it after pulling off the stunner. Simmonds got hugs from his teammates in the locker room as he pulled on the player of the game helmet for what could be his final time as a Flyer.

"Obviously, I'd love to stay here but it's out of my hands right now," Simmonds said. "It is what it is at this point."

The Flyers and Penguins took one of the NHL's more heated rivalries outdoors and into prime time as part of the Stadium Series showcase.

Gritty, the Flyers wildly popular rookie mascot, zip lined in a glow-in-the-dark jersey from the top of the Linc to kick off the party, and later was caught streaking as he scurried away from "security" in a mad scamper toward the tunnel.

As usual, Gritty was a hit.

Simmonds delivered perhaps the biggest one at the Linc since Brian Dawkins roamed the Eagles' secondary when he plowed Penguins defenseman Brian Dumoulin into the boards with a shoulder to the head. Dumoulin dropped to the ice while a melee escalated around him and the crowd went wild. Pittsburgh defenseman Kris Letang appeared to get hurt in the dust-up and the Penguins played the last two periods without their top two blue liners. Dumoulin suffered a concussion and Letang was being evaluated for an upper-body injury.

"It looked like he made contact with his head, and it's tough to see that," Penguins captain Sidney Crosby said.

Crosby tormented the Flyers one more time and seemed poised to keep them winless in another outdoor game (1-3). Inside, outside, all around the state, Crosby crushes the Flyers. He gave the Penguins a 1-0 lead with his 26th goal of the season midway through the first period and had an assist on Justin Schultz's goal for a 2-1 lead in the second.

Crosby now has 99 career points in 66 games against the Flyers in venues that stretch from the Civic Arena, PPG Paints Arena, Heinz Field, Wells Fargo Center to the Linc.

Crosby has three Stanley Cups — or, one more than the Flyers have in franchise history — and there was plenty of yellow-and-black scattered throughout Philly. The stadium complex parking lots were fit for an Eagles tailgate and fans camped out for a party since early morning. Flyers fans needed an excuse to cut loose — the season has been a disaster and both the general manager and coach were fired only two months into the season.

For 2½ periods, the game was as gloomy as the weather.

With rain pounding the ice in third period, the Flyers got going. James van Riemsdyk, playing in his sixth outdoor game, made it 3-2 on a power-play goal with 3:04 left. Jake Voracek tied it at 3-all with 19.7 seconds to, sending what was left of the sellout crowd into a frenzy.

"I think we've had some weird comebacks this year, " van Riemsdyk said.

Giroux made sure the game didn't last much longer, slipping the winner past Matt Murray for his franchise-record 11th OT goal, and the Flyers celebrated in the mist.

"It was just kind of a relief to finally win an outdoor game," Giroux said. "It was a battle to get it, but sometimes those games — the hardest to win, are the nicest to win."

Gritty had some serious competition for Flyers rookie of the year when the team called up 20-year-old goalie Carter Hart, who won eight straight games to give the Flyers a brief glimmer of playoff hope. Flyers coach Scott Gordon caused a bit of an uproar when he announced Friday his decision to go with Brian Elliott in net over Hart. How could the Flyers bench their blossoming star in their feature game? By Saturday afternoon, critics had their answer: The Flyers said Hart will miss at least 10 days with an undisclosed injury.

Without Hart, Elliott struggled to keep pace with the Pens. Elliott gave up a rough one in the third when Evegni Malkin's shot popped up and into the net for a 3-1 lead as rain turned into a downpour.

"It's coming down pretty good, with a lead that would usually work to your advantage with pucks and things like that," Crosby said. "But, unfortunately we gave them some life there and they took advantage of it."

The Pens could have used an umbrella from the Flyers' scoring barrage the rest of the way.

NOTES: Malkin has five goals in his last five games. ... The crowd of 69,620 was the fifth-largest in NHL history. ... The on-ice mics picked up plenty of profanity from the refs and players during a scrum late in the game. ... Country star Keith Urban played a set in the first intermission.