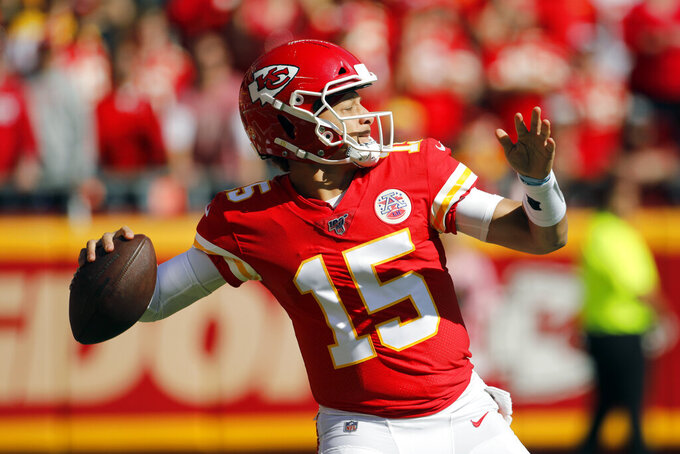 The visuals will have to suffice. They're not simulating the Kansas City Chiefs and their dynamic quarterback at full speed during practice this week with such a short turnaround.

They're basically holding a series of walkthroughs rather than exerting energy ahead of their Thursday night showdown.

"It's hard, particularly playing an offense as prolific as this. You'd like to go out there and experience playing against some of their plays — at least at a practice tempo," Broncos coach Vic Fangio said. "We won't be able to do that totally this week. It's a major, major adjustment from a weekly schedule."

Von Miller won't deviate from his customary routine to get ready as the Broncos try to snap a seven-game losing streak against Kansas City. Instead, he will condense everything. So his customary every-other-day plunges into a cold tub to get his body ready will have to come on a back-to-back-to-back basis.

Of course, there's the energy of playing the Chiefs in front of a national audience to boost him, too. The Broncos (2-4) enter on a two-game winning streak after starting out 0-4 while the Chiefs (4-2) have dropped two in a row following a perfect September.

Suddenly, the Broncos have a real chance to jump right back into the AFC West race.

"I mean, everything is great about it except the short time span between games," Miller said. "Everything else is super exciting. Going against the Kansas City Chiefs, division rival, versus Patrick Mahomes, one of the best quarterbacks there is — they're going to be ready to play. It's going to be a great night."

The lighter-than-usual prep work for the Broncos includes mental reps in practice and plenty of film work. That and anything else to get the body right.

"You've got to try to recover any way you can," safety Kareem Jackson said. "You've got to take those couple of extra steps or extra stretches or do whatever you've got to do to try to get your body back to somewhat of reasonable shape so you can go out there and perform on Thursday. It will definitely take every day this week.

"As pros, it's part of the job and you've just go to know what your body is going to need."

Because Mahomes, bum ankle and all, promises to be a handful.

He's thrown 14 touchdown passes with just one interception this season. As for whether the Broncos want to keep him inside the pocket or flush him out, well, it's a pick-your-poison sort of deal.

After all, it's hard to forget the right-handed Mahomes' left-handed throw last season in Denver on a Monday night. It was all the buzz on social media. As he scrambled to his left on third-and-5 in the fourth quarter, Mahomes switched the ball to his other hand so Miller couldn't strip it from him. Then, Mahomes lofted a perfect strike to receiver Tyreek Hill for a 6-yard gain and the first down as the Chiefs rallied for a 27-23 win.

Especially if the Chiefs can establish their ground game. Stopping that is high on Denver's to-do list, because "if they get started running the ball and they run it all over the place, it's going to be impossible to win that game," Miller said.

The Colts and Texans both won at Arrowhead Stadium this month by running the ball and keeping Mahomes on the sideline. The Broncos will try to do the same behind running backs Phillip Lindsay and Royce Freeman.

"They're going to come in energized and ready to go, knowing that this one is a big one for them and a big one for us," safety Justin Simmons said. "It will be good."

NOTES: Fangio didn't have updates on Broncos WR Emmanuel Sanders (knee) or OL Ja'Wuan James (knee). ... DE Adam Gotsis has been inactive for the last two games after starting three of the opening four contests. "Naturally, he was disappointed," Fangio said. "He's handled it well as a good teammate would."