Gladys Knight, Chloe x Halle give thanks after performance 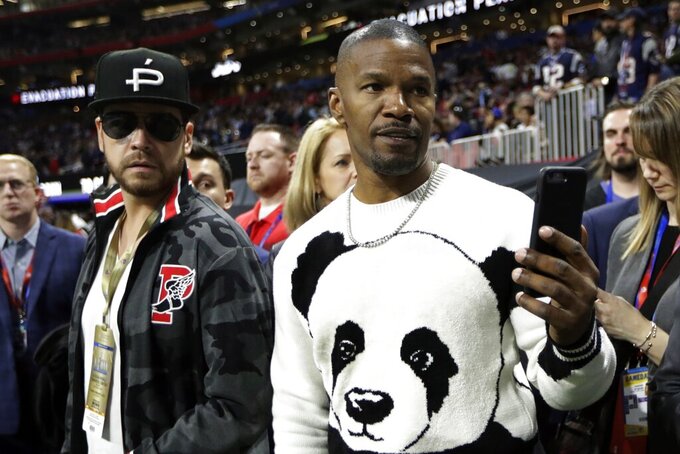 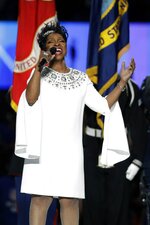 ATLANTA (AP) — Not everyone is watching Super Bowl 53 for the love of football — celebrities are a big part of the day, too. Here's a breakdown of what is happening with entertainers on Sunday in Atlanta.

Gladys Knight was all smiles as she blew kisses to everyone, and Chloe x Halle were almost speechless after their pregame performance at Super Bowl 53.

Knight called her rendition of the "The Star-Spangled Banner" an "exciting moment" and "one to remember" in the tunnel of the Mercedes-Benz Stadium, where the New England Patriots played the Los Angeles Rams on Sunday in Atlanta. The 74-year-old singer was all smiles as she thanked everyone who supported her through the controversy involving performers who were criticized for performing at the NFL's marquee game.

Before Knight performed, the R&B sister duo Chloe x Halle sang "America the Beautiful." The group said their experience was "wonderful" and were "thankful to God" for the opportunity.

Both Knight and Chloe x Halle put on strong performances. They have been surrounded by the controversy after some have boycotted the NFL over treatment of Colin Kaepernick, the former quarterback who protested racial injustice by kneeling during the national anthem.

While some performers declined participation in the Super Bowl, Knight said she hoped her anthem would unite people.

Maroon 5, Travis Scott and Big Boi will headline the halftime show at the Mercedes-Benz Stadium.

After taking pictures with them, Foxx shook Lewis and Young's hand then told them they inspire him. Lewis and Young were sitting in the back of the golf cart while Dr. Martin Luther King Jr.'s youngest daughter Bernice King sat in the front.

Beforehand, Foxx strolled down the sideline and took videos of the crowd at the Mercedes-Benz Stadium as many chanted his name before the New England Patriots faced the Los Angeles Rams in Atlanta on Sunday. The Oscar-winning actor said he is a longtime fan of the Dallas Cowboys, but he is rooting for the Patriots.

"I'm going with Tom Brady today," Foxx said. "I think he's going to pull it off."

Foxx said he's been coming to the Super Bowl for many years calling each time a "different experience." He performed at the Maxim party that also featured Future and Diplo on Saturday night.

"I've been coming to the Super Bowl for many years," he said. "Every year, it's special. It's great. It's nothing like football."

Actor-comedian Steve Harvey and ex-NBA player Steve Smith were among the celebs and athletes who mingled during Super Bowl 53.

Harvey put his head down and tried to cover up his face before bumping into Smith, who played for several teams including the Atlanta Hawks and Miami Heat. The two embraced each other with a handshake before both walked into the suite.

Harvey, who hosted the NFL Honors on Saturday, shared the same suite with Jon Hamm, Swizz Beatz and Camila Mendes. They were only a couple doors away from Maroon 5 and Big Boi, who performed at halftime of the game.

"I loved Maroon 5's performance. They rocked it," said retired NFL player Curtis Martin, who played for the New York Jets and Patriots. "Travis (Scott) and Big Boi was amazing too. I liked how they mixed things up. Big gave that ATL flavor."

Asked what Berg's best moment was: "When he took his shirt off. I was like 'Damn, looking good.'"

Keegan-Michael Key is a celebrity in his own right, but the actor-comedian still gets star-struck when hanging around NFL players.

"The thing is being backstage with a lot of them. You turn the corner and it's like 'Oh, there's J.J. Watt. Oh, nice to meet you. Oh, there goes Barry Sanders running around. It's nice to be behind-the-scenes. You get to meet a lot of the players. I'm such an NFL fan."

Key, who starred in the Comedy Central series "Key & Peele," said his favorite player Charles Woodson played a role in the "East-West College Bowl" skit. Woodson won a Super Bowl with the Green Bay Packers in 2011.

"We met last year for the first time, and it was an important time," Key said. "He gave us so much inspiration for that episode."

Key hopes he can one day see Beyonce sing the national anthem and perform during halftime at the same Super Bowl. She was a halftime performer in 2013 and 2016.

"Now, that would be awesome if she could pull that off," he said. "I really want to see her make that happen. I think she can. I mean, she's Beyonce."