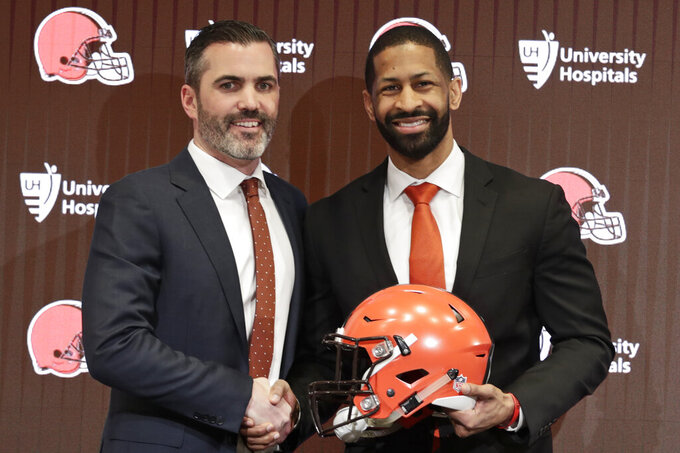 FILE - This Feb. 5, 2020, file photo shows Cleveland Browns head coach Kevin Stefanski, left, and general manager Andrew Berry posing for a photo after speaking during a news conference at the NFL football team's training facility in Berea, Ohio. Dismayed by George Floyd's tragic death in Minneapolis yet strengthened by the nationwide wave of protests that followed, Berry, one of only two Black general managers in the NFL, felt compelled to do more. (AP Photo/Tony Dejak, Fle)

Dismayed by George Floyd's tragic death in Minneapolis, yet strengthened by the nationwide wave of protests that followed, Berry, Browns vice president of football operations and one of only two Black general managers in the NFL, felt compelled to do more.

After being encouraged by employees' response to a lengthy email Berry sent calling for empathy and sympathy following “multiple senseless and tragic deaths,” the Browns launched the “Be The Solution” campaign to raise awareness and funding to fight social injustice.

“These deaths have reverberated throughout our country. Enough is enough,” Berry said in a video released by the Browns. “Words alone are not enough if we truly want change. Meaningful change comes with education, dialogue and most importantly deliberate action.”

Berry, rehired by Browns owners Dee and Jimmy Haslam in January after one season in Philadelphia, initially reached out to coworkers in an email to express his "feelings of frustration, anger, despondency and — yes — even hope throughout the week,” after Floyd's murder.

He pledged to donate $8,460 to the NAACP Legal Defense Fund to honor Floyd and other victims if at least 50 employees signed up for or donated to a social activism cause.

“What happened next gave me hope,” Berry said.

In one day, more than 50 employees accepted Berry's challenge, and the Haslams matched every dollar raised and contributed to an organizations of the employees’ choice. As of Monday, the Browns had raised more than $185,000 for 14 charities.

Now, Berry is asking Browns fans, players, alumni and media to participate, "because starting with our local communities is where we can make the biggest impact.”

First-year coach Kevin Stefanski, who has encouraged his players to “get in the arena” and use their platform to prompt change, applauded Berry's efforts.

“That is what leadership looks like,” Stefanski said Thursday on a Zoom call. "Our organization and our ownership group has always taken diversity and social justice to heart. There are so many initiatives that they are involved with over the years.

"What Andrew is doing and what this organization is doing is leading from out in front. It is awesome.”

Stefanski recently attended a peaceful protest with his young sons, an experience that has prompted him to be even more socially engaged.

“Our words matter,” he said. “I do have young kids, and there are a lot of questions and a lot of them are hard to answer – the innocence of young children that just don’t understand why somebody would be treated differently because of their skin. It is so sad that there is an environment out there that needs change, but we need to be a part of it. I just feel very strongly that we need to leave this place better than we found it and we need to do our part with this next generation.”

NOTES: Stefanski continues to operate under the assumption training camp will open on time next month. A rise in COVID-19 cases across the U.S. has led to speculation the league may push things back. It's also possible the preseason could be reduced. “If that does happen, we will be ready," he said. "Obviously, you want reps for your players from a learning standpoint and you want reps for players from an evaluation standpoint. Whatever the rules are, they will be the same for all 32 teams and we will deal with it as it comes.” ... Stefanski said WR Odell Beckham Jr. is 100 percent after undergoing core muscle surgery in January. WR Jarvis Landry has made good progress after offseason hip surgery. ... Stefanski said he's not made a decision on whether he or offensive coordinator Alex Van Pelt will call the plays this season.