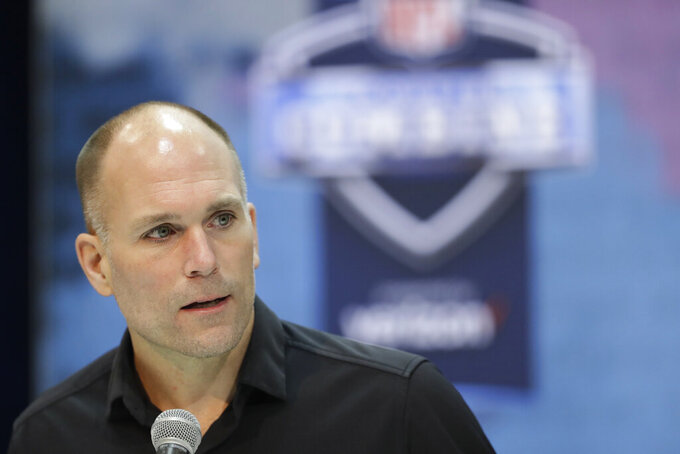 FILE - In this Feb. 27, 2019, file photo, Baltimore Ravens general manager Eric DeCosta speaks during a news conference at the NFL football scouting combine in Indianapolis. Despite Baltimore’s ascent to the top tier of the NFL last year, there’s work to be done to make this a Super Bowl-caliber team. DeCosta addressed the run defense last month by trading for Calais Campbell and signing free agent Derek Wolfe. DeCosta expects to fill a few other gaps during the NFL draft next week. (AP Photo/Darron Cummings, File)

OWINGS MILLS, Md. (AP) — The Ravens compiled a franchise-best 14-2 record last season and stormed into the playoffs with a 12-game winning streak, the most prolific rushing offense in NFL history, and a second-year quarterback who would ultimately be voted the league’s MVP.

Baltimore’s one-and-done postseason proved there was still plenty of room for improvement.

The Tennessee Titans forced Lamar Jackson into three turnovers and stuffed him twice on fourth-down runs. The Ravens' defense, which allowed an unacceptable 4.4 yards rushing per attempt during the regular season, yielded 195 yards to Derrick Henry in a 28-12 defeat.

So, despite Baltimore’s ascent to the top tier of the NFL last year, there’s work to be done to make this a Super Bowl team. General manager Eric DeCosta addressed the run defense last month by trading for Calais Campbell and signing free agent Derek Wolfe.

DeCosta expects to fill a few other gaps during the NFL draft next week.

Armed with the 28th overall pick and eight other selections, DeCosta will try to nab a linebacker or two, enhance the pass rush, find a big-play receiver and refurbish the offensive line following the retirement of eight-time Pro Bowl guard Marshal Yanda.

Most of all, DeCosta is looking to fine-tune an attack led by the multi-faceted Jackson, who ran for 1,206 yards and passed for 3,127 yards and 36 touchdowns.

“Hopefully, we can build our offense to the point where (it is) undefendable,” DeCosta said.

This is a one-of-a-kind draft because of COVID-19. There were no visits by prospects, no pro days, no face-to-face interviews in March.

But, by the time NFL Commissioner Roger Goodell puts the draft in motion from his home next Thursday, the Ravens will be ready to roll.

“We had the opportunity to meet with so many different players at the Senior Bowl, the East-West (Shrine Game) and the combine,” DeCosta said. “We’re really prepared to be the best we can be. And first and foremost, it’s really about the tape; how the guy plays.”

The Ravens enter the draft with three picks among the top 60 (28, 55, 60), a pair of fourth-rounders, two fifth-round selections, and one apiece in the fifth and seventh rounds.

The odds are high DeCosta will make a swap or two before the draft ends.

“We love to make trades. The last two years especially, I think we’ve made a ton of trades, and it’s been really fun for us,” DeCosta said. “And, actually, I think we’ve benefited from some of the trades that were made. This year, we do have a lot of (picks). We have the opportunity to maybe go up and get a guy.”

Replacing Yanda is almost impossible, so the Ravens can only seek to get a player who might develop into a star.

“You can hopefully replace him with another great player that can carve out their own destiny, carve out their own legacy. It’s going to take somebody that’s smart, that’s physical, loves the game,” said Ravens running back Mark Ingram, part of an attack last year that compiled a record-breaking 3,296 yards rushing.

Michigan’s Cesar Ruiz and Netane Muti of Fresno State are among the linemen who might be available for Baltimore in the first or second rounds.

The Ravens could use a linebacker or two, one to fill the middle and the other to help with a pass rush that ranked 21st with 37 sacks.

It becomes more of a priority if Baltimore can’t work out a long-term deal with Matthew Judon, who has been given the franchise tag.

Patrick Queen of LSU and A.J. Epenesa of Iowa are potential picks if DeCosta chooses to address the position early in the draft.

DeCosta’s first draft pick as Baltimore’s new GM last year was wide receiver Marquise “Hollywood” Brown from Oklahoma, who appears to be a gem. Now, DeCosta needs to find another speedy wideout to join the party.

Although the Ravens depend heavily on the run, it’s important for Jackson to have more than one receiver who can get downfield in a hurry.

“This happens to be a wide receiver class with a lot of really good players, and if we’re on the clock and we think that guy is the best player, we’ll probably pick him,” DeCosta said.