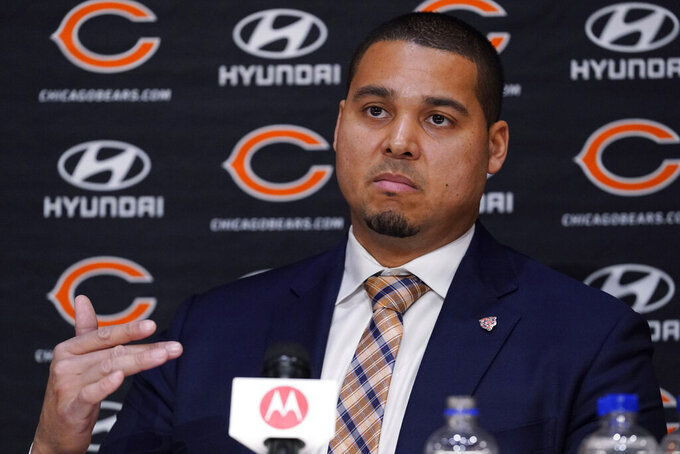 DALLAS (AP) — Ryan Poles knew pretty quickly he was interested in the path that led to his hiring as general manager of the Chicago Bears, while Dallas Cowboys personnel man Will McClay toiled in arena football before scouting beckoned.

Both credit relationships built along the way for their spots in a promising trend of diversity hiring for the NFL, plagued for years by a poor record in opportunities for minorities in the coaching ranks.

Poles is among six minorities picked to fill the past 12 openings for general managers going back to early 2021, and McClay could have pushed the ratio past 50%. Instead, he has turned down several chances to take that title, choosing to stay as vice president of player personnel for Dallas owner, president and GM Jerry Jones.

Relationships are crucial to maintaining or expanding the roles of minorities in front offices, and the effort is never-ending, said C. Keith Harrison, lead author of the annual NFL Diversity and Inclusion Report.

“People say time is money. Trust is money, and people invest in relationships that they trust,” said Harrison, a sports business professor at UCF. “We have data that when you network and connect, engage with people that are different from you by gender and race, you have a better chance of being what we call upwardly mobile.”

McClay says ownership, which is overwhelmingly white in the NFL, has a role in getting to know promising minority candidates in organizations. McClay was head coach of an arena league team owned by Jones' Cowboys before becoming a scout, and has been with the club for 20 years.

Poles was about to go into marketing after he was released by the Bears, but took a job as a graduate assistant at Boston College, his alma mater, instead. Conversations with visiting pro scouts sparked his interest in the personnel side.

“He’s always taken a lot of pride in making sure that there was a pipeline from scouting assistant to area pro scout to directors and then doing that the right way,” said Poles, who was with the Chiefs for 13 years before joining the Bears in January.

“So I was fortunate to have someone that was very aware of it, and my growth and development happened probably faster because of just mentors that wanted to spend time to develop me as a person and as a personnel person and a leader,” Poles said.

Five of the six recent minority additions among GMs are Black: Poles, Washington's Martin Mayhew, Kwesi Adofo-Mensah of Minnesota, Atlanta's Terry Fontenot and Brad Holmes in Detroit. Pittsburgh hired Omar Khan, an Indian American, in May. Overall, eight of the 32 GMs are minorities.

Fontenot, hired by the Falcons in early 2021 after 18 seasons in New Orleans under longtime GM Mickey Loomis, said the goal should be to get to a point where race doesn't have to be a factor for head coaches or personnel chiefs.

At its recent spring meetings in Atlanta, the league conducted an accelerator program for minorities in coaching and the front office, with two members of the staff from each club participating.

“The league shouldn’t have to have accelerator programs,” Fontenot said. “We should be able to do that with everyone — not just people that are a certain color, a certain race, a certain sex. We should be inclusive in all of our processes.”

While Harrison said he is optimistic about minorities having opportunities in some aspects of management with NFL teams, that feeling doesn't carry over to head coaching.

In a league with 70% of rosters filled by Black players, five head coaches are minorities. In 2011, that number was eight. Whether a better hiring record with GMs can translate to head coaching is a tricky question, Harrison and Poles said.

First, it's difficult to know how much influence a GM will have with an owner, Harrison said, adding that a Black GM in charge of hiring a coach might have stronger ties to white candidates.

“It’s hard to oversimplify,” Harrison said. “There’s only 32 teams. So our sample sizes, they’re so small and these positions are so challenging and elite to come by. They’re just so competitive.”

Jones of the Cowboys made a similar point, while also saying he wasn't inclined to give up his GM title to keep McClay because he believes the role goes well beyond personnel. Jones said he values McClay, who runs the draft for a club with plenty of recent success in picking players, and doesn't want to minimize his role.

McClay said he has stayed because he believes his voice is important to Jones, and he has direct contact with the owner/GM. McClay also said he doesn't feel pressure to take a job as a general manager elsewhere because he is Black.

“I’m a grown man,” the 55-year-old said. “You've got to do your job first, so I’m doing my job to the best of my availability first. Then, if that opportunity comes and I’m comfortable with it, then that’s what it is.”

The uptick in minority hiring of GMs in the NFL will be meaningful only if it continues, McClay said.

“It will make that much of a difference if you continue the practices that are now being used because it's a hot topic,” McClay said. “Instead of reacting to it, planning for it and giving people the opportunity based on the quality of their work more so than just saying, ‘OK, we did it this time.’ It’s got to continue because it’s not just something you can do right now and say it’s solved.”