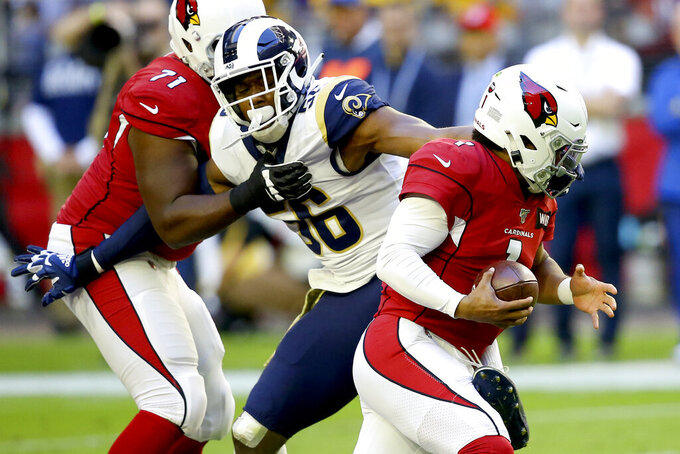 GLENDALE, Ariz. (AP) — Jared Goff bounced back from a rough November with one of his best games of the season, throwing for 424 yards and two touchdowns in the Rams’ dominant 34-7 win over the Arizona Cardinals on Sunday.

So does Arizona’s pass defense, which allowed another team to do anything it wanted through the air.

The Rams (7-5) followed an embarrassing 45-6 loss to the Baltimore Ravens on Monday night by embarrassing the Cardinals six days later to stay in the hunt for a playoff berth.

“It always will be and always has been about how you respond,” Goff said. “Our team responds well. It’s part of our mentality, part of our attitude, is that bad stuff happens, nobody’s perfect, but how do you respond?

“Today, we proved we were a strong team.”

Goff methodically picked apart the Cardinals defense, which was the NFL’s worst against the pass coming into the game. He had thrown no touchdowns passes and five interceptions over his previous three games but responded with 323 yards passing in the first half as the Rams built a 20-0 lead.

In the third quarter, Goff even showed his blocking ability, moving Cardinals cornerback Patrick Peterson aside to make room for Robert Woods, who cut across the field and ran for a 48-yard gain.

“He was great today,” Los Angeles coach Sean McVay said. “He distributed the ball and guys made some plays. It was a great game for Jared, but that was the game we expect from him. Those are the things we know he’s capable of. It’s always a collaboration of the unit, but I was really pleased with his ability to command and control the game.”

Los Angeles finished with 549 total yards, while Arizona had just 198 — and a big chunk of those came in the fourth quarter when the game was long decided.

“We just had a gameplan, everybody was flying around swarming to the ball,” Rams defensive tackle Aaron Donald said. “Everyone was making plays and consistent.”

The Cardinals (3-8-1) had an extra week to rest and prepare for the Rams after coming off their bye week but looked rusty instead of refreshed. They’ve lost five straight games.

This was easily the ugliest of the bunch, with the Cardinals looking overmatched in every aspect of the game.

“You can look at every phase, we didn’t do what we had to do,” Cardinals offensive lineman Justin Pugh said. “We have to take that one on the chin and be very critical on the film.”

Rookie Kyler Murray had arguably the worst game of his professional career, completing 19 of 34 passes for 163 yards. He threw a pick-6 midway through the third quarter when Taylor Rapp grabbed an easy interception and ran 31 yards for a 34-0 lead.

Murray showed up on the injury report late in the week with a hamstring issue and didn’t appear to have his usual mobility. He ran for a 15-yard touchdown in the fourth quarter but was sacked three times in the first half after he was unable to avoid pressure he often sidesteps.

David Johnson was a big part of the Cardinals’ offense during the first half of the season, emerging as a talented pass catcher to go with his usual running production.

But after missing a few weeks with an ankle injury, he’s nearly disappeared from Arizona’s offense.

The 2016 All-Pro had four carries for 15 yards and two catches for 9 yards on Sunday. Kenyan Drake got the bulk of the playing time at running back, running for 31 yards on 13 carries.

The Cardinals got a break early in the third quarter when Murray’s interception was overturned after an official review and switched to a pass interference call against the Rams.

Arizona couldn’t do anything with the possession, though, punting four plays later.

Cardinals: Defensive end Jonathan Bullard hurt a hamstring in the first half and didn’t return.

Rams: host the Seahawks next Sunday.

Cardinals: host the Steelers next Sunday.