Goff, Wentz have lived up to expectations so far since draft 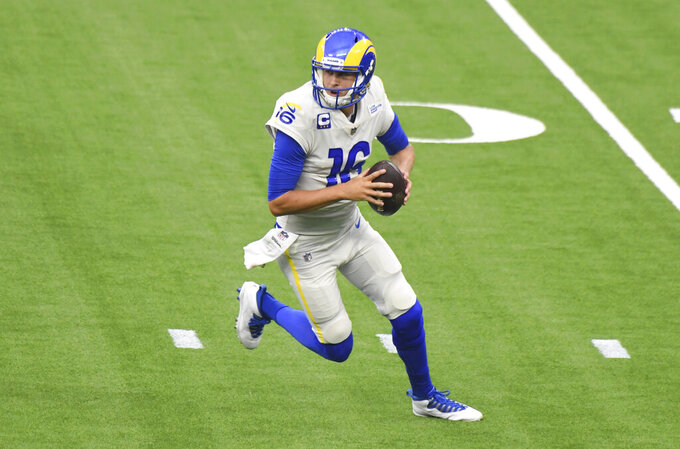 Quarterback Jared Goff (16) of the Los Angeles Rams prepares to pass against the Dallas Cowboys in the first half of a NFL football game on opening night at SoFi Stadium in Inglewood on Sunday, September 13, 2020. (Keith Birmingham/The Orange County Register via AP)

Two quarterbacks were selected Nos. 1-2 in the draft only seven times since 1967. It hasn't worked out for both teams until now.

Wentz finished third in NFL MVP voting his sophomore season when the Eagles won their first Super Bowl title, doing it without him after he tore two knee ligaments in his only other meeting against Goff and the Rams.

“I have a lot of respect for him as a player and a guy,” Wentz said of Goff. I enjoy playing against him.”

The Eagles traded up twice to get the second pick, hoping to get Wentz. They would’ve been happy with Goff, but it was known at the time he was going to the Rams.

“We liked Goff as well, and yet looking back and kind of thinking back on some of the conversations, just felt that Carson was the fit for us here in Philadelphia, his makeup, his chemistry, the style of play kind of fit what we were doing and that’s nothing against Jared Goff because he’s obviously had a great career so far,” Eagles coach Doug Pederson said. “It just made Carson a better fit for us at the time.”

Jim Plunkett and Archie Manning were picked 1-2 in 1971. Plunkett lasted only five seasons in New England but found success in Oakland where he led the Raiders to Super Bowl titles in the 1980 and 1983 seasons. Manning got stuck playing for the terrible Saints and won only 35 of his 139 career starts.

Peyton Manning and Ryan Leaf went 1-2 in 1998. Manning is heading to the Pro Football Hall of Fame and Leaf is among the all-time draft busts.

Andrew Luck and Robert Griffin III went 1-2 in 2012. Luck had an outstanding career before abruptly retiring before last season. Griffin started well, got injured, and is now a backup.

Jameis Winston and Marcus Mariota went 1-2 in 2015. Both are currently backups with other teams and Mariota is on injured reserve.

Things worked out much better for Rams and Eagles.

“Both guys have done an excellent job leading their franchises,” Rams coach Sean McVay said of Goff and Wentz.

The Eagles were missing three-time Pro Bowl right guard Brandon Brooks and three-time Pro Bowl right tackle Lane Johnson. Nate Herbig and rookie Jack Driscoll took their place and made their first career starts. Johnson is trending toward returning from an ankle injury this week. Herbig will remain in the lineup for Brooks, who tore an Achilles tendon in the offseason.

Running back Miles Sanders is expected to return for the Eagles after missing the opener with a hamstring injury. The run game couldn’t get going without Sanders, who led all rookies in scrimmage yards last season. The Eagles had 57 yards rushing on 17 carries against Washington.

The Rams have been a dominant road team during McVay’s tenure, winning each of their three openers in his tenure and going 20-8 in road and neutral site games, including playoff games. That dominance started to wane last season when Los Angeles lost its final two road games to drop to 5-4 away from the Coliseum, but McVay has still only lost to one road opponent with a losing record in three years.

The Rams replaced Todd Gurley with three running backs. Veteran Malcolm Brown got most of the workload against Dallas, running for 79 yards and two touchdowns. But McVay went into the game expecting to give more playing time to rookie Cam Akers, who started and ran for 39 yards. McVay is likely to give more work to Akers and second-year pro Darrell Henderson against the Eagles, but Brown could lead the way again if he remains effective.