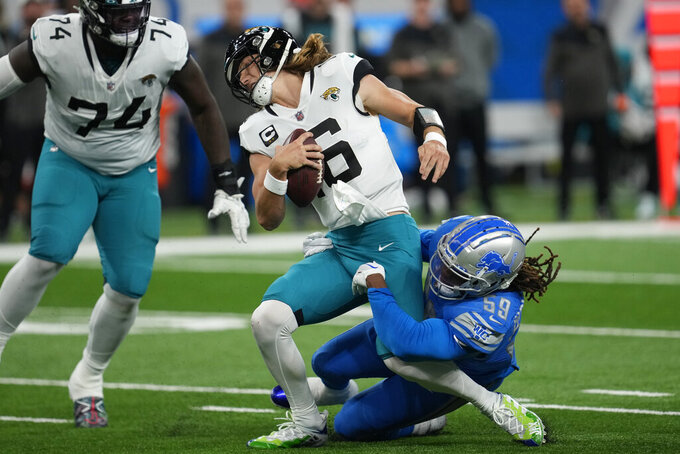 DETROIT (AP) — The Detroit Lions were so dominant on offense that they didn't punt.

Detroit's defense was pretty good, too.

Jamaal Williams ran for his 14th touchdown early in the first quarter to help the Lions get off to a strong start and they did not slow down in a 40-14 rout of the Jacksonville Jaguars on Sunday.

“This was a big win for us because I feel like this is the game that can catapult us through December," coach Dan Campbell said.

The Lions (5-7) scored on all five of their drives in the first half to take a 17-point lead, and their first three possessions of the second half to pull away.

“That was as complete a team win as I’ve ever been part of," quarterback Jared Goff said.

The Jaguars (4-8) had a scare on the last play of the second quarter when quarterback Trevor Lawrence was sacked and grabbed his left knee, but their defense made his return moot.

Lawrence, coming off the best performance of his two-year career, was 17 of 31 for 179 yards with a touchdown for an offense that was just 3 of 12 on third down. He was taken out late in the fourth quarter with his team trailing by 26 points.

“It was an ugly day for us, for sure,” Lawrence said. “It’s just embarrassing for us for what we put out there.”

Goff, meanwhile, had one of his best games by completing 31 of 41 passes for 340 yards and two touchdowns.

“Our quarterback played as good as you can play," Campbell said.

Amon-Ra St. Brown had 11 receptions for 114 yards and two touchdowns while Williams and D'Andre Swift combined for 97 yards rushing and two scores for the Lions.

Jacksonville's Travis Etienne, who was limited to 54 yards rushing, lost a fumble early in the game and Williams scored on a 1-yard touchdown run seven snaps later.

“We were kind of shocked to start the game," coach Doug Pederson said. “We were not ready."

Detroit is unlikely to catch the NFC North-leading Minnesota Vikings, but is still in the playoff race as a wild-card contender.

“It feels good to have that as a whisper because you know what this team and this city have been through," said receiver DJ Chark, who set season highs with five catches for 98 yards against his former team.

Jacksonville lost a 20th consecutive game to an NFC team, extending its NFL cross conference-record losing streak. The Jaguars have not won an NFC game since beating the New York Giants 20-15 in the 2018 season opener.

Lions rookie receiver Jameson Williams played for the first time since suiting up for Alabama in college football's championship game and injuring his left knee. Williams, drafted No. 12 overall, drew a roar from the crowd when he jogged on the field for Detroit's second snap and again late in the first half.

Goff threw a pass to Williams late in the third quarter that fell incomplete and the crowd wanted more, chanting, “We want Ja-mo!” in the fourth.

“This was just a primer for him to get his legs under him," Campbell said.

TOP OF THE CLASS

Jacksonville linebacker Travon Walker, the No. 1 pick overall, had five tackles. Detroit defensive end Aidan Hutchinson, selected second overall, had two tackles and was credited with half a sack to give him a total of six this season.

Jaguars: LB Chad Muma (ankle) was hurt during the game and starting FS Andre Cisco (shoulder) was inactive after being listed as questionable.

Lions: DE Romeo Okwara, who tore his Achilles tendon 14 months ago, was inactive in the first game he was eligible to play this season.

“It's the healthiest we’ve been and there’s a good chance we can get Romeo back next week," Campbell said.

Jaguars: Play at Tennessee on Sunday.

Lions: Host the Vikings on Sunday.