Goff's clunker in Miami might show limits of Rams' ambitions 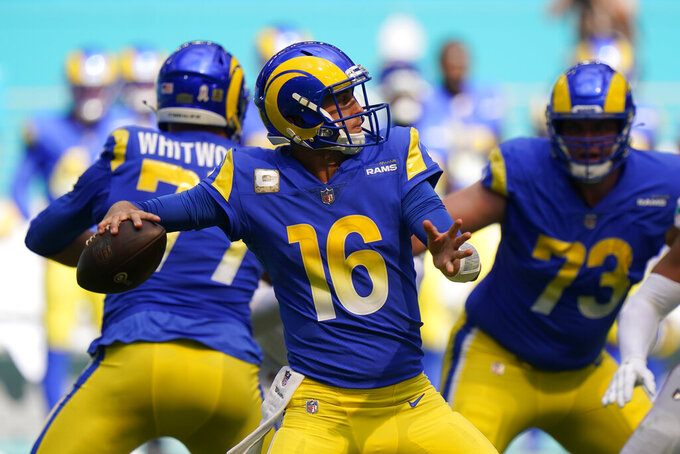 The Rams (5-3) began their bye week sifting through their stack of mistakes from a 28-17 loss at Miami in which Goff's 355 yards passing meant much less than his two interceptions and two costly fumbles.

“In a lot of instances (this season), he's done some really good stuff,” Rams coach Sean McVay said Monday night. “But some of the tougher plays that we had yesterday were really tough. ... Overall, there's been some good, and there's been some things I expect him to be better with. I think that's a reflection of the whole operation offensively, but in some of those situations, I expect that we'll see growth."

Although Goff's inability to stay consistent is a reflection of the Rams' overall offensive flaws and McVay's misadventures as a play caller, Goff realizes a large part of the Rams' success rests on his rangy shoulders.

If Los Angeles intends to be more than a fringe NFC playoff contender this season, Goff likely must step up to a level he has reached only intermittently in his career.

“Not even close to good enough on my part, and throughout the whole game,” Goff said. “Just need to be better. Got to be better. I will be.”

The Rams are hitting their bye week at the midway point of a season featuring several solid wins and potential, but also ample reason to doubt Los Angeles’ credentials as a Super Bowl contender. Goff’s play reflects most of those concerns.

Goff committed his four turnovers all in the first half in Miami, matching his career high for an entire game. The Rams trailed 28-7 after that wave of mistakes, yet still had plenty of time to catch up.

They couldn't, managing 10 points from 307 yards of offense after that. The Rams had 92 offensive snaps — the franchise's most since 2005 — and outgained the Dolphins by 326 yards, but trailed by double digits for the final 38 minutes.

Goff wasn’t to blame for everything, of course. His offensive line, so good earlier this year, made errors both in pass protection and in the running game. A handful of drops — including a crucial, blatant mistake by tight end Gerald Everett late — impeded the Rams’ rally.

It added up to a comfortable win for Miami even while getting shut out by Los Angeles' defense in the second half.

“Our defense played really well and gave us all the opportunities we needed,” Goff said. “It starts with me, and I've got to be a whole lot better.”

The defense looks great. Coordinator Brandon Staley's unit has held four of its last five opponents under 300 yards and two under 150 after limiting the Dolphins to 145. The defense also hasn’t allowed a second-half touchdown in five consecutive games. It’s clear which side of the ball isn’t doing its share lately.

Goff's performances are often a reflection of McVay's effectiveness as a play caller, and the Rams' offensive mastermind was off. McVay threw the ball 61 times against one of the NFL’s best pass defenses, repeatedly hesitating to trust his solid ground game against the Dolphins’ less-impressive run defense. Sure, the Rams fell behind and needed to catch up — but 32 of those 61 passes were thrown before halftime.

Safety Taylor Rapp is playing his way back into prominence. After getting hurt in training camp and losing his job to rookie Jordan Fuller, Rapp has capitalized on Fuller's injury absence. After a key interception last week against Chicago, Rapp's strong game in Miami included a forced fumble in the second quarter.

New special teams coordinator John Bonamego's units gave up an 88-yard TD punt return. New kicker Kai Forbath made his extra points and a 23-yard field goal, but he also had a comically bad miss on a late 48-yard attempt that would have trimmed the Rams' deficit to one score. Not a confidence-inspiring performance, but McVay is sticking with Forbath.

CB Jalen Ramsey fell ill Sunday morning and didn't play. McVay didn't provide details, citing privacy concerns, but said the $105 million cornerback was feeling much better Monday at the Rams' training complex. ... RB Darrell Henderson got off to a strong start, but couldn't finish the game due to a thigh injury. Henderson's quadriceps likely would have kept him out of early practices this week if the Rams didn't have a bye, but McVay doesn't expect the injury to linger into next week.

21 — The number of Goff's passes intended for receiver Cooper Kupp, who caught 11 for 110 yards. That's the most targets for any NFL player since 2015.

The bye week won't be relaxing for the Rams with tougher matchups awaiting. They host powerhouse Seattle on Nov. 15, followed by a fifth trip to the East Coast this season to face Tampa Bay.