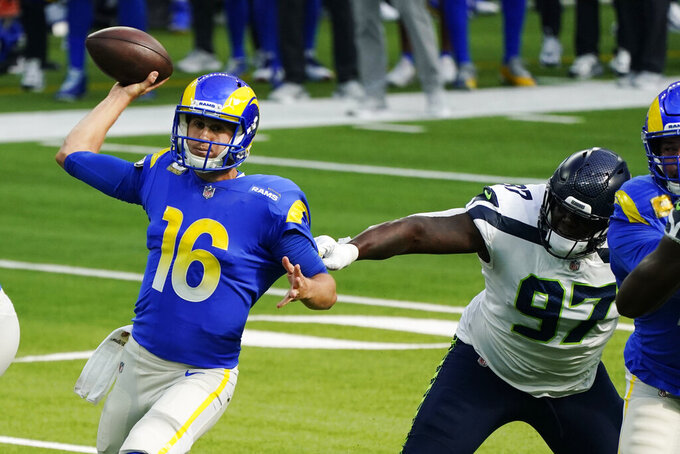 The Rams and their increasingly dominant defense have never come much closer than they did Sunday during a win that propelled Los Angeles into a share of the NFC West lead.

Darious Williams made two interceptions, Jared Goff passed for 302 yards and the Rams moved alongside Seattle and Arizona atop the division with a 23-16 victory over the Seahawks.

Williams, Leonard Floyd and the Rams' elite defense did some of its best work yet against Wilson and the NFL’s highest-scoring team, holding Seattle to three points after halftime.

Whenever Wilson and Seattle got into position to do something big over the final three quarters, Los Angeles (6-3) stopped them in a seven-point win that didn’t feel nearly that close.

Los Angeles sacked Wilson six times — three by Floyd. The Rams made three takeaways in LA territory, intercepting two of Wilson's passes and recovering his only fumble — also by Floyd.

“We can cause a lot of stress on a quarterback,” Floyd said. “We were rushing great as a unit and waiting on the quarterback to make a mistake.”

“We knew it was going to be a challenge, but it’s what we live for,” said Rams cornerback Jalen Ramsey after holding DK Metcalf, the NFL's second-leading receiver, to two catches for 28 yards.

Wilson has committed 10 combined turnovers in Seattle’s three losses, and he couldn't engineer a touchdown drive against the Rams in the final 54 minutes.

“I've just got to get better,” Wilson said. "I’m not going to make it overly complicated. It’s not on anybody but me, and I put it on my shoulders to get it fixed.”

Rams coach Sean McVay praised both defensive coordinator Brandon Staley’s halftime adjustments and his players’ implementation of them. Seattle couldn’t crack the Rams’ defense, which has allowed just two touchdowns — none since Week 3 — and 29 total points in the second half all season long.

“This is a great offense, (and Wilson is) someone that we have a tremendous amount of respect for, but our defense has been stout all year,” McVay said.

Malcolm Brown rushed for two touchdowns and Darrell Henderson had another score as the Rams returned from their bye week to win for the fifth time in the rivals' past six meetings.

Williams, the Rams' rising star at cornerback opposite Jalen Ramsey, made an end zone interception in the first half and a spectacular third-down pick near midfield with 7:48 to play. Floyd sacked Wilson thrice and also recovered Wilson's fumble on a snap early in the fourth quarter in Rams territory.

Alex Collins rushed for his first touchdown since 2018 for the injury-riddled Seahawks.

“We played a terrible game again, and that didn’t work out for us,” Seattle coach Pete Carroll said. “With all the emphasis that we have on (not) to turn the ball over, seven times in the last two weeks is just — I don’t even recognize that kind of execution where we’re giving the ball up.”

Los Angeles’ solid performance was dampened by the loss of stalwart left tackle Andrew Whitworth to a knee injury late in the first half. Whitworth, a 15-year NFL veteran, was taken off the field on a cart.

Rebounding from a four-turnover performance in Miami before the Rams' bye week, Goff capitalized on the chance to play against the NFL's worst pass defense in the first NFC West game at SoFi Stadium, where the Rams improved to 4-0.

Goff went 27 for 37 and threw frequently to Josh Reynolds, who had career highs of eight catches for 94 yards.

Jason Myers kicked three field goals for Seattle, including a 61-yarder at the halftime gun. Myers made his third field goal with 25 seconds to play, but Robert Woods easily recovered the onside kick.

Seahawks: Adams went to the locker room after the opening drive with a shoulder injury, but returned shortly afterward. ... RB Travis Homer injured his hand.

Rams: Whitworth had played every snap this season and 99% of last season's snaps for the Rams. The 38-year-old former Bengals Pro Bowler hasn't missed a game due to injury since 2013. ... S Taylor Rapp injured his knee in the first half and didn't return. ... K Kai Forbath injured his ankle in the third quarter, during which he missed an extra point.

Seahawks: A quick turnaround to face the Arizona Cardinals at home on Thursday night.

Rams: Their fifth trip to the East Coast this season to face the Tampa Bay Buccaneers on Monday, Nov. 23.