Going for it: Saints could clinch 1st-round bye 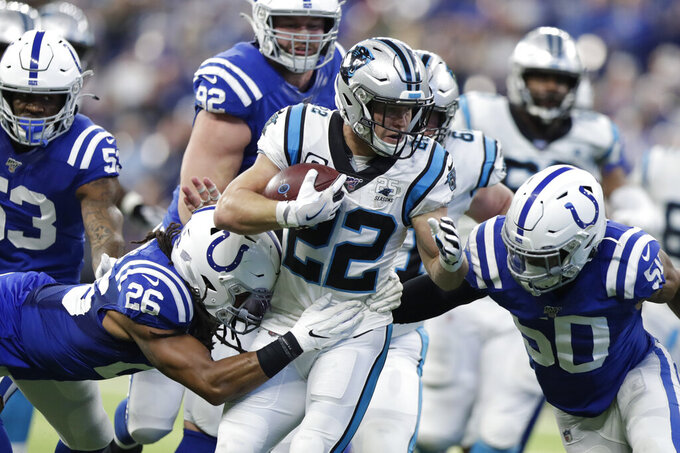 Carolina Panthers' Christian McCaffrey (22) is tackled by Indianapolis Colts' Clayton Geathers (26) and Anthony Walker (50) during the first half of an NFL football game, Sunday, Dec. 22, 2019, in Indianapolis. (AP Photo/Michael Conroy)

CHARLOTTE, N.C. (AP) — Don't tell Sean Payton the Saints' chances of earning a first-round bye in the NFC playoffs are a long shot.

New Orleans' 13th-year coach said his team if preparing to go all out Sunday to beat the Carolina Panthers in the regular-season finale, knowing full well his team still needs some help to earn a bye. That means Payton is planning to play New Orleans' most prominent players as he normally would.

“I don't think this is a long shot, what we need (to happen) this week,” Payton said, referring to the possibility of a loss or tie by either San Francisco or Green Bay. "We’re full speed ahead, winning this game.”

The Saints (12-3) are already NFC South champs for a third straight season and cannot finish any lower than the third seed. But New Orleans wants a first-round bye and could get it with a win, combined with a failure to win by either the Packers, who visit Detroit, or 49ers, who visit Seattle in what also will decide the NFC West champ.

Drew Brees said the Saints view the possibility of a bye as important not only because it would secure a home game in the second round of the playoffs, but also because "you just don't have to play an additional game and have the exposure from that.”

“You would hate to lose somebody by having to play another game” in the playoffs, Brees continued. “Getting that week rest, I feel like, is a huge benefit.”

The Saints even could earn the No. 1 overall seed in the NFC, but that would require a win over Carolina and losses or ties by both the 49ers and Packers.

Last year, the Saints couldn't improve their playoff position in Week 17, rested key players and lost at home to a Carolina team that had dropped seven straight games.

"We’re treating it much differently than maybe a year ago when we kind of knew where we were,” Payton said.

If the Saints lose, they still could get the No. 2 seed, but only if Green Bay wins and San Francisco loses.

The Panthers enter Sunday's game on yet another seven-game skid. Carolina (5-10) doesn't have much to play for other than helping Christian McCaffrey become the third running back in NFL history to post 1,000 yards rushing and receiving in the same season. McCaffrey enters the game needing 67 yards receiving to join Roger Craig and Marshall Faulk in that elite club.

Offensive coordinator Scott Turner is well aware of the record and has said he will try to get McCaffrey there during the natural flow of the game. The Panthers aren't planning on taking McCaffrey out early because they're out of the playoff hunt.

"One of the ways we have been most effective is by getting Christian the ball," Turner said.

The Saints have had to revamp personnel in their secondary during the past couple weeks because of injuries to safeties Vonn Bell, Marcus Williams and Saquan Hampton, as well as cornerback Eli Apple. New Orleans moved quickly to claim Janoris Jenkins off waivers after he was cut loose by the New York Giants, and Jenkins saw significant action in Tennessee last week after Apple hurt his ankle.

“The plan was to have him ready in the sub, to be able to play either outside or inside, depending on our coverage call,” Payton said. “He ended up playing more and more snaps. But overall, good.”

Saints players who take part in the passing game sound in awe of what receiver Michael Thomas has accomplished. With 145 catches, he enters the regular season finale having already broken Marvin Harrison’s 2002 record of 143 catches in a single season.

“That’s insane. To have 145 receptions for me would probably take about 2 1-2, three seasons,” tight end Jared Cook said. “It is something I might not ever see again in his lifetime and a lot of people will not. He still has another game to continue balling out to extend that record.”

Thomas also leads the NFL with 1,688 yards receiving this season, leaving him 112 yards shy of becoming the fifth player in NFL history to hit the 1,800-yard mark. In nine games this season, Thomas has had 112 or more yards receiving, including 128 or more in each of his last three games. However, he has been listed as limited in practice this week with a hand injury.

The Saints are facing a Carolina team that looks different than the last time they played in Week 12. Not only has coach Ron Rivera since been fired, but the Saints will also see a different QB in Panthers rookie Will Grier after facing Kyle Allen in the last meeting.

“They're not going to change schematically what they do offensively this late” in the season, Klein said. “And what they do, we can’t control. All we can control is our defense and just be ready to play a game that we know is going to be hard-fought and physical. We can't be chasing ghosts. We just have to focus on us.”

The Panthers are expected to be without No. 1 wide receiver D.J. Moore, who suffered a concussion last week and remains in the league's protocol. Moore had six catches for 126 yards and two touchdowns in the previous meeting with the Saints and was averaging more than 100 yards receiving per game over the previous seven before the injury. Moore's injury means Chris Hogan or Brandon Zylstra will likely get the start. Moore's production will be difficult to replicate.

“It's going to be a group effort,” Turner said. “People have to pick up the slack.”

This is a good week for the Saints to get right in the running game. The Panthers have been a complete fiasco against the run, allowing 145.4 yards per game on the ground and league-high 29 touchdowns rushing.

“We just didn't do what we were supposed to do this year,” Kuechly said. “We talked about it in meetings. Coaches have prepared us and we didn't do a good enough job of of doing our jobs. The run game is simple. It's not super complicated."