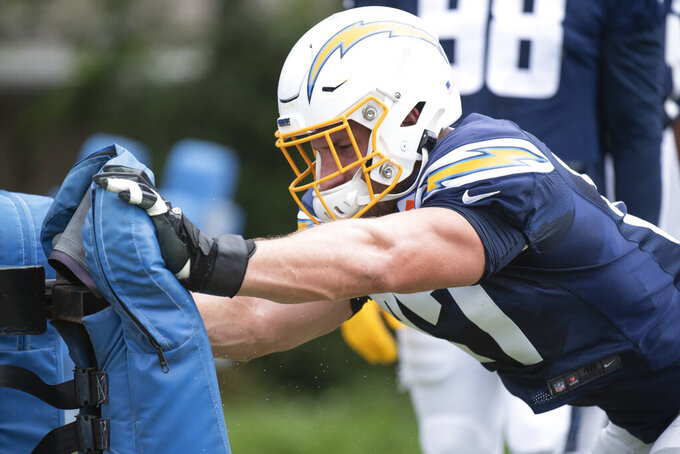 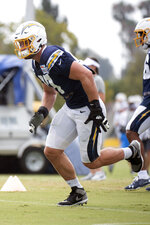 COSTA MESA, Calif. (AP) — Joey Bosa still winces when he sees video of the way he played last season, and it's not because of any lingering pain in his left foot.

The Los Angeles Chargers' star pass rusher seriously bruised his foot in training camp, and he didn't fully heal until the regular season already was half over. When Bosa finally got back on the field with seven games left, he could still contribute to the 12-4 Chargers — but he usually wasn't the game-changing force that made him one of the NFL's elite defensive players over his first two seasons.

To Bosa, merely being good is a huge letdown. He doesn't plan to let it happen again.

"I don't like watching film from last year," Bosa said. "It wasn't me. I (didn't) have the same power, the same strength. It's not excuses, it is what it is. It's a fresh slate this year. I just want to put that behind me, what happened last year. I'm in a much better place this year, knock on wood, and I hope I continue to stay healthy. I just want to continue improving."

Bosa's bone bruise lingered for many weeks, preventing him from doing nearly every athletic feat that makes him better than most defensive linemen. His explosive first step wasn't always there, and he ended up with just 5 ½ sacks in the regular season, along with one more in the Bolts' two playoff games. He had just one tackle in Los Angeles' playoff loss at New England.

Bosa still managed to avoid season-ending surgery on his foot, which put him in position to go through a normal offseason. He reported to camp last week fully healthy, and he has hit the turf in top form.

"I stay the same speed, and I could feel other guys slowing down," he said with a grin. "So it's fun out there."

The Chargers lost absolutely no faith in Bosa during his injury-plagued season, picking up his fifth-year contract option last April. He is still a pillar of their plans on defense, teaming with Melvin Ingram in one of the NFL's most dynamic pass-rushing tandems.

"He's a professional," coach Anthony Lynn said of Bosa. "He takes care of himself. He watches what he eats. He comes in here and he's one of the guys in the best shape. I don't have to worry about Joey in that respect."

Bosa was the NFL's defensive rookie of the year in San Diego in 2016 despite missing the first four weeks of the season with a hamstring injury. Bosa and Ingram were dominant in 2017, when Bosa announced his arrival in Los Angeles with his relocated team by racking up 12 ½ sacks and 70 tackles, earning his first Pro Bowl selection.

Bosa is eager to continue his climb to the next level of his career, but he doesn't plan on complete continuity: He will have a new uniform number this fall after switching from 99 to 97 in the offseason.

"It definitely makes you grateful for the time you have out here," Bosa said. "I don't know if it makes me a better player that I have a messed-up foot — it's not messed up, but you know what I mean. Going through that, no, I think I would have had an unbelievable year last year, and I would have added on this year."

Bosa is also driven by the arrival of his brother, Nick, with the San Francisco 49ers, who grabbed him with the second overall pick.

"I'm sure I'm going to get some film sent over Snapchat here pretty soon," Joey Bosa said after Nick's first camp practice with the Niners. "It's so cool that we're going through it at the same time, and he's feeling healthy, which is what is important right now. It was nice to be able to train this year (together), just push each other in that aspect."

After his first few practices in Costa Mesa, Joey Bosa said he could feel "the soreness definitely kicking in." He quickly amended his thoughts to say he was just feeling general practice soreness, not in his foot.

"My foot is feeling great," he said. "It actually has gone down so much, I hardly even think about it these days."