Gordon not ready to relinquish star running role in Denver 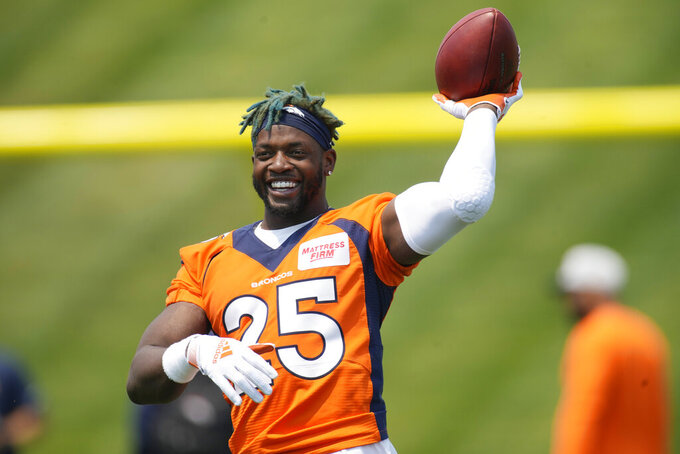 Despite skipping the Broncos' OTAs after returning to Denver on a one-year, $2.5 million contract this spring, Gordon said at mandatory minicamp this week he won't abdicate his starting job to second-year running back Javonte Williams.

Williams ran for 903 yards on the same amount of carries as Gordon had — 203 — and rushed for four TDs to go with his 43 catches for 316 yards and three scores.

Williams started one game as a rookie and Gordon started the others.

Gordon isn't among those who expect that to flip in 2022, and he said he told general manger George Paton as much when he signed his incentive-laden deal on April 30.

“I told George when I was at the table, ‘I’m not going to lay down, man,’" Gordon recounted. "I’ve always had that mindset that I have to go get it and that they’re bringing someone in here to take your job.

“I know a lot of people are wanting me to take a backseat. I get it. It’s been like that for a while," added Gordon. “It was like that when I was with the Chargers. Everyone wanted Austin (Ekeler) to start. I just come out here and do my thing.”

When his presence is required, that is.

Before Monday, the only time Gordon was at Broncos headquarters this offseason was when he flew to Denver to sign his deal, pick up his playbook and meet new head coach Nathaniel Hackett.

“I spent like three hours going over the playbook then. I think Coach Hackett did a good job of explaining the plays, play by play, what each guy has," Gordon said. “It’s kind of hard when you’re trying to self-teach yourself. You miss out on some small details that I was trying to pick up (Monday), actually being out there.”

Then, it was back to working out on his own while Williams participated in the team's offseason program, building chemistry with new QB Russell Wilson.

Not even last week when he returned to Denver and took part in a charity batting practice event with some teammates at Coors Field. But Gordon said he did meet with Wilson, his former teammate at Wisconsin.

"I was here all last week, doing some things with Russ and kind of bonding with the guys a little bit,” Gordon said. “But it felt good to be back out here. It’s been a while since I played some football and made some cuts like that.”

On a broiling first day of minicamp — which Hackett cut from three days to two — Gordon got snaps behind backups Mike Boone and Damarea Crockett.

What he's looking forward to is competing this summer with Williams.

“The goal is to make them want to play me,” Gordon said. "I know we’re going to do our thing — me and Vonte are going to do it. I don’t really know how we’re going to do the reps and things like that. The goal right now is to really master the playbook and let things play out. I’m definitely going to be ready to battle. That’s what it is. It’s going to make us better. It did last year.

“I’m going to continue to do that. I don’t care how old people think I’m getting. I feel good. I’ve been sharing the ball since I’ve gotten in the league with running backs, so this is nothing new,” said Gordon, who turned 29 in April.

"I’ve been battling for a while. I think Austin Ekeler is one hell of a back, and I had to battle with him and do the same thing. It’s just my luck, man. I just happen to be paired up with some great backs — fortunately and unfortunately, I would say.”