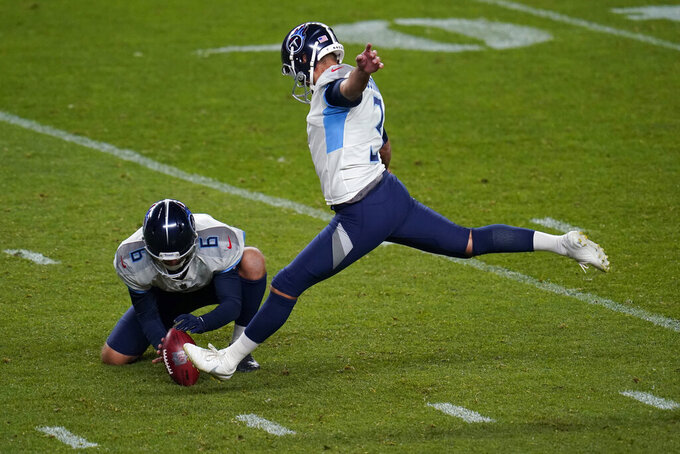 The Titans escaped Denver with a 16-14 victory Monday night on Gostkowski’s 25-yard field goal with 17 seconds left after he’d missed four kicks, one in each quarter.

Titans coach Mike Vrabel said he had no qualms about sending Gostkowski out for the game-winner.

“Nope. and they did, obviously, because they weren’t using their timeouts and they were banking on him missing," Vrabel said. "And we all got to do our job. And again, it’s not on just one player. We’ll get this stuff fixed. We got a lot of faith in our players. Excited to get out of here with a win. This is a tough place to play.”

Gostkowski missed three field goals: one wide left, another wide right and then a block, and he missed an extra point that loomed large until he atoned for his awful night at the very end.

“You can’t expect him to miss them all,” said Broncos defender Jurrell Casey, who was traded from Tennessee in the offseason.

Gostkowski never missed three field goals in a game during his 14 seasons in New England, where he won three Super Bowl rings, made four Pro Bowls and left this offseason as the Patriots’ all-time leading scorer.

On Thursday he joined the Titans, who had the worst field goal unit in the NFL last year when their first four kickers combined to connect on only 44.4% of field goals (8 for 18).

Although the final result was to his liking, surely his debut wasn’t.

Gostkowski, who had made 87.4% of his kicks coming into the game, a percentage that ranked fifth-best in NFL history, missed a 47-yarder in the first quarter and Shelby Harris blocked his 43-yarder just before halftime. Gostkowski's 42-yarder in the third quarter was wide left and he missed the PAT following Tennessee’s go-ahead touchdown on Jonnu Smith’s catch from Ryan Tannehill on fourth-and-1 with 13:49 remaining.

Denver replied with a 75-yard drive, with Melvin Gordon taking it in from a yard out, and Brandon McManus’ extra point put the Broncos up 14-13 with 9 minutes left.

The Broncos punted on their next two possessions and the Titans made them pay with a 12-play, 83-yard, game-winning scoring drive.

The teams scuffled to a 7-all tie after an eventful first half that included an ejection, a goal-line stand and Gostkowski’s dismal debut four days after signing with the Titans. The 36-year-old Gostkowski left New England with 1,775 points over 204 games.

Drew Lock threw a 9-yard touchdown pass to Noah Fant after Gostkowski’s first miss, and the Titans tied it on Tannehill’s 1-yard strike to MyCole Pruitt after a Denver turnover.

Gordon, who signed a two-year, $16 million deal in free agency, coughed up the ball at the Denver 23 on a hard hit by safety Kevin Byard, who leads the league with 17 interceptions since 2017 but had never forced a fumble. Jeffrey Simmons recovered for Tennessee.

The Broncos failed to punch it in on three tries from the Titans 1 in the second quarter. Lock overthrew a wide-open Nick Vannett, Gordon was stuffed for no gain and Lock’s shovel pass to Jake Butt came up a yard short of the goal line.

Butt was on the receiving end of Rashaan Evans’ punch that got the Titans linebacker ejected.

There were no paying spectators but about 500 guests of players and coaches were in the stands as a sort of trial run for the Broncos’ next home game, against Tom Brady and Tampa Bay in two weeks, when 5,700 fans will be allowed into the 70,000-seat Empower Field at Mile High.

INJURIES: Titans CB Jonathan Joseph left in the first half with an arm injury but returned.

Broncos RB Phillip Lindsay (foot) and CB A.J. Bouye (shoulder) both went out in the first half and didn’t return.

Over the weekend, Broncos coach Vic Fangio said the only way wide receiver Courtland Sutton would play after spraining his right AC joint in practice was “to pass the most primitive test there is. ... If he can do 10 jumping jacks, he can play.”

But at least the Broncos didn’t lose their best offensive player for an extended period of time 48 hours after losing star linebacker Von Miller to a dislodged ankle tendon that required surgery and is expected to sideline him all season.

The Titans lined up at the south goal line and the Broncos lined up at their 30-yard line while Alicia Keys’ rendition of “Lift Every Voice and Sing” was played on the scoreboard above the south end zone. The players retreated to the tunnels. They lined up in front of their benches for the “Star Spangled Banner,” and about a dozen players from each team took a knee during the national anthem.

Titans open at home against Jacksconville on Sunday without fans in the stands.

Broncos visit the Steelers on Sunday without any spectators in the seats.