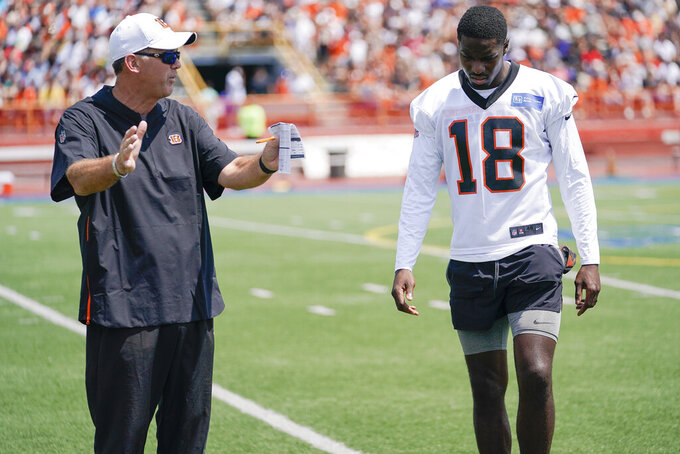 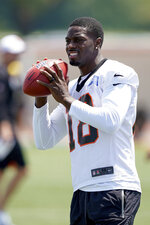 CINCINNATI (AP) — A.J. Green had ankle surgery Tuesday and is expected to miss the start of the season, another significant setback for the Cincinnati Bengals' offense.

Green hurt his left ankle during the opening practice of camp Saturday in Dayton, landing awkwardly after cornerback Dre Kirkpatrick bumped into the star receiver while breaking up a pass.

Coach Zac Taylor said Green had surgery Tuesday morning and likely won't be ready for the start of the season. Cincinnati opens at Seattle on Sept. 8 and then hosts San Francisco. The Bengals visit Buffalo the third week followed by a Monday night game at Pittsburgh on Sept. 30.

"He's going to miss some regular-season games," Taylor said. "How many, I don't know. Very hopefully he's back at the beginning of the regular season and it's not more than a couple of games."

It's the second straight season that Green has suffered a significant injury. He missed half of last season with an injured right toe that required surgery. The Bengals went easy with him during offseason workouts, and he felt fully recovered for the start of training camp.

Less than an hour into the first practice, he got hurt. The Bengals were practicing in Dayton — commemorating the site of the NFL's first game — when Kirkpatrick bumped into him during a 7-on-7 drill.

The Bengals initially were optimistic that it was just a sprained ankle, but a specialist recommended surgery to help the healing process.

"We're thankful they saw everything they saw, and it's just going to be a couple of games and we're going to get it all taken care of," Taylor said.

The offense already has lost three projected starters. Rookie tackle Jonah Williams suffered a season-ending shoulder injury in the offseason, and left guard Clint Boling retired in July because of a blood clot, costing Cincinnati its two starters on the left side of the line.

Taylor planned to have the team's first practice in pads on Tuesday, but severe storms forced the Bengals to call it off and have a walk-through indoors instead. Cincinnati is the only northern team without a covered practice field.

Taylor replaced Marvin Lewis, who was fired after his 16th season. Taylor said "there's never a good time to lose a practice," which forces the team to reconfigure its plans.

"When practice is canceled, when guys get hurt, it's all about how we respond," Taylor said.

NOTES: The Bengals signed free agent cornerback Tony Lippett, who was a fifth-round pick of the Dolphins in 2015. He spent two seasons with Miami and part of last season with the Giants. The team waived linebacker Chris Worley, who played in their final two games last season on special teams. ... Long snapper Clark Harris passed a physical and was cleared to join practice, before the storm forced Taylor to call it off.