Griffin focuses on winning in 1st start at QB since 2016 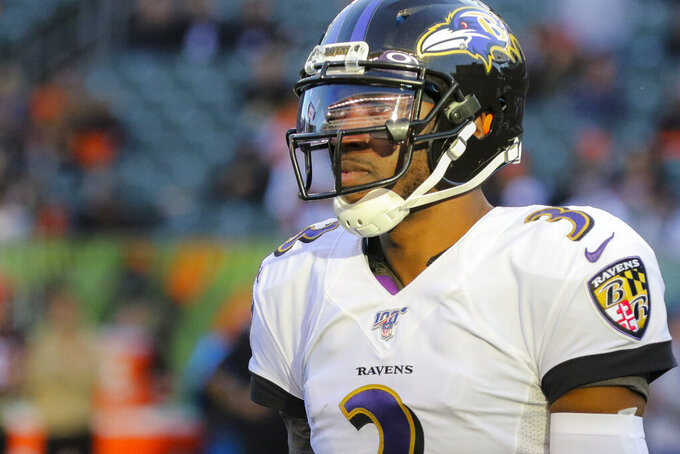 FILE - In this Nov. 10, 2019, file photo Baltimore Ravens quarterback Robert Griffin III walks off the field during the second half of NFL football game against the Cincinnati Bengals in Cincinnati. It will be Griffin's first NFL start since 2016 on Sunday, Dec. 29. (AP Photo/Gary Landers, File)

OWINGS MILLS, Md. (AP) — The previous time Robert Griffin III started a game in the NFL, he was protecting a broken shoulder while flinging the ball for a miserable Cleveland Browns team staggering through a 1-15 season in 2016.

On Sunday, Griffin returns to a role he's coveted since that lamentable year. RG3 will start at quarterback for the Baltimore Ravens, who have already sewed up the top seed in the AFC playoffs and have designs of ending the regular season with a 12-game winning streak and a 14-2 record.

Griffin will open against Pittsburgh because potential NFL MVP Lamar Jackson is being held out of a game that is essentially meaningless to the Ravens. Though Griffin has been a backup in Baltimore since the outset of the 2018 season, he still believes he's got enough drive, talent and leadership skills to be a starting quarterback in the NFL.

This would seem to be the perfect time for him to prove it. But that's not what motivates RG3 in his return to the spotlight that shined upon him so brightly when he won the Heisman Trophy at Baylor in 2011 and earned the NFL Offensive Rookie of the Year Award with the Redskins in 2012.

“I'm not going to make the game about me. I know everyone wants to,” Griffin said Tuesday. “I'm not really focusing on this being a stepping-stone game. It's not really about that. It's about going out and trying to win."

Now 29, Griffin appreciates having a job in the NFL after what he's been through. He enjoyed great success during his first two years in Washington, then struggled through an injury-riddled 2014 season. A concussion in the second preseason game of 2015 dropped him to third on the depth chart, and he did not take a snap the entire year.

He was cut in March 2016 and signed two weeks later by the Browns.

Griffin began his only season with Cleveland as a starter but hurt his shoulder in Week 1 and languished on the injured list until December. He led the Browns to their only win against San Diego on Christmas Eve.

Griffin was dumped in March 2017 and sat out the entire 2017 season. He returned to the NFL last year when the Ravens signed him to be the backup to Joe Flacco and a mentor to Jackson, then a 21-year-old rookie.

Looking back, Griffin knows he made the right choice.

“Obviously, any quarterback in my position is going to want to get back in the league and be starting right away," he said. “So I don't think in that sense it was ideal, but that was the hand I was dealt and I knew that coming here. It was an ideal situation because I was coming to an organization that has an identity, takes care of their players and allows you to be yourself. That's something that I was fighting a lot in previous stops.”

Because Griffin made a name for himself as a running quarterback at Baylor and with the Redskins, he has been a perfect tutor for the fleet-footed Jackson, whose running ability helped earn him the 2016 Heisman at Louisville.

Mostly, though, the Ravens got Griffin because his experience, right arm and ability to scramble out of the pocket.

“Robert has bought into the Baltimore Ravens. He’s bought into this offense," coach John Harbaugh said. “He’s bought into what I’m selling in the room, and he is all-in. He’s been there, done that. He knows his role, and it’s very defined and very clear to him what his role is.”

Griffin played three games as a backup last year. He's appeared in six games this season, either in a mop-up role or as part of what the Ravens call “The Heisman Package" — an alignment that features Jackson, Griffin and 2009 winner Mark Ingram.

This week, Griffin's task is to put a ribbon on Baltimore's magical regular season. He's sturdier and wiser than the 2016 version of RG3, who threw three interceptions and just two touchdown passes for Cleveland.

“I was playing with a broken shoulder back then,” Griffin said. "I'm healthy and I've learned a lot. To be in the position I've been in the past two years, you're either upset about it and don't work, or you're upset about it and you work. I worked through it.

“I just try to be a testimony to everybody who's ever gone through something — keep fighting and eventually you'll come out on top," Griffin said. “Hopefully you get Lamar Jackson as the starting quarterback and you get an opportunity to play in the last game of the year.”