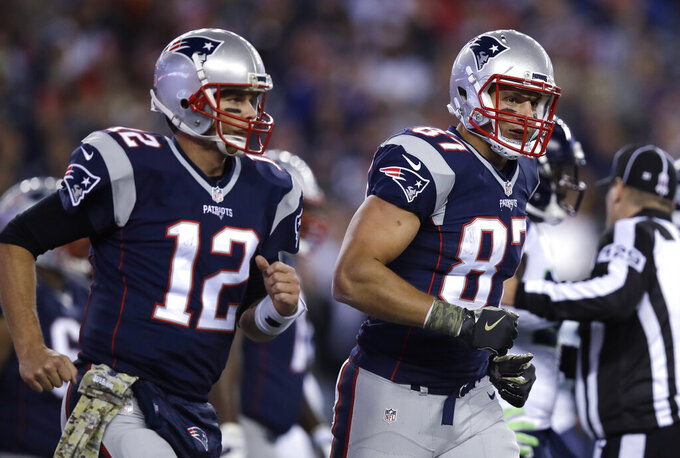 FILE - In this Nov. 13, 2016, file photo, New England Patriots quarterback Tom Brady (12) and tight end Rob Gronkowski head to the sideline during the team's NFL football game against the Seattle Seahawks in Foxborough, Mass. Gronkowski has agreed to a reunion with Brady. The agent for the retired New England star confirmed Tuesday, April 21, 2020, that pending completion of a physical, Gronkowski has agreed to play for the Tampa Bay Buccaneers, who are acquiring his rights from the Patriots. (AP Photo/Charles Krupa, File)

TAMPA, Fla. (AP) — Rob Gronkowski planted the seed for a NFL comeback when he played catch with Tom Brady two months ago.

He told the six-time Super Bowl champion quarterback he was getting an itch to play again if the “right opportunity” presented itself.

Brady, on the verge of becoming a free agent and signing a two-year, $50 million contract with the Tampa Bay Buccaneers, was more than intrigued.

“We had a little conversation. There was no pressure on either side. We actually got together just to throw the football,” Gronkowski recalled Wednesday, a day after the Bucs completed a trade to acquire the four-time All-Pro tight end from the New England Patriots.

“We rarely talked about what his decision was going to be or where I’m at. But we did talk about ... I'm kind of getting that fire underneath me again. I told him I’m definitely interested in the decision you make and ... even if you go back to the Patriots ... there’s a possible chance I will definitely love to reconnect,” Gronkowski added. “That’s where the conversation started ... and he was fired up.’’

The Bucs sent a fourth-round pick — No. 139 overall — to the Patriots in exchange for a seventh-round selection (No. 241) and Gronkowski, who retired 13 months ago after nine seasons and winning three Super Bowl rings with New England.

The 30-year-old said he will always respect and appreciate the time he spent playing for coach Bill Belichick and Patriots owner Robert Kraft, but he’s just as excited about starting anew with Brady in Tampa.

“I’m not going to sit here and say it’s that easy of an organization to play for,” Gronkowski added of his stint with the Patriots. “I do know ... it gets you right. It gets you mentally right. It gets you physically right. What I’ve learned there, I’m definitely going to take it with me and apply it to my daily life, big time.”

Gronkowski was one of the most dominant tight ends in the league with the Patriots, compiling 521 career receptions for 7,861 yards and 79 touchdowns — third-most TD receptions by a tight end in NFL history behind Antonio Gates (116) and Hall of Famer Tony Gonzalez (111).

The five-time Pro Bowl selection is one of just four tight ends, along with Gonzalez, Jason Witten and Travis Kelce, who’ve had four seasons with 1,000-plus yards receiving. With 28 career 100-yard games, Gronkowski ranks second to Gonzalez (31).

He said he walked away from the game after helping the Patriots win the Super Bowl in February 2019 to give his body a chance to heal from numerous injuries during his career.

“I was getting opportunities throughout the whole retirement to come back, which is special. ... But I’ve always said I wouldn’t come back unless I’m feeling good, feeling healthy and feeling like I’m ready to go,” Gronkowski said. “This is the time. It definitely wasn’t last year. My body 100% needed a rest.’’

During his nine seasons in New England, the Patriots won nine division titles and appeared in eight AFC championship games, advancing to five Super Bowls. In 16 career playoff games, he has 81 catches for 1,163 yards and 12 TDs.

The Bucs have played just 15 postseason games in the club’s 44-year history, none since 2007.

That’s expected to change with Brady and Gronkowski joining an offense that led the NFL is passing, and ranked third overall. The Pro Bowl receiver tandem of Mike Evans and Chris Godwin that caught 153 passes for 2,490 yards and 17 TDs last season figures to be the best Brady has had to work with since Hall of Famer Randy Moss began a three-plus season stint with the Patriots in 2007.

With O.J. Howard and Cameron Brate on the roster, tight end also was considered a strength even before Gronkowski was added to the mix.

Brady, though, is what made moving to Tampa, where Gronkowski once owned a home, especially appealing.

He said he's remained in shape and tipped the scales at 250 pounds Wednesday, about 12 to 15 below his normal playing weight.

“Playing with Tom is special. ... We have a great chemistry out there. Every time we get together, it’s just like the old days. It doesn’t matter if we take a month off or six months apart, we just go out there and we’re throwing the ball just like it’s a normal practice,” the tight end said.

“He was like the appetizer of the whole meal. He got me hooked when he went down to Tampa,” Gronkowski added. “I saw what was down there, just the opportunity to go down there and play with that type of offense. They’ve got some special wide receivers out there. They’ve got other great tight ends. ... It’s just the right opportunity.”