Gronkowski will be in Miami for Super Bowl as party host 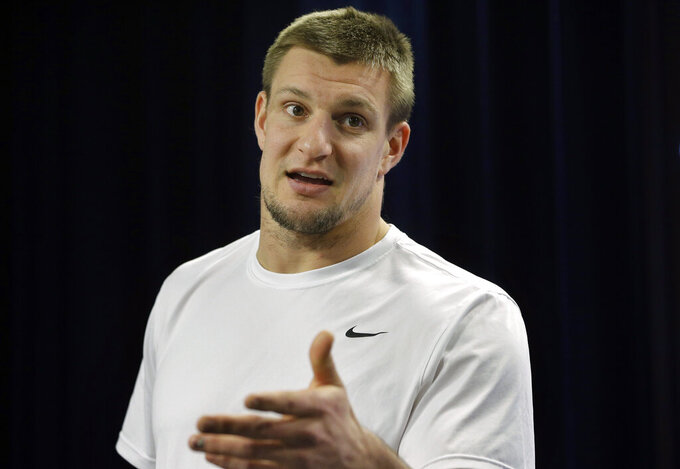 FILE - In this Nov. 28, 2018, file photo, New England Patriots tight end Rob Gronkowski speaks to the media after an NFL football practice in Foxborough, Mass. Gronkowski will be in Miami for the Super Bowl. He will not be preparing for kickoff with Tom Brady and the rest of his old New England teammates. Instead, the man who retired from the Patriots and the NFL in March will be hosting his first Super Bowl party. (AP Photo/Steven Senne, File)

MIAMI (AP) — Rob Gronkowski will be in Miami for the Super Bowl. The former Patriots tight end won’t be preparing for kickoff with Tom Brady and the rest of his old New England teammates.

Instead, the man who retired from the Patriots and the NFL in March will be hosting his first Super Bowl party.

And he’s doing it Gronk style.

The three-time Super Bowl champ is hosting the “GRONK BEACH” festival on Saturday, Feb. 1, on Miami Beach in an event featuring Gronkowski’s favorites and combining a party with a music festival along with food and drinks. Gronkowski says it’s because nobody really knows Super Bowl weekend like he does.

“I may not be playing the game this year, but I will still be going to Miami and I'm going to be debuting my very own music festival and its Gronk Beach,” Gronkowski said. “I mean, you can't ask for any other situation that better than that. Bring some wildness, some fun, to bring a music festival to Miami and not just on top of Miami, at the Super Bowl. It’s really never been done like that before.”

“Whoever is going to be playing that game, who isn't going to want to be at the party?” Gronkowski said. “So that might be the game. The game might be facing off behind the stage that weekend.”

Patriots’ fans have held out hope that the fun-loving, ball-spiking tight end would change his mind and rejoin New England ever since Gronkowski announced his retirement in March after nine seasons just shy of his 30th birthday. Gronkowski says they can console themselves by taking advantage of the chance to finally party with Gronk.

Gronk Beach will be set at the North Beach Bandshell between 1 p.m.-7 p.m. Tickets go on sale Thursday at www.GronkBeach.com starting at $149.99 for an event that will include a luau theme with fire twirlers and hula dancers. Gronkowski says he expects tickets to go quickly for an event that won’t feature only his name.

"It’s, we’ll be partying with everyone,” Gronkowski said. “We’ll be partying on stage, we’ll be high-fiving everyone. We’ll be interacting with the crowd. It's just going to be a great overall fun themed party where it just brings entertainment and joy to people's lives."