Gruden focuses on Raiders execution rather than Jets blunder 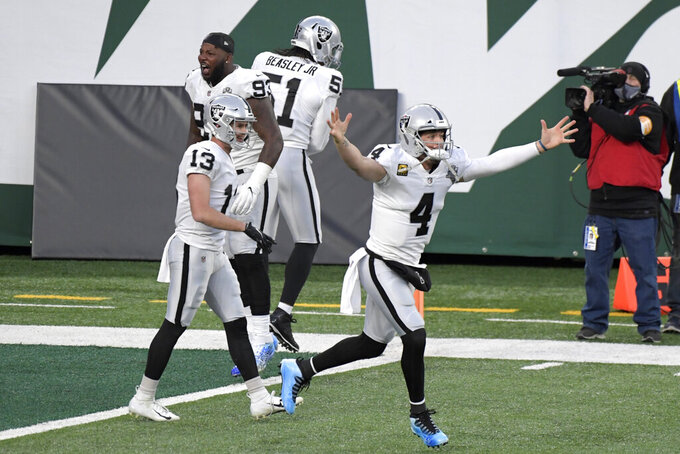 Coach Jon Gruden will let everyone else debate the decision to send an all-out blitz in the closing seconds that cost the New York Jets a chance at their first win and defensive coordinator Gregg Williams his job.

Gruden would rather focus on the things the Las Vegas Raiders got right on that 46-yard touchdown pass from Derek Carr to Henry Ruggs III with 5 seconds left to preserve their playoff hopes with a 31-28 win on Sunday.

“I think a lot of people are worried about that call that the Jets made,” Gruden said Monday. “What about the pick up that Darren Waller made on the edge? What about the blitz pick up by Jalen Richard? Are you kidding me? What about the throw under intense fire? And what about the route? That to me was as exciting and as amazing as any call that anybody made.”

The play capped a roller-coaster day. The Raiders (7-5) appeared to be in control with an 11-point lead in the fourth quarter against a winless team before everything began to fall apart.

They allowed a 96-yard touchdown drive followed by a fumble by Ruggs that set up the go-ahead TD. Carr then missed an open Nelson Agholor in the end zone on fourth down with 1:37 to play.

But the Raiders forced a three-and-out and got the ball back at their 39 with 35 seconds to play. Carr completed one pass to Waller to get into Jets territory. After a spike, he missed Agholor on a deep pass before connecting against the blitz for the winner.

That puts the Raiders in position for a possible playoff run with a three-game homestand against Indianapolis, the Chargers and Miami before a season-ending trip to Denver.

“I think we’re ready,” Carr said. “Time will tell if we can execute and do it at a high level. We have some really good football teams that are playing for something just like we are that are about to come to our place and try to take it from us. If we want to go where we want to go and do the things we want to do, we have to win football games. Everyone knows what’s at stake here. Everyone knows the opportunities we have and that’s why I’m super pumped about this.”

Waller. The tight end had 13 catches for 200 yards and two TDs, joining Jackie Smith (1963), Rich Caster (1972) and Shannon Sharpe (2002) as the only tight ends with at least 200 yards receiving and two TDs in a game. Waller came into the game averaging only 8.5 yards per catch, delivered several big plays, with six of his catches going for at least 15 yards, including a 38-yard TD. The only other Raiders player with that many catches for at least 15 yards in a single game in the past 30 years is Hall of Fame wideout Tim Brown, who did it three times in the 1990s.

Run defense. The Raiders were repeatedly gashed on the ground by Josh Adams and Ty Johnson and an offense that came into the game near bottom of the league in rushing. New York gained 206 yards on 34 carries (6.1 per attempt) with two TD runs. The Jets came into the game with the second-fewest runs that went for at least 10 yards (23) but had seven against the Raiders.

Clelin Ferrell. The second-year defensive end returned after missing two games on the COVID-19 list and made a major impact. Ferrell got his first two sacks of the season, stripping Sam Darnold both times. Ferrell, the No. 4 overall pick in 2019, joined Kansas City’s Chris Jones as the only players this season with two strip-sacks in a game. He was the first Raider to do it since Tommy Kelly in 2005 against the Chiefs.

DeVontae Booker. The Raiders' backup running back had thrived as a change of pace from starter Josh Jacobs, averaging 5.5 yards per carry coming into the game. But Booker was held to 50 yards on 16 attempts as the featured back with Jacobs out with an ankle injury.

CB Damon Arnette left his second straight game with a concussion. ... RB Josh Jacobs (ankle) and S Johnathan Abram (knee) both missed the game. ... RT Trent Brown was added to the roster after missing seven games following a positive COVID-19 test. ... Gruden said he wasn’t optimistic any of the four would be able to play this week but said he still held out hope.

20-798 — The record of teams that start a drive in their own territory trailing by eight points or less in the final 40 seconds since 2000 after the Raiders staged their comeback against the Jets.