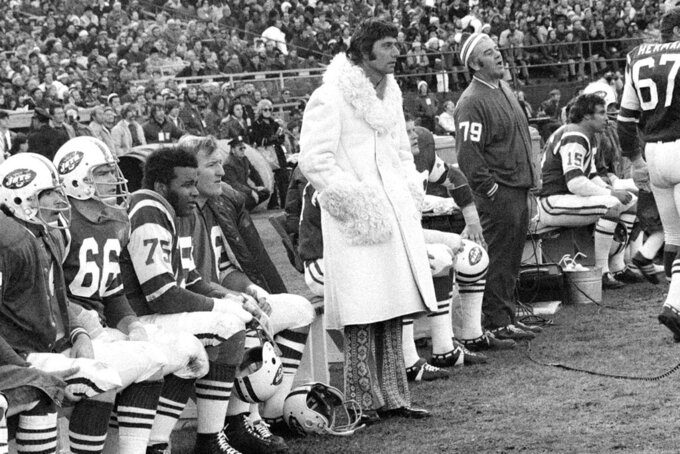 FILE - In this Nov. 14, 1971, file photo, New York Jets quarterback Joe Namath, wearing his white fur coat, watches from the sidelines as the Baltimore Colts defeat the Jets, 14-13, at New York's Shea Stadium. Namath is the NFL’s greatest character. Guaranteed. The Pro Football Hall of Fame quarterback who guaranteed his three-touchdown underdog New York Jets would beat the mighty Baltimore Colts in the third Super Bowl was a solid choice in balloting conducted by The Associated Press in conjunction with the league’s celebration of its 100th season. (AP Photo/File)

And an arm that would make Superman proud.

The Pro Football Hall of Fame quarterback who guaranteed his three-touchdown underdog New York Jets would beat the mighty Baltimore Colts in the third Super Bowl was a solid choice in balloting conducted by The Associated Press in conjunction with the league's celebration of its 100th season. Namath earned 2,577 points in voting by a nationwide panel of 60 football historians and media who regularly cover the NFL.

"Sonny (Werblin, the Jets owner) came from the entertainment business and he believed in the star system. He knew fans wanted to see stars," Namath said. "We thought of ourselves as just football players that nobody got to know except the guys we played with.

"I'll never forget this. I had dinner with the Werblins one night — this was late in the 1960s — and Sonny was telling me, 'You're a confident guy. Be more open, it will be better for everybody.' And I kept saying, 'It's just football. How much is there to talk about?'

"So finally, his wife leans over and says, 'Joe, don't worry, honey. It's all just show business,' and she turned out to be right. Sport was changing. Things were changing in society, too. ...

"All that action off the field? Some of it was good and some not so good. But thank God, we're still here."

Namath easily outdistanced the late Al Davis, owner of the Raiders and a former coach and AFL commissioner. Each had 12 first-place votes, but Davis wound up 162 points behind Namath.

Only Hall of Fame quarterback Brett Favre was on all 60 ballots. Favre finished fourth overall.

Namath's career numbers weren't spectacular, but his impact on the sport was enormous. The Jets' win helped validate the AFL and the merger that NFL owners accepted. It boosted the Super Bowl toward elite sports status; no event in America gets more attention or draws a bigger audience.

And Namath established the Jets as a force in a metropolitan area previously dominated by the Giants.

"I don't know that a day goes by that I don't get reminded of that game," Namath said. "I never get tired of talking about it. It's a memory that never gets old."

Consider, also, that Jets fans over the last half-century have not seen their team return to the big game, let alone win it. Namath remains the biggest hero in franchise history.

Also consider that when anyone participating in the NFL is lauded (or even criticized for) their behavior, Namath's name tends to get mentioned.

Davis was trailed in the voting by one of his coaches, John Madden. But Madden's persona is defined by his work in the announcing booth more than his work on the Raiders' sideline.

Favre's feistiness and gambling style as Green Bay's quarterback made him a natural choice for the top five, and he was followed by the flamboyant Deion Sanders.

Other characters in the top 30, which was revealed on NFL Network on Friday night, were colorful coaches Bum Phillips (No. 6), Mike Ditka (No. 10), Buddy Ryan (11th), Bill Parcells (12th) and Vince Lombardi (22nd); quarterback-turned broadcaster Don Meredith (17th); and such great-nicknamed characters as Chad (Ochocinco) Johnson at No. 14, Rob (Gronk) Gronkowski at No. 15, William (Refrigerator) Perry at No. 23; and Marshawn (Beast Mode) Lynch at No. 24.